A few particular works in the contemporary classical canon are known more by their reputation than by the actuality of performance or recording. Until the present decade, Brian Ferneyhough’s La Terre est un Homme would have sat high on any list of such cult works. The first performance was given in Glasgow by the Scottish National Orchestra and Elgar Howarth as part of the 1979 Musica Nova festival. There was a second performance a few weeks later in the Royal Festival Hall by the London Symphony Orchestra under Claudio Abbado, in his first concert as Principal Conductor of the LSO (boldly paired with Brahms’s Piano Concerto 1, Zimerman, and Tchaikovsky 4!). It is hard at this distance to separate fact from legend but it is said that the players (every one of whom has their own separate part in the score) openly revolted against what was seen as the absurd over-complexity of the writing and both performances were widely regarded as a disaster, the LSO one the less so. More diplomatically, Irvine Arditti, who was co-leader of the LSO at the time, has spoken of his front-desk colleagues struggling to play their parts and the back-desks nowhere near accuracy. Ferneyhough (born January 1943 in Coventry) was likely dismayed by the experience because he did not write again for large orchestra until Plötzlichkeit of 2006 (where a different approach is apparent).

La Terre apparently was not performed again until February 2011 when the BBC revived it, along with Plötzlichkeit, both works performed by the BBC Symphony Orchestra under the indefatigable Martyn Brabbins. La Terre est un Homme was inspired by a painting of that name by Roberto Matta and a dream Ferneyhough had, vividly described by the composer. What is most striking about the piece, at least on early acquaintance, is a primal, atavistic quality not generally found in Ferneyhough, in fact more exactly resembling the early scores of Xenakis. The overall impression is of a dense, massive skein of writhing sound, much propelled by apocalyptic drum writing. That a more or less single aural entity should be the result of a vast proliferation of micro-detail at the molecular level is a paradox which lies at the heart of Ferneyhough’s work generally. That said, for all its great originality, Ferneyhough’s score owes a debt in this regard to the micropolyphony of Ligeti’s work. And in turn I detect the influence of La Terre in such as Michael Finnissy’s Red Earth and James Dillon’s Windows and Canopies, and Helle Nacht. 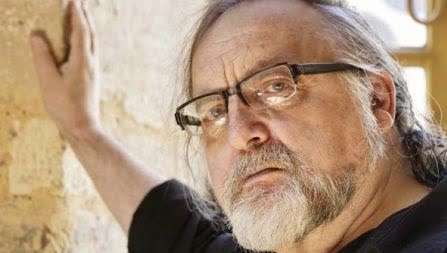 La Terre opens at a point of maximum entropy in Big Bang fashion and seethes its way grindingly and malevolently to the emphatic percussion gestures that are uncharacteristically clinching (compare the vanishing puffs of smoke that bring the other three works here to an end). The few chinks of light that do appear as the piece progresses encourage the vain hope that there might be many more to be discovered if one could only penetrate the black miasma wrapped around them.

Much has been written about the extent to which Ferneyhough expects, or does not, a one-hundred-percent accurate rendition of every parameter of his hyper-dense notation, with its multi-layered irrational rhythms, ultra-narrow microtones, harmonics and multiphonics. I hope I do no injustice to the complexity of the subject by saying that to some extent or other the act of aiming for the seemingly impossible is built into the drama of the music. It is also worth noting the view of Arditti, a tireless champion of Ferneyhough’s music alongside his quartet members, that not a single bar of the composer’s that he has played has been impossible. It’s all down to rehearsal time and pre-rehearsal study of the score in Arditti’s opinion, though admittedly his staggering virtuosity does help. With that in mind the performance of La Terre captured here must be counted a success of near-miraculous proportions.

The BBCSO and Brabbins could have been forgiven if they had played Brahms and Tchaikovsky in the rest of the concert, but no, they included more Ferneyhough! Plötzlichkeit (Suddenness) follows the path of Ferneyhough’s more recent music in being assembled, via arcane processes involving the number twenty, from a sequence of tiny fragments with no apparent connection besides the fact of having been placed there. This relates to the composer’s declared intent of the “denial of time” – a form of transcendence in the moment, with conventional matters of cause and effect obliterated. The edifice thus created – and the type of hyper-concentrated listening it calls for – is similar in effect to Stockhausen’s ‘moment’ form, although the degree of compression in Ferneyhough makes Stockhausen sound like Bruckner. Also Ferneyhough does not contemplate the possibility that the constituent parts could be re-ordered.

Compared to La Terre, everything in Plötzlichkeit is clearer and more tangible, although the degree of eventuation is also much higher. Ferneyhough even allows himself some more or less exact repetitions of phrases and some unison writing here and there, surely in recognition of the need to approach orchestral part-writing with at least a slightly broader brushstroke than for solo and ensemble composition. There are also some exquisite touches in the instrumentation. A cimbasso, a sort of contrabass trombone of the type beloved by Italian-opera composers, such as Verdi, effectively substitutes for tuba. And three female voices, often singing in chords, are embedded in the fabric of the orchestra, a magical and mysterious touch – not least because they only appear occasionally. Once again the BBCSO and Brabbins tackle the work heroically, and the singers achieve wonders of ethereal silver.

The vocal writing in the early (1969) a cappella Missa Brevis is more conventional of utterance, but only if your yardstick is more-recent Ferneyhough. In every other respect its febrile but crystalline soundworld was light years away from anything else in British choral music of the day. Its five movements (no ‘Credo’) traverse a variety of vocal and notational techniques, culminating in an astonishing moment of “ascent into the heavens” at the end of the ‘Agnus Dei’. Missa Brevis has been recorded before, by the BBC Singers under Odaline de la Martinez on the Metier label. I would not be so bold as to compare the performances for accuracy but the BBC Singers bring a more histrionic tone to the work and that final gesture, almost radiant in EXAUDI’s take, is quite terrifying from Martinez. Missa Brevis curiously occupies a very similar position in Ferneyhough’s output to that of A Boy Was Born in Britten’s – the announcement of a major new talent writing for chorus – although you would struggle to find any other point of contact between those two composers.

The most recent work here is Liber Scintillarum (2012), commissioned by ensemble recherche. This is a sextet (it sounds like a bigger ensemble) that consistently favours treble registers, so much so that the bass-clarinet cadenza toward the end comes across as a sudden and threatening invasion. The otherwise generally high tessitura carries with it a sense of playing at the extremities, which always in Ferneyhough comes with the connotation of enquiring what lies beyond the border. Although composed in a similar fragment-form as Plötzlichkeit, the later work has a more delineated trajectory, whereby a hushed string-trio segment at around the halfway point causes the earlier brilliance to collapse in on itself. Pools of silence flow into the textures, in a manner not unlike the latter parts of Jean Barraqué’s Piano Sonata, that mother-lode of post-war modernism – a reminder perhaps that for all that Ferneyhough (along with others) has taken music to new levels of linguistic and semantic complexity, his work has roots in the total serialism project of the 1950s and 1960s.

NMC’s major contribution to the promulgation of Ferneyhough’s music has hitherto been its recording of the theatre work Shadowtime (NMC D123). If memory serves, NMC also attempted to revive the Decca Headline recording of Transit but without success. Without any doubt the current release is of the highest importance in its own right, a jewel in NMC’s already glittering crown and should advance the standing of Brian Ferneyhough everywhere as one of the leading composers of today.