Bruckner
Symphony No.7 in E [The Edition used is not stated]

This is the second release on the Chicago Symphony Orchestra’s own label, CSO-Resound, and follows their Mahler 3, which was also conducted by Bernard Haitink. Haitink has long experience in this repertoire, his first recording of Bruckner 7 having been made in 1966. Here, in his third commercial recording, Haitink delivers a slightly reserved performance, which has something of a classical feel. Although it carries a sense of line, which keeps the listener involved throughout, some might prefer greater intensity. The coda of the first movement is a little perfunctory, for instance, and the crescendo for horns and Wagner tubas from 19’17” in the Adagio lacks the throat-catching quality that one finds in a number of other versions. On the other hand, the playing of the orchestra is often very beautiful, and the trio of the scherzo is particularly well characterised.

Haitink adopts unexceptional tempos for the most part, although, surprisingly, he ignores Bruckner’s a tempo instruction at bar 315 in the finale (at 11’44”), resulting in an unduly slow coda, the symphony limping to a distended final chord. Karajan, Wand and Tintner, in their recordings, show how the coda is all the more effective for being taken at the flowing speed Bruckner intended. 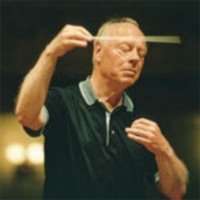 With regard to the performing editions, the main difference between Haas and Nowak in the Seventh Symphony is that the latter includes a cymbal crash, triangle and timpani at the climax of the Adagio. Nowak also involves some other minor changes to the orchestration and some additional tempo changes in the finale. Most conductors, including Haitink, mix features from both editions. In this recording, Haitink generally follows Nowak, most notably with the cymbal crash in the Adagio, although he reverts to Haas at the very end of the movement by having the strings play four rather than eight pizzicatos. Such details are not annotated in the booklet.

The dual-layer disc is playable in both CD and SACD players. Despite being recorded in SACD quality, the sound is somewhat close up and lacking bloom: the violins sound thin and the brass comes close to harshness. The ‘surround sound’ option provides marginally more space around the instruments but is otherwise little different.

Haitink is arguably the finest living interpreter of Bruckner and this recording is generally satisfying, but it is not the great performance that one might have hoped to hear. Among modern performances, Barenboim’s with the Berlin Philharmonic on Teldec is my first choice, although Karl Böhm’s extraordinarily moving 1943 recording with the Vienna Philharmonic, when available, is worth a place in any Brucknerian’s collection.