Elgar
Symphony No.1 in A flat, Op.55 [Transcribed for piano by Sigfrid Karg-Elert]
Alan Bush
Piano Sonata in B minor, Op.2

Mark Bebbington has already made several recordings for SOMM: including music of Frank Bridge, Malcolm Arnold and Constant Lambert as well as Mozart and Castelnuovo-Tedesco. This present release sees Bebbington tackling what sounds like some considerable technical and musical challenges in Sigfrid Karg-Elert’s piano transcription of Elgar’s Symphony No.1. As a pendant to the symphony, we have Alan Bush’s Piano Sonata, from 1921, of which Bebbington gave the first known public performance in 80 years, in 2006.

Following the success of Elgar’s Symphony No.1, his publishers Novello commissioned a piano reduction of the work for domestic use. However, the German composer Karg-Elert’s solution (published in 1909), despite its ingenuity, could hardly be said to be within the reach of amateur pianists, and it quickly sank into obscurity. Karg-Elert (1877-1933), who is perhaps best known for his considerably body of works for harmonium and organ, was nevertheless later to transcribe Elgar’s Second Symphony and Falstaff. 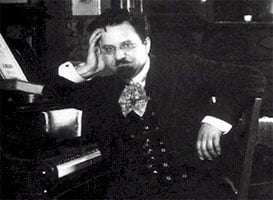 This transcription does provide an incredible listening experience though, especially when played with Bebbington’s combination of fire and lyricism. If, as in the second movement, the piano’s limitations in terms of timbral differentiation sometimes result in a series of almost unpleasantly crashing sonorities, those very limitations can also, as in the last movement, result in a satisfyingly titanic struggle as the music attempts to break out of its wooden and metal confines. The effect is very exciting. The Adagio third movement seems the most pianistic, and is beautifully rendered by Bebbington.

It is interesting to listen to this recording in three ways: with orchestral score in hand; without the score, but with Elgar’s original still firmly in mind; and as a purely abstract piano work, like some great, Lisztian sonata. All three have their attractions, but personally (and perhaps controversially!) I find the third the most liberating and stimulating. It’s an approach that also leads more naturally to Alan Bush’s finely-turned one-movement Sonata in ternary form that is unashamedly late-Romantic in idiom, though with modern flourishes. Here Bebbington is an equally effective advocate; one hopes this work of Bush (1900-1995) will make it into concert programmes on a more regular basis.

Good recorded sound, excellent booklet notes by both Robert Matthew-Walker and Bebbington himself and printed musical examples from Karg-Elert’s transcription (there should be a warning, though, like “Don’t try this at home!”). This a very attractive release indeed.