It seems not long since I reviewed Hyperion’s first recording of this music – a superb LP containing the first two opuses of Haydn’s Opus 71. At that time (1982) the use of period instruments was unusual and the Salomon Quartet were then at the height of its powers.

The Takács Quartet uses modern instruments and plays at today’s pitch but the sound is reminiscent of the gut-strung instruments of the 18th-century. Lightness of tone is a feature of the Takács group-persona and this allows inner parts to emerge with great clarity. I compared the performances of Haydn’s Opuses 71 and 74 as contained in the complete set by the Aeolian Quartet and there are similarities, particularly regarding tempo where, Minuets apart, the playing-times rarely differ by more than a few seconds: the Takács musicians are consistently faster in these movements than the Aeolian players, but it’s interesting that leader Emanuel Hurwitz remarked that if performing the music again he would probably play Minuets more quickly.

On looking back at great ensembles of the past that have given us admirable Haydn, including the Aeolian and adding the Hagen and Schneider Quartets, it seems that the Takács takes a less robust view while still accommodating the musicians’ personal phrasing within firmness of tempo. Occasionally there might be a relaxation before a double bar to make a small emphasis – but, generally, forward motion is of the essence.

Of the works here recorded by Hyperion, the first two of Opus 71 are a little more severe, with less evidence of Haydn’s buoyant spirit. The generally straightforward performances of these two works by the Takács Quartet do not seem to illuminate them further. I find the most notable movement of the B flat to be the vigorous Minuet. Here the players seem to want to imply something – I am not sure quite what – by winding down tempo and dynamics both before the Trio and before the return of the Minuet. I feared that this rather romantic whim might perhaps invade all the Minuets but it is confined merely to this one example.

There is also a surprising one-bar rest between Minuet and Trio in the D major but I believe that there are scores, to which I do not have access, which indicate this. This work is the only one of these six to commence with a slow introduction and the first movement is certainly shaped in a dramatic way. On the other hand, the Allegretto finale is somewhat understated – especially when, two-thirds the way through, Haydn’s switch of tempo to Allegro is marked by no more than a modest increase in speed. The light-hearted nature of the E flat is well realised and the jolly finale leaves the listener with the feeling that all is right with the world. In this work the clean, precise, poised style of the Takács musicians is consistently evident. 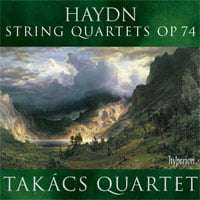 Opus 74 is approached with a little more intensity and an interesting feature of the C major is the gentle touch with which the Andantino grazioso is performed. All the Minuets are taken quite swiftly with this one especially so. I found it interesting to re-visit the Endellion Quartet in this movement – they take a very broad view: a minute-and-a-half longer. This was a fascinating comparison because both performances are entirely convincing.

The first movement of the F major is unusual in form – it is all marked Allegro spiritoso but the forceful first eight bars never reappear, the da capo marking for the exposition is placed at bar 9. The Minuet is strong, and the Presto finale is given a liveliness which I might have preferred given to other similar movements.

The popular and much-recorded ‘Rider’ Quartet is a gem and a challenge to any ensemble – all manner of moods lie within its tuneful exterior. Here a characteristic of the Takács approach that had slightly worried me during other slow movements becomes much more obvious. After a very lively opening Allegro there comes a withdrawn Largo assai which demands the most-tender playing. The Takács players clearly realise that there is something special about this music but they approach it in a very subjective way. The simple four-note opening phrase is dramatised by a pause before its final minim then the succeeding phrases are shaped so fully that the fortissimo marking at the eighth bar makes very little contrast. There is also considerable freedom of tempo – a characteristic less-evident in the other performances of the slow movements. This approach is by no means insensitive but it would be far better suited to the music of Schumann. The remaining movements are spick and span with the delightfully equestrian finale splendidly precise and firmly rhythmic.

Despite reservations I am impressed by these interpretations, apart from the few instances when a certain amount of ebb and flow is imposed. In general there is a refreshing lack of wilfulness and the music is expounded with great clarity. There is excellent sense of structure and the choice of repeats is very logical – exposition da capos are made in all sonata-form movements, and all of them are made elsewhere. The usual convention of Minuet repeats before Trios but not after is adhered to.

Recorded balance is admirable throughout with a welcome avoidance of the common habit whereby the first violin is unduly forward – a very equal instrumental partnership is portrayed by recording engineer Simon Eadon. Because of this admirable definition the considerable resonance of the venue enhances the quality without ever clouding the lucidity provided by the Takács Quartet.