JoAnn Falletta has made numerous recordings, including quite a few for Naxos. The Ulster Orchestra is no stranger to the studio, either. But this is the first ‘red-light’ time together for the Belfast-based ensemble and its new Principal Conductor; Falletta assumed the position in May 2011. A disc of rarities from Gustav Holst (1874-1934) is the opening offering, a collection of attractive works, although there are few signs of his later defining opuses such as The Planets or Egdon Heath.

Given Falletta is a native New Yorker, opening the disc with Holst’s Walt Whitman Overture is a smart move. Whitman (1819-92) was also from that city. The Overture, written in 1899, seven years after the poet’s death, found the composer (then in his mid-twenties) much attracted by the writer’s output. His musical response bustles and blossoms exuberantly, with some sweet lyricism along the way; this is the Englishness of Parry and Stanford (although it’s almost too easy to say this) but Holst’s confidence is his own.

The Symphony known as ‘The Cotswolds’ (1900) is lopsided movement-wise, opening with one that is perky and uncomplicated: robust, folksy and with a slap of the tweed-wearing thigh. This non-symphony (let it be said) includes the eloquent and deeply felt ‘Elegy (In memoriam William Morris)’. Morris (1834-96) was an English textile designer, artist and writer and has been described as a “libertarian socialist”. The more one listens to Holst’s tribute to him, the more one finds in it; the climaxes sear and are positively horn-capped or trumpet-laden (making Richard Strauss seem shy). The final two movements might be better reversed, for the amiable opening of ‘Finale’ seems an anti-climax (and we also wait a little too long for it) after the hale and hearty ‘Scherzo’ in which the composer revels in rhythmic ingenuity, deft scoring and culminating excitement; that said the last movement has much melodic charm and Holst continues to keep his eye on a celebratory conclusion. 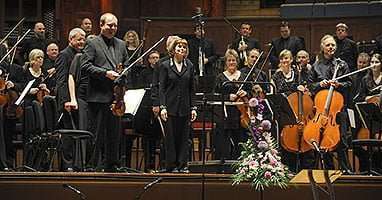 Holst may have born (as Gustavus Theodore von Holst) in a quintessential part of green England, Cheltenham to be precise, but his family background was a mix of Scandinavian, German and Russian; and his interests included mysticism and astronomy. The rest of the music on this release leans to the exotic and to story-telling. Indra (1903) is the longest single movement here (16 minutes) and concerns the god of heavens as well as conflict; one hears storm clouds in this dramatic orchestral narrative, scored with sensuous iridescence. It’s a gripping and thrilling piece, full of atmosphere and suggestion. A Winter Idyll (1897) is also vivid – pulsing, shapely and frostily decorative with a real sense of purpose. Whereas the six vignettes of the Japanese Suite (written while The Planets was in full production) are evocative and haunting, moving easefully from one movement to another with precise imagination and far away from pastiche.

Japanese Suite aside, which is 42-carat Holst, the other works here may be thought of as no more than interesting, but they certainly help to form a complete picture of Holst’s composing career. They have been recorded before but not necessarily with the level of engagement and revelation to be found on this Naxos issue.

The Ulster Orchestra responds excellently to its recently appointed conductor. The brass section is especially notable, heroic horns, fearless trumpets and – Holst’s own instrument – growly trombones. A fuller string sound with more bass would at times be desirable, but the recorded sound is spacious, lucid and dynamically expansive. There is no doubt that a distinctive partnership is being forged between JoAnn Falletta and the Ulster Orchestra. Future releases are keenly anticipated.