Pickard
The Flight of Icarus
The Spindle of Necessity
Channel Firing

John Pickard’s The Flight of Icarus (1990) immediately grabs the attention – a graphic score for large orchestra that begins, to quote the composer, with “lift-off” and builds energetically to describe the increasingly reckless flight of Icarus until he gets too close to the sun and his wings made of wax melt. Musically dramatic and with a sure sense of narrative-purpose and power, Pickard (born in Lancashire in 1963) is motivated by more than the famous Legend, namely “that human endeavour inevitably generates catastrophe.” One senses Icarus flying high and with vistas opening out before him; one also becomes aware of underlying danger; the symphonic structure is both musically delineated as well as embracing of emotion and imagery. The Flight of Icarus is a strong and concentrated work, accessible but not contrived to be liked; the final section – after Icarus has fallen into the sea – is pulsing and expressively decorated and especially compelling. 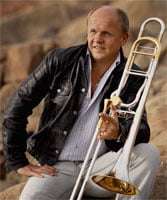 The Spindle of Necessity (1998) is a trombone concerto – but not composed for Christian Lindberg, rather it was first-performed by Mark Eager. The orchestra consists of strings and percussion. The extra-musical stimulus once again plunders Greek Legend, this time from Plato’s “Republic”, the tale of a Greek soldier killed in battle who “returns to recount his experience of the afterlife and the workings of the cosmos.” The trombone represents Er, the soldier (first heard in a solo soliloquy from afar). Circles, pillars, light, stars and planets are all part of the soldier’s account and all is iridescently suggested by Pickard’s use of his chosen instruments and his ability to conjure something from beyond, something ancient, the strings and percussion responding to the ‘words’ of the soldier as intoned by the trombone. Musically lyrical and effective, the extra-terrestrial suggestions of the opening give way to quicker and more-rhythmic invention, the trombone remaining descriptive, the orchestra responsively otherworldly as souls journey through Heaven. Some rhythmic pulsation in the closing section takes the listener back to the corresponding part of The Flight of Icarus and three violins sounding from the distance seem to correlate Pickard with Vaughan Williams, specifically his Fantasia on a Theme of Thomas Tallis. (Pickard is General Editor of the Elgar Complete Edition.)

Channel Firing (1992-93) is dedicated to the memory of William Mathias, Pickard’s composition teacher (Louis Andriessen was another of Pickard’s mentors), the composer’s impulse being Thomas Hardy’s poem (“Channel Firing” is helpfully printed in the booklet), pre-emptive World War One prose concerning a churchyard-at-night disturbed enough by gunfire for the dead to awaken believing that Judgement Day has arrived. This is a richly atmospheric score, darkly militaristic and eerily expressive until violence and alarm spill over. This is music that mourns and rails (the Wagner quotation that Pickard admits to, from “Götterdämmerung” (The Twilight of the Gods), is enigmatically embedded into the texture, and one might ‘hear’ too something of Holst’s, also-Hardy, Egdon Heath, certainly in the depths of the orchestra). Of the three Pickard pieces here, Channel Firing may prove to be the most enduring and fascinating.

One may count these recorded performances as near-definitive; the composer was present at the sessions and he has also written the booklet note. That said, there is just a slight doubt as to whether the faster music in The Spindle of Necessity is slightly under tempo (it isn’t quite the “swift and athletic” that the composer writes of), and the recording, while superbly vivid, does seem to relegate the strings a little in The Flight of Icarus. However, this trio of works, the longest being the 25-minute Channel Firing, are each worthy of the audience and posterity that this fine release has afforded them.