This collection of Jorge Bolet’s RCA recordings featuring original LP sleeves coincides with that of another dedicated to Charles Rosen, and if their careers have one thing in common, it is neglect. Charles Rosen was almost completely ignored by the record companies early in his career, then after a relatively brief dalliance with the Columbia label, sank back into obscurity as his career as a writer, critic and commentator took-off, while Bolet’s vocation remained in the doldrums (despite him being born in 1914) until 1974, when he gave a concert at Carnegie Hall (included here) that virtually overnight propelled him to stardom, after which he never looked back.

Trying to find reasons for Bolet’s obscurity is not easy. Maybe being Cuban didn’t help. In 1940 casual racism was very much the norm and a reviewer of a Carnegie Hall recital reported “… like many Latins, he is inclined to consider practically any piece a legitimate place to hang a curtain of shimmering, aqueous sound texture.” Havana (where Bolet was born) was seen by the West as a city packed with exotic bars and casinos (often of dubious repute) and certainly not the sort of place that could produce a great pianist; indeed Bolet suggested in a 1970s’ interview that if he had had a Russian name things might have been different.

It is tempting to think that because we now associate Bolet with the Romantic repertoire and its performing tradition there may have been an element of snobbery in the sometimes lukewarm critical response he received, but when he started giving concerts the programmes, certainly at Carnegie Hall between 1942 and 1947, are challengingly diverse and wide-ranging. It has also been suggested that Bolet’s recitals were of varying quality and if he wasn’t in the mood to perform it showed.

During the 1950s (the start of the LP era) Bolet made only (according to the excellent discography by Farhan Malik and Michael Glover) five recordings, the first four of which were for obscure labels. However in 1959 he made his first RCA LP (a mono issue featuring a selection of Liszt’s Transcendental Studies) and it says something that he would wait another fourteen years before he recorded for that company – or any major label – again, despite his making the soundtrack to the 1960 Hollywood biopic, Song Without End, starring Dirk Bogarde (which bore a passing resemblance to the life of Franz Liszt), although he was scorned for such an association. He did record for such as Everest, Colosseum and Ensayo, two of which – a selection of Liszt pieces from the 1850s and the complete Transcendental Studies – made their way onto RCA Red Seal, and in 1972 Bolet signed a contract with that company, which was then cancelled by the new head of the classical music division, relics of which are Great Rachmaninoff Transcriptions and yet another Liszt recital that was lost in the archives and re-surfaced in 2002 as Bolet Rediscovered; which brings us to 1974 and that concert. 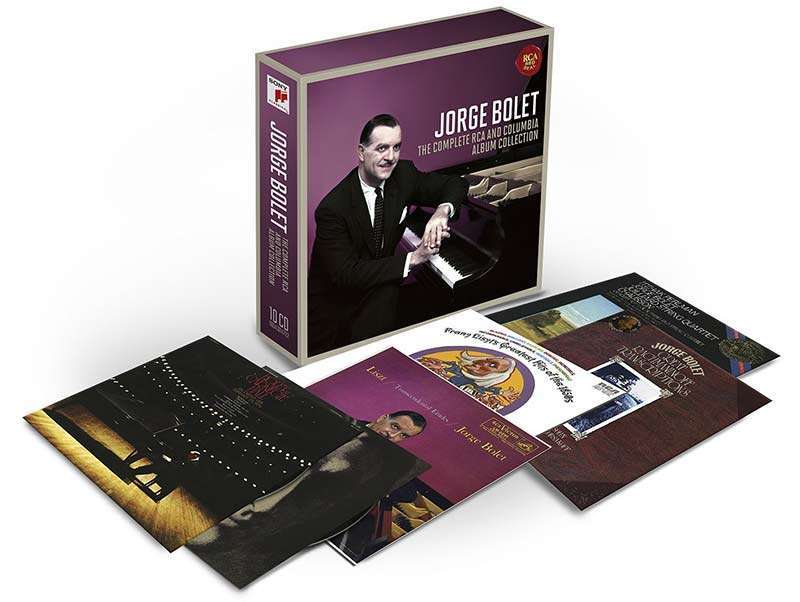 Here Bolet programmed Bach (Busoni’s transcription of the solo-violin Chaconne), Chopin’s 24 Preludes, various virtuoso transcriptions, plus Liszt’s magnificent arrangement of the Overture to Wagner’s Tannhäuser. The results are stupendous. The Chaconne is measured, with generous use of the pedals, tempo variation, rubato, huge weight and attack, and when needed dazzlingly even and precise finger-work. Bolet is thought of as a Liszt specialist, but he played just as much Chopin, and from the opening bars of the Preludes one is gripped by the sense of command, originality of expression, rich tonal palette and tremendous dynamic range; a classic account.Bolet opened the second half with showstoppers on themes by Johann Strauss II by Carl Tausig and a gloriously OTT confection entitled Concert Arabesques on Motifs by Johann Strauss – By the Blue Danube by Adolf Schulz-Evler. Bolet, with a golden-age technique, simply enjoys himself, throwing caution to the wind, and revelling in the gorgeous arabesques of sound he can create, rarely found on his studio recordings. Bolet’s performance of the Tannhäuser Overture belongs to the gods; no-one has ever played it with such incredible power and majesty or graded the climaxes so that the final pages become an overwhelming tidal wave.

It is however a tragedy that the re-mastering is so bad. On the original LPs there was slight treble emphasis, but Bolet’s huge tonal and dynamic ranges were beautifully captured, as was the Carnegie Hall acoustic. The LPs were re-issued as a digital transfer with some loss of body and presence, but the sound was still acceptable, and now we have sound that is clangourous with a harsh treble. A former pupil of Bolet told me that this bears absolutely no relation to the sound he produced and referred back to the LPs as a benchmark.

How does Bolet fare in the studio? In the 1959 Transcendental Studies (selections) there is some beautiful pianism on offer, the textures are transparent, the touch exquisitely varied, there is power in reserve, the legato line beautifully maintained, yet there are many occasions when it seems too safe, and the tension and atmosphere slip. Things are not helped by the boxy, metallic sound, which is not typical of RCA mono releases of the period, but it is difficult to say how much of this is down to the original tapes and how much to the transfer. There is also a question mark over the label shown on the centre of the CD, which looks like a cheap alteration of what is known as the first Shaded Dog label, where the original multi-coloured Nipper logo has been replaced with a smaller white version and the plum-coloured background shading lost.

Bolet was in better form when he recorded the Transcendental Studies for Ensayo in 1970, with the RCA recording team of John Pfeiffer and Edwin Begley. Here the concentration is more intense and while ‘Feux follets’ remains earthbound, the second section of ‘Wilde Jagd’ laboured, overall there is more poetry and a greater sense of power. The sound is better, if still someway short of ideal, because of the brittle treble and a loss of fullness in the midrange and bass, which is not present on first-label Ensayo/Pye English LPs that were used for comparison. It is also worth noting that this rendition of the complete Studies is superior to what Bolet (who died in 1990) recorded for Decca sixteen years later. Liszt’s Greatest Hits of the 1850s is a selection of Concert Paraphrases, Reminiscences and arrangements of various songs and operatic numbers, of which Bolet gives eminently civilised readings, without ever really setting the house-on-fire … and the sound is brittle.

Although Liszt is one of the great composers, there does come a point where you long to hear Bolet in something else, so the Great Rachmaninoff Transcriptions LP (1973) comes as something of a relief, especially when the performances are in the grand tradition, an expressive largesse that is now almost completely dead – or rather passé – as such the disc is a delight, and the sound is much fuller.

Outside of the Carnegie Hall recital the finest Liszt-playing is found on Bolet Rediscovered, which opens with a slow, dreamy, beautifully pedalled account of ‘Liebestraum No.3’. ‘Un sospiro’ has nobility and ‘Funérailles’ is suitably dark and – yes – funereal. One notes the incredibly precise right-hand trilling in ‘La campanella’ – Bolet had huge hands and the rocking tenths are, relatively speaking, easy – and the cheekily titled Grand Galop chromatique is full of rhythmic definition and prancing humour. The final piece is the Tannhäuser Overture, and while the sound is far better than at Carnegie Hall, the electricity of the live account is missing.

While Bolet’s concert-giving took-off after 1974, his recording career didn’t and he had to wait until 1977 to commence his association with Decca. In 1978 he recorded César Franck’s Piano Quintet for CBS, followed three years later by Chausson’s wonderful Concert for Violin, Piano and String Quartet. In both he was partnered by the rich-toned, sometimes rather slick Julliard Quartet and in the Chausson, one of the great violinists, Itzhak Perlman. In the Lento introduction to the Franck, the Julliard members attack the brief martial opening theme, only for Bolet to slow everything right down for the more expansive second subject. Throughout the movement (despite some thrilling passages) there is an element of start-stop, which becomes mildly irritating, especially when compared with Clifford Curzon and the Vienna Philharmonic Quartet on Decca. The opening of the slow movement is too literal and loud (here Alfred Cortot and the International Quartet are sublime) and partial amends are made in the finale which has plenty of drive and panache. The recording combines warmth and definition, the balance is excellent and the re-mastering doesn’t seem to have done any serious damage. Possibly because of Perlman’s presence there are no longueurs in the first movement of the Chausson, just a flowing, richly expressive rhapsodic account of this quintessentially – despite the influence of Wagner – French music, and the Grave slow movement (in which the harmonic richness is of Black Forest Gateau proportions) and the long finale are enthralling; this is one of the great unsung chamber recordings. The sound is early digital, but doesn’t lack depth and body, and while the LP better captures instrumental timbre, there is nothing particularly amiss with the transfer. In absolute terms one could say that Perlman is slightly too forwardly balanced, but he was notorious for spotlight-hogging, so the original recording team is to be congratulated on keeping this to a minimum.

In terms of presentation one has to ask why Sony Classical (with now has access to RCA’s recordings) does not provide downloads of the original sleeve notes (you need 20/20 vision and/or a magnifying glass to read them as they stand) and they do boast that these discs derive from 24bit/96kHz masters, so why aren’t these available as a download? Such files have greater presence and better reproduce instrumental timbre, which might improve the sound quality.

So a mixed bag, that might encourage listeners to explore Bolet further, perhaps – if you can find them – via two Marston boxes that feature mainly live performances. On balance, he surely deserves it.