Symphonies 1 to 8 recorded November 1951 to July 1955 in Kingsway Hall, London; Symphony No.9 recorded in July 1955 in the Musikverein, Vienna

This is, I believe, Herbert von Karajan’s finest Beethoven symphony cycle, and it is entirely fitting that it is issued as part of the centenary celebrations. This statement sits in the face of opposition from the conductor’s Berlin Philharmonic accounts, but nevertheless the Philharmonia Orchestra traversal holds a variety of jewels in its crown. Its consistency of interpretation is staggering, even if the Ninth does not knock the greats (notably Furtwängler’s) off their perches. The Kingsway Hall recording (except for the Ninth) stands up amazingly well; Walter Legge was the producer, Douglas Larter the engineer. This is a brand-new, 2008, re-mastering.

I believe this set sits with its head held high next to the 1961/2 BPO set (there are also re-recordings from 1975-77 and 1982-84). Karajan’s Beethoven has all the forthright traits of his youth, while demonstrating moments of the most heart-rending pathos. In addition, he is blessed with the supreme playing of the Philharmonia.

The First Symphony begins with an exquisitely shaped Adagio molto, with the tempo true to a Romantic’s interpretation of that indicator. The strings, in particular, play with particular care (one can hear the rehearsal that went into this). Deliberation informs the ensuing Allegro con brio (no exposition repeat), a foretaste, perhaps, of things to come. Yet the Andante cantabile con moto flows – how easy it is to believe it is a 3/8 time-signature – and is delivered with gallantry. Delicacy is of the utmost importance, too in the trio of the scherzo (for such it is here, despite the Menuetto marking in the score). The finale scampers magnificently.

There is an endearing freshness to much of the ‘Pastoral’ Symphony that Karajan was never to recapture later. The first movement even has its carefree moments, while the second movement’s painting of a brook flows persuasively and comfortably. The backward placing of the horns perhaps detracts somewhat from the hunting allusions of the scherzo (the ‘Storm’ loses nothing in impact, however), but when the oboe brings the sun out after the Storm, Karajan gives us a moment of pure magic.

The Seventh is one of Beethoven’s most magnificent creations. Karajan’s Philharmonia reading is expertly clean and one can revel, not for the first time in the cycle, in the woodwind solos. Again, one can hear the care Karajan poured into the opening Poco sostenuto, and into the transition to the Vivace, where flutes and violins echo each other. Tension does sag somewhat as the movement progresses (there is some mid-range loss of detail, also). Despite a beautifully sculpted Allegretto and an exciting finale, this Seventh remains a slight disappointment. Carlos Kleiber remains pretty much at the top of the league here (DG), and Kurt Masur’s earlier Leipzig Gewandhaus recording has long been a favourites (a somewhat surprising choice, I will allow). Muti (Philadelphia) similarly makes the adrenaline flow. 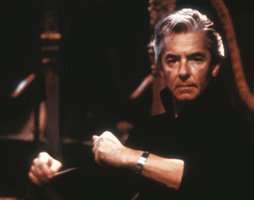 The Eighth Symphony (in stereo, the only such example here) sounds rather distanced, a fact that detracts from the opening’s explosion of energy and, later, from the dancing staccatos that abound in the first movement. It is as if the music is battling against the acoustic – and losing. The second movement (Allegretto scherzando) is similarly afflicted, and to its cost, the third (Tempo di Menuetto) is a harbinger of things to come in its cumbersome lethargy. Yet the finale contains passages that are light as a feather along with others that verge on the scrambled.

Karajan’s focus is far clearer in the ‘Choral’, recorded in the Musikverein, Vienna. It comes from a different world, in performance terms, than the Eighth. Immediately one hears a greater sense of commitment from all concerned. The recording, too, has more detail, yet includes a sense of space. Perhaps timpani could be clearer. What is most impressive about the first movement is the sense of mystery. Furtwänglerian overarching structure gives way to something that crawls its way into existence, and remains ever searching. There is some wonderfully alert playing in the scherzo and trio but it is with the slow movement that the performance moves into another realm – the world of the ‘late’ string quartets suddenly seems with us. Karajan’s achievement here is to marry beauty of execution with transcendent emotion, something he signally failed to do in his last studio recording of this piece. The sheer anger of the opening of the finale and the impatience of the cello and double bass lines indicates Karajan’s quasi-operatic take. His technique is such that sudden juxtapositions of thematic material (heard at their original tempos) seem shocking, even to ears that have heard this piece thousands of times before. The initial, orchestral, statement of the ‘Freude’ theme seems somewhat low in jubilation though and it is left to Otto Edelmann to lift the performance heavenwards. Even then, the chorus sounds a little the worse for wear and only picks up later on. The soloists need little comment. You either love Elisabeth Schwarzkopf or you don’t and Haefliger is equally luxury casting.

The Coriolan Overture begins in the most amazing way. Never, surely, have those unisons sounded so subterranean, so demonic. Unfortunately the tension sags later and the initial promise is never truly lived up to. Egmont is intensely dramatic, only slightly marred by a too-closely-miked trumpet. Wonderfully raucous horns, though!

The booklet-note is by Richard Osborne and date from 2003. The layout of including not just key and opus number, but also date of composition, the place and date of first performance, and scoring, is both logical and useful. As to the recording information itself, months and years are given (not actual specific dates), as is the venue. No source numbers are related. Even more strangely, though, there is nothing about Karajan himself; much less his take on Beethoven’s symphonies.