To say that these concertos are well represented in the catalogue would be an understatement. You can get everyone from greats like Gilels, Kovacevich, Richter-Haaser, Rudolf Serkin and Solomon, to more modern and interesting artists, such as Goode, Pollini and Uchida. And I suspect that many collectors acquire a disc such as this, in the hope – rather than expectation – that they will hear something genuinely revelatory and inspiring.

Lang Lang has a huge international fan club and seems to have inspired hordes of children to take up the piano, which can only be a good thing. However until I heard him play Tippett’s Piano Concerto recently, I cannot say that any of his discs or recitals had led me to believe that he was anything more than the product of hype. Certainly the booklet for this current doesn’t inspire much confidence. On the front you have Lang Lang spread-eagled against a steel garage door, looking very reminiscent of Edward Scissorhands. Then you have an essay that concentrates on the relationship between conductor and soloist and their admiration for one another, rather than the music.

The DVD is much of the same with the soloist being rather uninformative about the Fourth Concerto and he and Eschenbach talking about their first encounter. There are also clips from the recording sessions, which don’t add up to much.

In the Largo, once again the French orchestra is rather flabby, the melodic line isn’t moulded with any subtlety and the woodwinds lack individuality. Lang Lang is very Romantic in the first subject and the quiet sense of contemplation and spirituality that Davis and Bishop convey is absent. Later in the movement Lang Lang does find a great sense of peace, but rather than bringing emotional fulfilment, it only unbalances the piece. The Rondo is very good, so long as you ignore the bland orchestra. But the soloist is suitably unbuttoned and, as in the first movement, is never afraid to use tonal and rhythmic flights of fancy to reinvent scales and arpeggios. But to hear Bishop and Davis dance their way through this music is a joy; there is much humour and the woodwinds of the BBCSO are far superior to their Parisian counterparts. 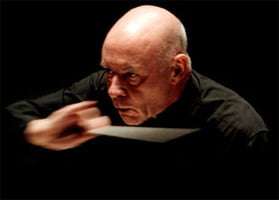 Beethoven’s Fourth Piano Concerto is one of the genre’s supreme masterpieces and a severe test for every pianist. After Lang Lang’s quietly authoritative initial chords, things go seriously awry. Eschenbach seems to think he is conducting Mahler, with some wilful distortions of note and chord lengths. To get away with this sort of approach, you have to be a Barbirolli or Furtwängler. Eschenbach is neither and as in the First Concerto, everything sounds rather weary and prosaic. There is also too greater relaxation of tempo in the second subject. Lang Lang’s approach is very similar to the First, but in this work, there has to be enormous power and impetus underlying the melodic outpouring. At this stage of his career Lang Lang doesn’t quite achieve this, being too concerned with minutiae. However in Beethoven’s own cadenza (the more familiar of his two) he does convey a sense of improvisation and there are moments when we seem to have entered the world of Rachmaninov, which I have no problem with. By contrast, Davis and Bishop are in total command – and at a faster tempo. Here there is underlying power and conviction in abundance, combined with enormous melodic and rhythmic variation and control.

Some rather E. M. Forster-like descriptions of the slow movement do seem to find credence in some quarters. In essence it is about forceful string chords pitted against the piano’s shifting harmonies, until string pizzicatos and piano trills announce the soloist’s conquest of the orchestra, whereupon the most profound peace descends on the combatants. All very simple and the very devil to bring off. Here the orchestra is absolutely vital. Davis’s strings are implacably abrupt and baleful and their dynamic progression beautifully judged. Eschenbach’s are rather flabby and unthreatening. Bishop’s responses convey timeless reflection, via the use of perfectly judged slight pauses and dead tone. Lang Lang is simply quiet. He cannot convey such spirituality and his trills are understated. The finale is a bit of a mess. As in the first movement the second subject is far too slow and the soloist sounds rather clumsy and brittle. At a faster tempo Bishop powers his way through the music in the most gloriously animated fashion and the orchestra give him incisive support.

Nevertheless there is much to enjoy on Lang Lang’s disc – it is almost worth buying for the cadenzas alone – but having heard Davis and the LSO accompany Lang Lang in Tippett’s Concerto, one cannot help but wonder how much better these performances would have been with them in partnership.

The sound is not special – as with most CDs it is too closely balanced and the piano even more so. There is no sense of the hall’s acoustic, just a void into which the performers appear to have been dumped. Nor is there any sense of flow or natural timbre with any of the instruments. To compare it with the two Philips LPs was depressing. As ever you realise just how superior vinyl is. There the sound is alive and breathes, instrumental timbres are far more natural and there is a sense of space around the performers. If you don’t have a turntable, or the original Bishop LPs, then you then you can get them on a Philips CD-twofer at budget price.