Sibelius
Symphony No.5 in E flat, Op.82
Symphony No.6 in D minor, Op.104
Lemminkäinen Legends – III: The Swan of Tuonela

A release in a thousand! Not so much keenly anticipated as believed to be lamentably lost, for it seems that Paavo Berglund vetoed these recordings’ release. One must respect that, of course, if be baffled as to why. On a particularly sad note, then, his death – and no doubt with the approval of his estate – now ensures that these wonderfully inspired performances can be permanent and universally shared.

Helsinki-born Paavo Berglund (April 1929-January 2012) was not only a great Sibelian (he recorded the symphony cycle three times complete and Kullervo twice, and there are ‘fourth’ versions of symphonies 4 and 6) but de facto a great conductor, the master of a wide range of repertoire (revelatory Brahms symphonies, for example, and notable interpretations of Bruckner, Shostakovich and Vaughan Williams). This LPO disc is not laid out satisfactorily, however; it is as listed. Ideally, it should be Symphony 6 first, then Swan of Tuonela, and finally the Fifth. As it is, the ascending to triumph Fifth comes first and is uneasily followed by the ‘cool’ Sixth. Of course, at home, one can choose the correct order. 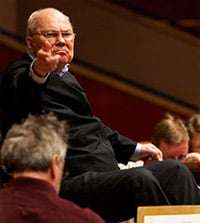 The Sixth Symphony, Sibelius’s musical equivalent to cold water, receives an outstanding, perfectly paced account, the Palestrina-like polyphony richly expressed and beautifully balanced. This is a masterclass in how this enigmatic work goes; transitions are seamless and Berglund finds the right amount of edge when required. However, the recording is of swings and roundabouts: laudably immediate and laser-light clear, but with a somewhat limited dynamic range that precludes the quietest of pianissimos. But it’s a superb performance, absolutely inside the music, revealing its secrets without giving the game away.

Final applause has rightly been removed if with a noticeable change of ambience for The Swan. (We are now in the Queen Elizabeth Hall.) The crescendo at the opening of the work is welcome. In an account notable for the icy suggesting of desolation, a swan gliding on black water, the cello and cor anglais solos are especially poetic (if a little brightly lit), and the bass drum rolls bleakly threatening.

As to the Fifth Symphony (relayed with a little more acoustic space and dynamic variety than the Sixth), throughout, Berglund’s wholesome vision is never once false or applied. Like Klemperer, he refused to varnish music, preferring a direct honesty that suits Sibelius’s music fabulously well. This rendition of the Fifth, monumental if yielding, is cut from granite, and has a thrilling inevitability to it, the performers – the LPO plays magnificently – totally at-one with Sibelius’s logic and largesse, inspired by Berglund’s rigour and telepathic understanding of this great music, a conductor not afraid to roughen a detail to bring it through without bringing a charge of impropriety to either himself or the creator. Berglund was also alive to shape; here the slow movement sings, as part of a performance that conjures fjords, mountains and leviathans clothed in monumental symphonic thinking and a contrapuntal mastery that is ruthlessly exposed to advantage. The finale’s ‘Swan Hymn’ really opens out to inspire us (Berglund had six horns on the night rather than four), the double basses’ col legno effects are there to be heard, and the ‘climb’ to the final bars is magisterial. This time, the lack of applause is missed.

Some production brickbats aside – the editing between works and between movements is rudimentary – this is a rousing release. Might ‘Lemminkäinen and the Maidens of Saari’, which opened the September 2006 QEH concert (Classical Source’s reviewer calling it “a quite electrifying reading of enormous power and conviction”), find its way to also being issued? Meanwhile, don’t miss Berglund’s exceptional Sibelius, as captured here.