The box, with lift-off lid, is substantial in size, the booklet equally so, to respectively house and accompany this treasure-trove of Pierre Boulez’s “ŒUVRES COMPLÈTES”, an enticing 13-CD project supervised by the composer and superbly presented by Deutsche Grammophon (most of the recordings chosen are from the decades of the 1980s, 90s and 2000s, and some are borrowed from other companies). On the back of the box, however, is a phrase more associated with the great French composer and conductor: “WORK IN PROGRESS”. As anyone who has followed Boulez’s compositions will know, some of his works remain in a state of revision, if still performable, although others have been withdrawn, a reflection of his ongoing requirement for refining and perfecting certain pieces. What we have in this release is “complete” as deemed by Boulez as at the production stage of the set and thus carried forward to its release in June 2013, a considered self-portrait of a great music-experimenter, one of the most influential and charismatic musicians of his time, who at the age of 88 (he was born on 26 March 1925 in Montbrison) hopefully remains active and creative despite unfortunate current eye problems that have limited his conducting activities – recently he withdrew from two of weeks of Chicago Symphony Orchestra concerts. With any luck, Boulez still has the resources to write the once-proposed violin concerto for Anne-Sophie Mutter and also to complete the orchestrations of his twelve Notations, originally for piano. 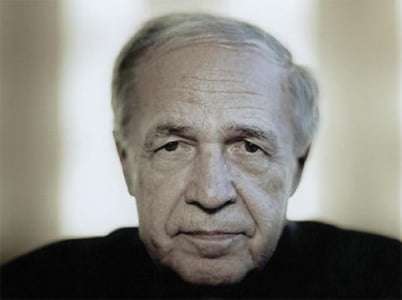 And it’s with that cycle that the first compact disc opens, the twelve miniatures for piano, each of twelve bars (the longest lasting two minutes with several playing for less than half that length) that Boulez composed in 1945. The concentrated pungency of the sequence embraces whimsical to aggressive, here brought off with total commitment by Pierre-Laurent Aimard, who reveals that each is a gem. Then there is the cool angularity and fluttering of the Sonatina for Flute and Piano (1946, Sophie Cherrier and Aimard) and the craggy explorations of the Piano Sonata No.1 (from the same year, Aimard again). The 30-minute La visage nuptial (originally from 1947, revised in 1952, withdrawn, and further revised in 1989 to definitive effect); to texts by René Char the score is luminous, voluptuous and thrilling, rather Bergian, and it’s a colossal achievement in this Erato recording with the composer conducting BBC forces in 1989. The second disc embraces Piano Sonata No.2, that masterpiece of the late-1940s. Maurizio Pollini’s account from 1978 has been chosen (there is a later one from another pianist in DG’s catalogue). From the arresting gesture that opens the explosive opening movement through to the work’s vaporous conclusion, Pollini is the total master of the Sonata’s many fluctuations of tempo and its volatile contrasts of mood. Pollini’s classic recording sounds quiet superb in the current re-mastering. Livre pour quatuor (1962 version) is a 40-minute cycle for string quartet in eight movements; tantalising music in its unpredictability and contrasts, cultivated and perfectly judged as performed by Quatuor Parisii on an Editions Assai release from 2001.

On CD 3 is the very combative Structures Livre I (1951) for two pianos with Alfons and Aloys Kontarsky, contrasted by the sensuous choral/orchestral (char again) Le Soleil des eaux (Fourth Version, 1965), glowing with expression, followed by one of the works that helped put Boulez on the map, and which has become a modern classic, the linear and crystalline Le Marteau sans maître, which seems to meld Debussy and Webern while setting Char’s surrealist prose. The composer conducts Ensemble Intercontemporain with Hilary Summers as the vocal soloist. CD 4 is devoted to the 70-minute Pli selon pli (1989 definitive version), Boulez’s Mallarmé-inspired masterpiece; its five movements first gathered together in 1960. From this work are the three ‘Improvisation sur Mallarmé’ that are sometimes played separately. From an arresting opening, the music’s pregnancy and sensuousness builds to irresistible iridescence – fragments, interjections, stillness and activity intertwining, not a note misplaced or seeming superfluous. The close of ‘Don (du poème)’ – Gift (of a Poem) – sets the stage to be picked up again in ‘Tombeau’ (Tomb), the finale, for the three ‘Improvisations sur Mallarmé’ each set a Mallarmé poem, Be it a swan trapped in ice, the colour white, or birth and death, Boulez matches the text with music of rapture, drama and variegation, whether cool and ravishing, beguiling or brittle, agitated and desolate, these three ‘Improvisations’ (ranging from five to twenty minutes in length) demand a soprano of very particular skills and empathy. Christine Schäfer is vocally fearless, every intimacy and exclamation perfectly judged.

Opening the fifth disc are the two parts of Piano Sonata No.3 (‘Trope’ / ‘Constellation-Miroir’), the only sections of a longer work that Boulez has allowed to be performed for all that it goes back to 1957. What we have is given fluid focus by Paavali Jumppanen is an incisive and dramatic reading. Structures, Livre II (1956/61) features Aimard and Florent Boffard in a quite recessed acoustic, the pianos widely spaced left and right for this antagonistic music. Boulez’s keen ear for detail and lucidity has never stopped him addressing a large symphony orchestra while always retaining his concern for clarity. We know his mastery as a conductor (holding posts with the BBC Symphony Orchestra and New York Philharmonic, and regular engagements over many decades with the Berlin and Vienna Philharmonics, the LSO and the orchestras of Chicago and Cleveland). Figures, Doubles, Prismes (1958/68) is often thrilling and exquisite, played here by the BBC Symphony Orchestra conducted by the composer on an Erato recording from 1980.

To open disc six are the explosions of Eclat-Multiples, for instrumental ensemble, music that glitters and contains many rhythmic intricacies. Then Alain Damiens’s predatory clarinet is heard – swooping, rasping, screaming, seducing – in Domaines, immediately followed by the expanded double-the-length (30 minutes) version of the same name, for clarinet (Michel Portal this time) now with instrumental groups. As an energetically enigmatic envoi to this CD is the two-minute Improvisé – pour le Dr Kalmus (the music publisher), for flute, clarinet, piano, viola and cello: compelling, whirling and swirling, a touching 80th-birthday present. On disc 7 is cummings ist der dichter (not the title Boulez intended!), an electrifying setting of the lower-case poet. Then Livre pour cordes (from 1968 if “still evolving”), an ecstatic and ravishing piece, the strings of the Vienna Philharmonic attending to every detail for the composer (in 1992). This is followed by Rituel in memoriam Bruno Maderna, a time-obsessed, spatial masterpiece of increasing complexity, composed by Boulez for his friend and fellow composer/conductor who died in 1973. Boulez’s BBCSO version for Sony Classical is chosen. Messagesquisse for solo cello and a group of six cellos is tantalising. Then comes the extravagant large orchestra of five of the Notations, the first four and VII, beautiful, thrilling and wonderful music, Boulez conducting Ensemble Modern Orchestra, after which comes the contrasted coolness of Memoriale (…explosante fixe… Originel) for solo flute and ensemble. This 80-minute disc is quite something.

Disc 8 includes the activity of <<...explosante-fixe...>> itself, quite remarkable, and then the 9-minute Anthèmes for solo violin (Jeanne-Marie Conquer) is heard extended, and enveloped in IRCAM-generated sounds, as Anthèmes II, this time with Hae-Sun Kang as the violinist. CD 9 includes Répons (1984) – pulsating, colourful and totally engaging – with a sonic shock when the electronics kick in to enlarge the instruments’ dimensions and capability. Currently standing at 45 minutes, were Boulez to carry out his desired extending, then Répons could last double that length. Further electronics follow with Dialogue de l’ombre double, a fascinating dialogue between a solo clarinettist (Damiens) and his recorded double. CD 10 contains the two pieces entitled Dérive; the first short, six minutes, the second (dedicated to Elliott Carter on his 100th-birthday) much longer at 44. Both exude compositional mastery and engage the listener from beginning to end. Dérive 2 is scored for string trio, piano, harp, two percussionists (one occupied by a xylophone and the other by a marimba), clarinet, horn, cor anglais and bassoon. The music’s sheer energy and incident is exhilarating in itself. Playing continuously one might hear Dérive 2 as being in three sections (of roughly 20, 15 and 10 minutes respectively), the middle one being a ‘slow movement’ of alluring fantasy-like reflection. The energetic ‘first movement’ is sustained over many stimulating pages, and the ‘finale’, when reached, is something of an accelerating recapitulation to the full-circle culmination, a return to the horn’s ‘A’ (now augmented) that launches the piece, to close a journey of considerable thrall. CD11 includes the coruscating piano solo, Incises (played brilliantly by Dimitri Vassilakis in its “version définitive 2001”, at nearly eleven minutes longer than hitherto). Incises is followed logically, and with a musical tie, by the 37-minute sur incises (for three pianos, three harps, and three percussionists), an active and gleaming score, its ideas lucid, their development a rollercoaster of endeavour. Une page d’éphéméride is a five-minute study for piano in which much happens – declamation, pedal effects, fierce gestures and explosive passages; Hidéki Nagano gives an winning account.

CD12 is of “historical recordings”. Le Marteau sans maître is now heard in an April 1964 Paris recording that is six minutes quicker, 32 to 38, than the later more lived-in Boulez-conducted version. With contralto Jeanne Deroubaix, the earlier taping has a pioneering fervour that is tangible. The ensemble includes guitarist Anton Stingl, and Severino Gazzelloni is the marvellous flautist; and it is he who in 1956 had recorded the Sonatina for Flute and Piano, with David Tudor, who had given the premiere (silently of course) of John Cage’s Four thirty-three. Also on this disc is the second version of Le Soleil des eaux, as premiered in Paris on 18 July 1950 conducted by Roger Désormière. Three solo singers and no choir in this scoring were to become soprano and chorus for the fourth version (as on disc 3).

The French/English booklet is exemplary. There is a recent (October 2011) interview with Boulez printed within its pages – the aural equivalent, in French, is the hour-long thirteenth compact disc; Boulez’s works are listed in alphabetical order together with where to find an introductory note to them in the annotation and on which CD to listen; there is a bibliography of Boulez’s own authoring and a selection of titles by others who have written about him; a time-line (“Points of Reference”) from his birth to 2011; and texts and translations for all the vocal works. It’s been compelling, illuminating and a privilege to work through the contents of this set, issued not for any anniversary but for reasons of sheer quality.