A film by Bruno Monsaingeon

Bruno Monsaingeon’s films, most famously perhaps on Glenn Gould and Sviatoslav Richter, never fail to stimulate. They are beautifully made and always sensitive to the subject – subjects that quite often contain a certain amount of eccentricity or, more simply, a will to follow their own paths no matter what (Piotr Anderszewski falls into the latter classification).

Monsaingeon’s film (presumably made in 2008, his booklet note is dated March 2009) takes the form of a train journey – a journey that is symbolic as well as real. No ordinary train journey, this: it marks a winter journey (itself a term laden with meaning – a “Winterreise”) across Poland to Budapest. We also see Anderszewski in Germany, London, Paris and finally Lisbon.

There are no interviews, the commentary being given by Anderszewski. After a visual introduction to the train, we hear Anderszewski in Bach (Partita in B flat – Bach recurs later, in the Théâtre des Champs-Elysées, the Partita in C minor, when he encores the entire work because he was not happy with it the first time; and finally, he muses on challenges of the Well-Tempered Clavier); then we see a piano being installed in the train that will take him to a variety of venues – but the point is, he is always on the move.

He discusses paradoxes in Mozart, ambiguities of “Die Zauberflöte”. He is full of surprises – he compares Chopin’s Barcarolle to a “plate of macaroni” as he plays. He delights in paradox in the Barcarolle, too: “This is noble … and frivolous. Nothing is more beautiful in Chopin than frivolity; nothing is more profound than frivolity”. But the Fourth Ballade is not frivolous – instead, it is “magnificent” and “sinister” (incidentally, he discusses this in French). 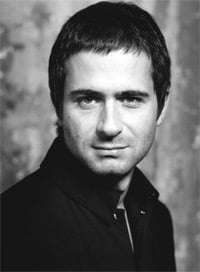 The first place of arrival we see is Poznań (Poland) and briefly hear some Chopin in live performance; this is juxtaposed with Anderszewski discussing his love of a passage from Chopin’s F minor Piano Concerto (which leads to his love for Poland itself). He finds it “disgraceful” that Warsaw’s airport is named after the composer – Chopin is too delicate for this…

And then on to Anderszewski’s childhood, which includes black-and-white footage. At 16, he stopped “aspiring to a certain form of pianism”, and so began his individual journey. Suddenly, we are plunged into Schumann’s Humoresque, a brief insert before the story continues. Is Anderszewski lazy (he mentions this several times)? He loves music but early on he hated practising. It was a performance of Mozart’s “Requiem” that changed his way of thinking about the piano.

An early passion was Beethoven, and we see him playing and directing (in a recording session) Beethoven’s First Concerto with Deutsche Kammerphilharmonie Bremen. His gestures are certainly enthusiastic. He speaks over the rehearsal in a commentary about the frustrations involved in the recording process – “if I did this better, why can’t I do it better still?” – and the rewards (“the more you master something, the freer you are”). “Recording is a desperate attempt to approach perfection”, he says.

Monsaingeon thinks nothing of sharp juxtapositions – suddenly, after a recording session, we eavesdrop on Anderszewski playing parts of “Die Zauberflöte” to himself (and enthusiastically singing along, too) before he is shown entertaining and talking about the first pieces which influenced him (Eine kleine Nachtmusik and Beethoven’s Violin Concerto).

We see him also in rehearsal with Gustavo Dudamel and the Philharmonia Orchestra: “The problem with Brahms is that you feel he is already the interpreter himself, of Bach, of Beethoven”. From London to Budapest (Anderszewski disembarks off a train with other people on it this time) – the excerpt here is more Schumann. In Budapest he meets with his grandmother (with whom he spent some of his childhood). And from grandmother to his violinist-sister (Dorota Anderszewska), and their bond, and to Szymanowski (“a genius … his music saved me from asphyxiation”).

Suddenly we hear Anderszewski’s thoughts on the annihilation of Warsaw and we experience his clear love for the place. The juxtaposition of this with the decadence of Paris is stark indeed. Finally, Lisbon, where he has settled and a place for which he evidently holds huge affection. “Lisbon makes me more serene”, he says – there is “an absence of tragedy”.

This touching and stimulating portrait of a pianist on a quest is highly recommended.