Anne Schwanewilms has for some ten years been creeping slowly up the ranks of international sopranos in the German late-Romantic, lyric Wagner and Richard Strauss repertoire. The pace of her progress has been judicious and the planning of her advance prudent, so that her instrument has not been damaged by excessive demands being placed on it too soon. Indeed she has responded to a perceived lightening of the voice by dropping more abrasive roles in favour of vulnerable heroines or more dominant ones in smaller houses.Graduation to the Feldmarschallin came in 2005, followed by a move into Lieder. It is not at all surprising to learn that her steps in this direction are measured: a single programme, meticulously prepared, with a second following at a respectful distance. So far, recordings have been few but it is a deserved compliment to be chosen by Hyperion as the second singer for its Richard Strauss series.

Hyperion has a fine track record in the comprehensive exploration of leading composers of the Kunstlied. Ground-breaking Schubert and Schumann sets have been universally praised. In those the choice of singers for each volume was adventurous, often catching emerging talent at the point where vocal freshness is united with the discovery and exploration of new repertoire.

The songs of Strauss represent a new and exciting area for this process: the composer’s biographer Norman Del Mar lists 213, including juvenilia. Volume One of the series (CDA67488) featured the dramatic soprano Christine Brewer, another late developer now in her vocal and interpretative prime. The choice of content was also established: a chronological ordering was followed but the groups in which the songs were published were not observed, reasonably enough, as those groups often embody major fluctuations of poetic theme and musical style, as well as settings of different writers. Roger Vignoles is here the unifying force of the project as accompanist and literary authority.

What would one not give to have recordings of Pauline Strauss, who performed many of these songs with her husband until her retirement in 1904? He considered her to have the ideal voice for his songs. All we know about her as a performer is that she was a lyric soprano whom Strauss met when she was under contract at Weimar, where her roles included Pamina, Elsa and Elisabeth; the latter she also sang at Bayreuth. He so often built in a soaring radiance into his soprano parts that it seems reasonable to deduce that her voice had that quality, represented best in the sopranos of the last thirty years by Gundula Janowitz and Margaret Price. Anne Schwanewilms, who has already made a name for herself in “Four Last Songs”, belongs to that dynasty.

The disc opens with two songs from the Opus 10 set, to words by Hermann von Gilm zu Rosenegg. “Die Nacht” receives a beautiful performance, with both musicians suitably tentative in launching the piece and never letting the temperature rise too far. One mannerism of the soprano soon becomes apparent: she attacks high notes with a pure, repressed tone, which she then expands with a crescendo, ravishing in itself but not authentic. It is also conspicuous in another well-known song, “Ruhe, meine Seele”, the only one of the Opus 27 group which were composed as a wedding present to Pauline to be included here. 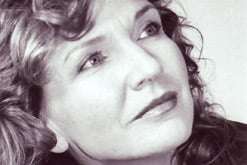 The other Opus 10 song, “Geduld”, is underrated. The lilting 6/8 accompaniment seems initially harmless but the text soon speaks of falling leaves, funerals and graveyards (a passage where Schwanewilms’s mezzo origins benefit her greatly) and the final verse tightens the intensity, powering forward on a massive stringendo and crescendo, with the soprano this time showing no inhibitions in firing off several fearless top Gs.

There are times when a consistently high tessitura leads to some signs of discomfort, with a hardening in the tone, even a hint of a beat (“Blauer Sommer”, Opus 31/Number 1 and “In goldener Fulle”, Opus 49/Number 2) but generally this is a sound in which one can safely luxuriate: ethereal yet substantial.

Though Strauss composed songs from childhood to old age, the years in which he was pre-occupied with the major operas saw a diminution in his activities in the field of Lieder. The promise of an operatic career to come is apparent in the theatrical style of a song as early as “O wärst du mein”, Opus 26/Number 2. This contains the equivalent of accompanied recitative, with vocal declamation, powerful stabs at emphatic notes and pseudo-orchestral gestures from the piano. Schwanewilms has plenty of voice for it, while she also masters the intimacy needed in some of the other songs. As far as long-breathed phrasing is concerned, “Waldseligkeit” rivals Schubert’s “Nacht und Träume” as a test and Schwanewilms shows no weakness there. She can also sparkle with light-hearted joy, as she does in “Schlagende Herzen”, a song that begins as a simple folksy ballad but also offers rewards to the pianist. In some songs Vignoles is an accompanist pure and simple. In “Ruhe, meine Seele”, for example, he is faced by little more than block chords (much elaborated in the orchestral version). In “Schlagende Herzen”, however, he shares the limelight through a varied contrapuntal piano part, including trills, and often takes the lead in anticipating the singer’s cries of “kling klang”. The recorded balance is ideal throughout, mirroring the equal partnership between these artists.

Strauss prior to “Der Rosenkavalier” was an equivocal musician, with one foot in the late-Romantic movement and the other in the twentieth-century. There are songs in this collection which are harmonically radical: “O wärst du mein!” is one such and Strauss uses a similarly uncompromising harmonic vocabulary in the rarely-heard “Blindenklage”, Opus 56/Number 2 to convey his blind subject’s despair.

Such language is dictated by the text in the three Ophelia songs of Opus 67, written to settle a legal dispute with his publisher. His setting of these nonsense verses uses an inventive idiom to reflect the madness of the character. This produces a convincing effect of incoherence in the first song and chaos in the second, while the third is theoretically in G flat minor, though three-quarters of the singer’s notes have an accidental attached. Schwanewilms maintains absolute purity of intonation in this challenging set.

Strauss’s most popular songs will, nevertheless, always be those which prefer a conservative mode; they are well represented here and performed without a hint of condescension. “Traum durch die Dämmerung” projects the languorous, perfumed warmth of a summer dusk. There is a short access of excitement that creates the climax for the song before it subsides again into its lush mood. “Das Rosenband” is unashamedly diatonic, its line soaked in warmth and tenderness. This is one of the few texts by a great poet (Klopstock) that Strauss set, and his setting equals the quality of the words.

A highly rewarding recital, then, which will certainly enhance the reputation of this soprano and ought to broaden the repertoire of Strauss’s songs which are heard in the recital-room.