One of the mysteries of 19th-century musical culture is the fading of Ludwig (Louis) Spohr’s huge reputation. Spohr (1784-1859), loved by the public and famous as teacher, composer and conductor (notable in particular for being one of the earliest to direct an orchestra using a baton), his appeal seems still to have been appreciated two decades after his death as evidenced by W. S. Gilbert’s lines in “The Mikado” (first performed in 1878) when he writes: “…Bach interwoven, with Spohr and Beethoven, at Classical Monday Pops”.

Sadly it seems that Spohr’s reputation began to dissolve as the early 20th-century unfolded. What caused such a change in musical taste is difficult to define. To be hypercritical, Spohr is capable of writing banal melodies – for example there are some duos for violins that suffer from seriously uninspired melodic invention, hindered further by an element of sickly sweetness, but turning to the Nonet – one of the few works to retain its popularity and perhaps today the most often played work of the composer’s entire output – only the theme of the finale as much as hints at indulgent romanticism. Overall the Nonet is a beautifully contrived piece of chamber music, elegant and charming and showing skilled exposure of the timbres of every instrument. The scoring is of a classical orchestra in miniature: one of each stringed instrument, one of each woodwind and a horn.

This performance is interestingly expressive – in the olden days critics used to refer to a parlandostyle. That is to say the instrumentalist holding the melody shapes it expressively as if it were a dissertation in speech. This is evident from the very outset and when the music becomes more tense the players are not afraid to slightly to push the tempo forward for dramatic purposes. 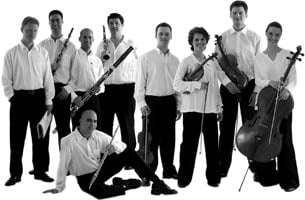 The Septet gives a different impression. It was composed forty years later, in 1853, and it does not seem to show any great development beyond the admirable skills of the Nonet written just before the composer reached 30. Where the Nonet might be said to be ahead of its time with its occasional suggestions of Mendelssohn (who was a mere toddler at the date of its composition) the Septet, scherzo apart, is more a sequence of chamber-music tone poems than a Sonata-based Classical composition. The use of an elaborate piano part contributes to this impression. No longer can instrumental timbres be distinguished. The music is often delightful but the piano knits the textures tightly together and there is less contrast of instrumental colour.

None of this is the fault of the excellent players of Ensemble 360 for it seems that Spohr is aiming for a different artistic effect. I enjoyed the tunes, the often-succinct use of harmony and the general feeling of warm optimism but somehow the work comes over as no more an admirable salon piece.

The moderately resonant acoustic is ideal for the style of the music, the recording is well balanced and the stereo location of the instruments is extremely clear. To some extent this is a disadvantage for which the recording engineer is in no way to blame. The trouble is that not only do the strings seem to be distributed from left to middle but the winds are spread from middle to right. More worrying still, the woodwind’s positional layout reverses the normal distribution with flute hard right and the group spreading across to the central bassoon and the slightly left-of-centre horn. I find this reversal of normal wind layout together with the general placing of strings to the left and the winds to the right very disturbing and a hindrance to easy listening. I like the recorded sound but its admirable accuracy makes the eccentric layout very obvious.

This though is without doubt impressive music-making and despite my musical reservations about the Septet, I find it encouraging to have Spohr being paid some attention again.