Also included, as a bonus disc, is a conversation, recorded in January 2007, between Vladimir Ashkenazy and Christopher Nupen – Ashkenazy “talking about his career and music”

Vladimir Ashkenazy turned 70 on 6 July 2007. He is an enthusiast, seemingly tireless and personally charming. ‘Honest’ is the word that perhaps best sums him up – both as a musician and a man – and life and music for him are indivisible. Yet he wears his philosophies and analyses lightly – a conversation with him is both direct and friendly, and as a musician his humility never deflects from the greatness of the score. He hopes the selection of music in this box “represents a good enough spectrum of wonderful music which I have tried to bring to life to the best of my abilities.”

This handsome box, the choices made by Ashkenazy (from his huge discography) covers his work both as a pianist and composer. The selection begins with the Bach recorded in 1965); a crisp and vital account that looks into the music’s recesses, too, and, in the slow movement, relays solemn beauty. Then to 2005 for a Bach Prelude and Fugue, from Ashkenazy’s complete set of the ‘48’, which leaves no doubt as to the pianist’s awe andAshkenazy has chosen his 1982 digital recording of Gaspard de la nuit (his 1965 Decca version is now on 475 8499, in “The Originals” series, which preserves the SXL LP’s mix of Chopin, Debussy and Ravel). The re-make is a little short on atmosphere (let alone melodrama) at times, but ‘Scarbo’ is played with incision and dramatic contrasts and is followed by the first of his four recordings of Rachmaninov’s Third Concerto (there followed versions with Previn, Ormandy and Haitink); in this March 1963 account with Anatole Fistoulari there is gentle rather than barnstorming expression, a delight in a quicksilver run and a clarity of means that (convincingly) cuts away the tag that Rachmaninov wrote fine music for ‘weepie’ films. There’s no lack of innigkeit though (or whatever the Russian equivalent is), a similar stratagem used for Prokofiev Number 2, again with the LSO, this time with Previn conducting, the extravagance of the music absorbed into a flowing and spectral whole. 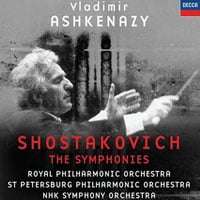 In his conducting of Shostakovich 5, Ashkenazy leads an apolitical account and gives his full support the composer: that he has written a symphony first and a cipher second (although the problematical final bars are certainly deadpan enough): this particularly punctilious and concentrated reading, tangibly recorded, seems to need an audience to take it to that final level. (This performance is included in Ashkenazy’s complete recording of all 15 Shostakovich symphonies – shared between the Royal Philharmonic, St Petersburg Philharmonic and NHK Symphony (the latter ensemble involved in a second Ashkenazy recording of Symphony No.4 – 475 8748, 12 CDs).

‘Live-ness’ comes to the fore in the Boston Symphony Sibelius 2, that extra spark, in a wholesome performance devoid of histrionics but well observed detail; that Ashkenazy, in his introduction to this set, recalls being introduced to this work through Anthony Collins’s recording of it will tell collectors of a shared directness of vision between the conductors. Scriabin follows Sibelius – not the best arrangement given the symphony’s triumphant close – first with the Piano Concerto (with its ravishing slow movement, beautifully turned here with Lorin Maazel conducting) and the harmonically adventurous Piano Sonata No.4 (Scriabin now developing a very personal, mystical musical language that Ashkenazy promulgates with sympathetic understanding.

We are not done. An eighth, bonus, CD documents a 79-minute interview, Ashkenazy in conversation with Christopher Nupen. It is divided into 40 tracks.

Ashkenazy – commitment and conviction, not to be beaten, but not swamping the music in hype. The music is the victor.Decca’s re-mastering is excellent, and while the sound of some of the pianos seems a bit wiry, and the perspectives can be a little distant, even monophonic in some of the solo items, the common thread is of course Ashkenazy’s commitment, honesty and partnership with the music.