This recital was not available to review on the afternoon of 12 May 2009, it being a concert solely for Friends of Wigmore Hall. However, such exclusivity did not prevent less than complimentary comments circulating afterwards about the performances. Of course, all a reviewer can do is report on what is offered for sale rather than speculate about how the final result was achieved, for Jonathan Biss’s playing is technically impressive, yet the impression given is more ‘studio’ than ‘live’ (save for applause), for the majority of the non-musical ‘noise’ is Biss’s quite audible if performance-involved breathing.

Biss gives the ‘Reliquie’ in the two movements that Schubert finished. (It is possible to play the third movement and finale in their incomplete states, as Sviatoslav Richter did in a recital in 1979, a recording of which was first issued on a Philips LP, 416 292-1, and Martino Tirimo has completed and recorded them.) Biss is rather quick in the opening movement (marked Moderato but here attempting to be an allegro). If Richter was (typically) controversially spacious (taking nearly 23 minutes to Biss’s 15, with both observing the exposition repeat), Biss’s failure is that he seems relentless (which, as he reveals in an interview in the booklet, he was hoping to avoid) and is also somewhat hard-toned in the loudest passages (indeed some of his fortissimo staccatos are ugly). 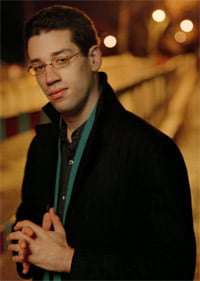 Greater variegation is needed, and although Biss is admirably unmannered in his traversal, his playing of Schubert – at present – lacks the identification and insight of, say, Alfred Brendel, Imogen Cooper, Grigory Sokolov and Wilhelm Kempff, let alone the sheer individuality (like it or not) of Richter.

There is similar haste (little pause for breath) at times in the great A major Sonata; clear-sighted as Biss may be, this is music that lives on the edge, but not here. It comes across as rather ordinary; outbursts, particularly in the second movement, are imposed and aggressive rather than emotionally surging from within. Come the scherzo, some deft and articulate fingering raises the stakes, the trio nicely flexible (and even asking questions), while the finale is well paced and shapely. Yet there is little beneath the well-groomed notes, as there can be with the previously named pianists and, in this particular sonata, Stephen Kovacevich. There is though something compelling about the outer movements’ developments and their aftermath, to the extent that the first-movement exposition repeat seems somewhat superfluous.

The recorded sound is first-class, faithfully capturing the pianist’s expression, one that reminds of Rudolf Serkin’s unvarnished approach (if without his interpretative penetration). Framing the Schubert is a miniature from György Kurtág’s ‘Games’. It would be nice to know who Judit is (it’s not his wife, for she is called Márta), but no such identification comes from the booklet note. For someone who seems not overly concerned with colour in the Classical repertoire, Biss appreciates that every note and its specific timbre is crucial in revealing Kurtág’s fastidious pieces, and makes both of them particularly convincing, not least through his considered weighting and assortment of touch and intensity.