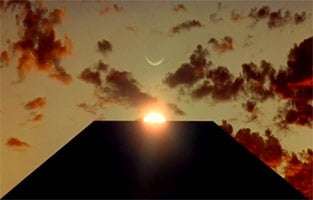 Seeing “2001: A Space Odyssey” for the first time in 1968 was an eye-opening experience. In London it played at the Casino Cinema in Old Compton Street, Soho (now the Prince Edward Theatre), which from the early 1950s was the London home for Cinerama productions (the triple split-screen presentations using three synchronised projectors on a wrap-around screen). The joins in the three screens were visible and the colours did not always match, leading to an unsatisfactory experience. The film went on general release but seeing it in an average high-street cinema led to a scaling down by Kubrick of his philosophy of film-making. The Royal Festival Hall’s screen is just about big enough to appreciate Kubrick’s vision; this film is nothing if not a visual and aural treat. The live music performance certainly added a completely new and stunning dimension to viewing of the film. Kubrick’s intention was that “2001” should be more of an operatic rather than a cinematic experience.

“2001” is perhaps Kubrick’s masterpiece, but also one of world cinema’s finest films, although some find it totally boring and pretentious. The two screenings of “2001” on 7 & 8 April were a repeat of last year’s presentation by André de Ridder and the Philharmonia Orchestra. In reviewing it then Classical Source’s reviewer questioned “why it was thought necessary to remove the music from the soundtrack – music and recordings specifically chosen by Kubrick – to be replaced by exactly the same scores (as adapted by Kubrick) played live.” In the event it was musically a complete success, the Philharmonia sounding pin-point clear with a mixture of humorous surprise and total ethereality with perfectly modulated interpretations of the music that includes ‘Adagio’ from Khachaturian’s Gayaneh; Ligeti’s Lux aeterna, Requiem and, in its entirety, Atmosphères; The Blue Danube waltz by Johann Strauss II; and the opening of Richard Strauss’s Also sprach Zarathustra – Karajan’s version with the Vienna Philharmonic was used in the film, but not credited (Decca did not want it cheapened by association), but upon the film’s success Decca released a new printing “as heard in 2001”, but MGM, in its soundtrack LP, used Karl Böhm’s DG version with the Berlin Philharmonic. Although a score was commissioned from Alex North (who had worked with Kubrick on “Spartacus” and “Dr Strangelove”) during post-production Kubrick changed his mind and decided to use music already composed (in the case of Atmosphères, without Ligeti’s permission and to his annoyance!). 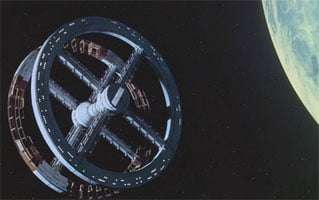 “2001: A Space Odyssey” is in four sections. ‘The Dawn of Man’ shows prehistoric apes learning to be violent, picking up bones and using them as weapons. A huge monolith appears while they are fighting off a marauding tribe of apes. The next day they reclaim their territory. As the leader of the apes throws a bone in the air, the film cuts immediately to outer space many thousands of years later, to an orbiting space weapon. TMA-1 (Tycho Magnetic Anomaly One) has Dr Floyd en route to investigate a strange epidemic at a US Moon-base where an ancient artefact has been discovered – a monolith similar to that found by the prehistoric apes – emitting high-frequency radio signals towards Jupiter. Next, ‘Jupiter Mission’ sees two astronauts and other scientists on an American spaceship preparing their mission to the planet Jupiter. Events take an astonishing turn when HAL 9000, the on-board computer, appears to be taking control of both the spaceship and the astronauts’ lives. When it reports a fault, one of the astronauts goes on a spacewalk to de-activate the faulty unit, but the computer severs Poole’s oxygen supply and the astronaut disappears into outer space. Poole’s colleague, Bowman, is then forced to shut down the computer, much to the obvious, and humanly distress of HAL. Finally, ‘Jupiter and Beyond the Infinite’ finds Bowman leaving the space module only to discover another monolith which engulfs the astronaut who is then taken on a journey through time and space. He eventually finds himself looking at his own body at various aging stages of his life until finally he is shown as a new foetus enclosed within an orb of light looking down at Planet Earth. 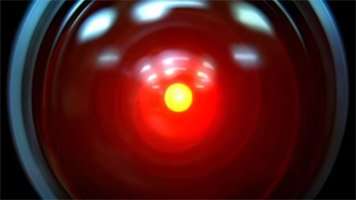 This re-mastered print looks superb, and the ‘special effects’ especially so, given that it was created well before computer-generated imagery and gimmickry. It is still surprising to watch the cast walking weightless and upside-down in space with those odd and slanted perspectives. Kubrick faked nothing (like in recent films such as “Titanic” or “Avatar”), his effects created by the camera. The music remains a major part of the film, despite much silence, and makes an essential contribution and, as played live, gives the movie an extra layer of appreciation. Poetry of motion is at play as the spaceship glides during The Blue Danube: space-travel made to seem so attractive. Unsettling is the voice of HAL 9000 (HAL consists of the letters before IBM) supplied by Douglas Rain in smooth, friendly and obsequious tones but ultimately ‘he’ is a dangerous operator who can both hear and lip-read his masters’ voices, and, subsequently, with a mind of his own, he can act on his own will – a frightening prospect.

“2001” remains a masterpiece. It might be a salutary experience to have Kubrick’s visionary movie played in this way at least once a year, if only to remind of what a great filmmaker he was (although it remained unfinished because the budget ran out). In that case the original running time could be restored by including the twenty-minute introduction, a discussion between various parties on space travel that was originally filmed but cut for the film’s general release. Some references to it are included in the extras on the Warner Bros DVD, read by the film’s leading actor Keir Dullea.