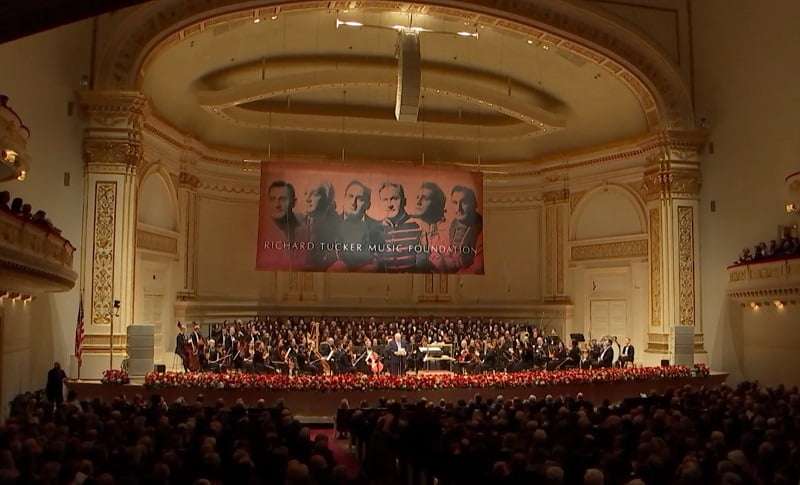 The forty-three-year-old Richard Tucker Music Foundation, which perpetuates the legacy of the beloved American tenor (his 10 January 1975 funeral, held at the Met, was attended by more than 3,000 mourners) always promises a line-up of stars for its annual concert. The evening started with an audio clip of Tucker singing ‘Cielo e mar’ from Ponchielli’s La Gioconda.

The first live music came from Christian Van Horn, an arresting version of ‘Oh chi piange … Nel futuro buio discerno’ from Verdi’s Nabucco. As impressive as his singing was, it was even more so in his second Verdi offering, a deeply moving rendering of ‘Ella giammai m’amò’ from Don Carlo. Later on, he joined Quinn Kelsey for ‘Riccardo! Riccardo! …S uoni la tromba’, a tense dialogue from Bellini’s I puritani, matching each other phrase for phrase and displaying dignified camaraderie. In Kelsey’s single aria, ‘È sogno? O realtá?’, Ford’s monologue from Verdi’s Falstaff, he traversed the vocally difficult moments with great drama and ease, successfully conveying the character’s fear, anger and jealousy.

This was a program stacked with Verdi, but Nadine Sierra offered some lighter fare: a highly physical, bravura performance of ‘Me llaman la primorosa’ from the zarzuela El Barbero de Sevilla by Giménez and Nieto, and she teamed up with Michael Fabiano for a steamy rendition of the dramatic duet, Toi! Vous! … N’est-ce plus ma main?’ (Massenet’s) Manon. Although Fabiano’s colossal sound somewhat overpowered Sierra’s light soprano, her seductive voice and moves were highly effective. The duet ended in a passionate kiss.

It was a great time for Fabiano, including a riveting reading of Rodolfo’s ravishing ‘Quando le sera al placido’ (Verdi’s Luisa Miller), putting his ardent voice on glorious display. Javier Camarena and Yusif Eyvazov were the other tenors. Camarena sang from Garcia’s Florestan, and teamed up with Angela Meade for an excerpt from Rossini’s Armida, but did not perform from Zingarelli’s Giulietta et Romeo, instead further Florestan, ‘Dieu! … Pour venger un père, faut-il devenir assassin?’. The recitative set the tone for his beautiful, heartfelt performance, full of anger and pain and ending in some spectacularly executed high notes. Meade appeared again, she was thrillingly triumphant in ‘O Madre, dal cielo … No, no! giusta causa’ (Verdi’s I Lombardi).

Eyvazov was very impassioned in two arias from Il trovatore. He brought a lovely sense of longing to the gentle ‘Ah si ben mio’, and delivered an appropriately vigorous rendition of the more flamboyant ‘Di quella pira’. Eyvazov also sang with his wife, Anna Netrebko, in ‘Vicino a te s’aqueta’ from Giordano’s Andrea Chénier.

Christine Goerke performed ‘Es gibt ein Reich’ from Richard Strauss’s Ariadne auf Naxos, the only German selection, beautifully, but failed to engage, also true of ‘Regina coeli … Inneggiamo’ from Cavalleria rusticana, where she was sometimes overwhelmed by the chorus. A standout was Stephanie Blythe, paying homage to Leonard Bernstein, a powerful and moving rendition of ‘Take Care of this House’ from 1600 Pennsylvania Avenue, striking a tearfully nostalgic note, and a show-stopping rendition of Carmen’s ‘Habanera’.

This was a wonderful evening of music, the orchestra and chorus in top form, Marco Armiliato leading colorful contributions.