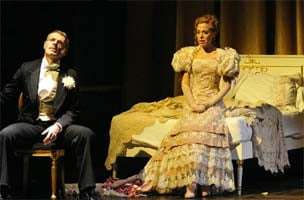 Stephen Sondheim’s “A Little Night Music” has a distinguished performance history both as a piece of music theatre and as an example of operetta, and falls somewhere between the two genres. With its sophisticated storyline revolving around the complexity of the development and deconstruction of love-triangles and the passing of time for the individual protagonists it is set to a predominant three-beat form. Distinct parallels can be drawn between this work and Richard Strauss’s “Der Rosenkavalier”. Based on Ingmar Bergman’s “Smiles of a Summer Night” which itself was inspired by Shakespeare’s “A Midsummer Night’s Dream”, Sondheim and Hugh Wheeler’s masterpiece can be viewed as a significant work in the development of the Broadway musical for Sondheim daringly crosses and blurs the boundaries between established art forms.

It is therefore not surprising that “A Little Night Music” has featured in the schedules of both theatre and opera companies. The work received its Broadway premiere in February 1973 and swept the boards in the musical-theatre category at both Tony and Drama Desk awards that year. The production subsequently transferred to London’s West End for its British premiere in 1976. With the exception of an embarrassingly unsuccessful film in 1978 starring Elizabeth Taylor in the lead role, “A Little Night Music” remained largely forgotten.

It was not until 1989 that Sondheim’s elegant and stylish masterpiece re-entered the repertory when it was revived in Ian Judge’s painfully haunting production for the Chichester Festival. In 1990 the New York City Opera recognised the work’s potential, initiating a handful of productions in America throughout the next decade including at Houston Grand Opera in 1999 with a cast including Thomas Allen, Frederica von Stade and Evelyn Lear; and at time of writing the first Broadway revival is packing audiences in at New York’s Walter Kerr Theatre. 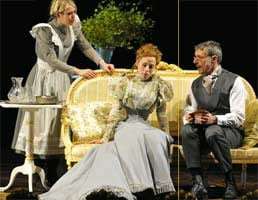 Théâtre du Châtelet has included the French premiere in its 2009/10 season, director Lee Blakeley assembling a predominantly British cast, combining the talents of established operatic performers and notable figures from the world of theatre. Working closely with Rae Smith (sets) and Jo van Schuppen (costumes), Blakely manages to create a stunningly elegant vision of early-twentieth-century Sweden with costumes of sumptuous fabrics. Drapes are used to cover set-changes; and at the close of Act One, when the action moves from the dark and claustrophobic world of town-life to a Scandinavian Summer, the audience is provided with a coup de théâtre, the rear backdrop rises to reveal a Klimt-inspired mural of wild flowers, the stage bathed in glorious sunlight for the first time since the curtain has risen. Whilst previous revivals of this work have all had their individual strengths the Châtelet’s version may be the best incarnation so far. The only minor criticism might be addressed to the director in that he places certain significant scenes at the very periphery of the stage and to a restricted view to some.

Any initial disappointment at the withdrawal of Kristin Scott Thomas was more than compensated by the radiant presence of Greta Scacchi in the central role as Desiree: Sondheim’s equivalent of Strauss’s Marschallin. What a massively underrated and under-exposed actress this lady is, giving a performance that eclipses memories of Dame Judi Dench in the role at the National Theatre in 1995. Scacchi conveys not only the deep pathos and beauty of a fabled actress who has known better times but also endows the role with a warmth and humour not previously seen. Confronted by the sudden realisation that her dreams have been shattered and reflecting on the folly of her younger years, Scacchi’s heartbreaking rendition of ‘Send in the Clowns’ comes as close to perfection as it could get. 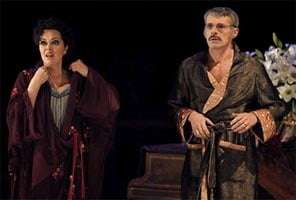 As Desiree’s strict and judgemental Mother, Madame Armfeldt (a role created by the incomparable Hermione Gingold), the Châtelet hit on a stroke of genius by engaging Leslie Caron. Now in her seventy-eighth year, Caron provides a hypnotic focus to the production as the grande-dame who rejects the love of her life in order to pursue a materialistic and hedonistic path. Making her first entrance as a sprightly bichette, Caron’s Madame Armfeldt tugs at the heartstrings when, looking back to the wheelchair that awaits her, she realises that her youth is past. She remains the relic of a bygone age whose elegance and grace have disappeared. Whilst struggling to cope with the complex melodic structure of her soliloquy ‘Liaisons’, in which she reminisces on the dalliances and affairs of her youth, Caron commands the stage and lures audience-members into Armfeldt’s dreamlike world ensnaring them as trophies in her web of the past.

Of the two rivals for Desiree’s affections, Lambert Wilson (the one native French member of the cast) cuts a witty and likeable figure as the lawyer Fredrik Egerman, and the young British baritone Nicholas Garrett is in excellent voice as the haughty, jealous dragoon Count Carl-Magnus Malcolm. Similarly the secondary female roles of Anne Egerman (Fredrik’s child-bride) and Countess Charlotte Malcolm are expertly filled by, respectively, Rebecca Bottone and Deanne Meek. Also of note are strong performances from David Curry as Henrik and Francesca Jackson as Petra.

In any performance of “A Little Night Music”, Sondheim’s omniscient chorus of the Liebeslieder is a key element: never far from the heart of the action, observing and commenting on the dalliances of the lovers and delivering some of Sondheim’s most acidic and astute lyrics, here given with spot-on diction and Jonathan Stockhammer’s skilful conducting brought-out subtleties in the orchestration.