A Man of No Importance
Music by Stephen Flaherty, lyrics by Lynn Ahrens, book by Terrence McNally, based on Barry Devlin’s 1994 screenplay of the same name 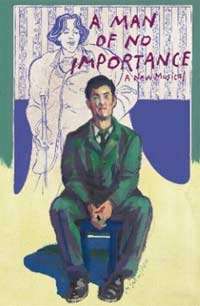 These days mainstream commercial theatre can ill-afford flops, although they still occur. There’s really no place for experiment in London’s West End – that is left to the National Theatre, the Royal Court, the Bush and the Tricycle, which are really mainstream extensions of the West End. Then there are the countless fringe-theatres on the perimeter: the Landor, the Finborough, the Menier and the Donmar Warehouse, the last right in the heart of Covent Garden. All have done well in staging original musicals and revivals, some of which have even transferred to the West End. To these excellent venues must be added the Union Theatre underneath the railway arches in Southwark.

Following its UK premiere of Michael John LaChiusa’s “First Lady Suite”, a chamber musical about US Presidents’ wives, the Union then staged a British first of “A Man of No Importance”, a musical version of Barry Devlin’s 1995 screenplay about Alfie Byrne, a closeted gay, Catholic, Dublin bus conductor, that starred Albert Finney. The musical version has music by Stephen Flaherty and lyrics by Lynn Ahrens whose most famous show written together and the only one to play the UK hitherto is “Ragtime”. The book is by Terrence McNally, whose musicals include “The Rink”, “Kiss of the Spider Woman” and “The Full Monty”. In adapting Barry Devlin’s screenplay he has kept it based in Dublin. The original film of “The Full Monty”, however, was set in Sheffield and it seemed to lose something when the American writers relocated it to Buffalo, New York. In fact the musical version of “A Man of No Importance” turns out to be better than its source material. 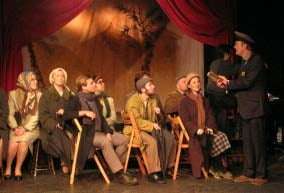 It dates from 2002 when “A Man of No Importance” was premiered at Lincoln Center in New York with Roger Rees and Faith Prince and, although not entirely successful, it won an Outer Critics’ Circle Award for Best Off-Broadway Musical. The cast album was released in 2003 and the show was further staged in Toronto in 2008 and revived in Nyack, New York State in November 2009 at the same time as the Union Theatre in London presented the European premiere. It was such a success that Sasha Regan, who runs the Union, has been able to transfer the production for its West End premiere at the Arts Theatre.

A programme note from the three creators of the show says: “We are proud and joyful that “A Man of No Importance” is transferring after its production at the Union Theatre. The story of Alfie and his beloved St Imelda Players is one that we, as American writers, identify with. The struggle to create ‘art’, the collision of our personal foibles with our dreams, the bedrock humanity of a life in the theatre (and Alfie’s commitment is no less urgent than his West End or Broadway compatriots) – they are all part of a story we wanted to tell again, this time with music.”

The story of Alfie Byrne and his efforts to stage a production of Oscar Wilde’s “Salome” by his local amateur dramatics company is an affecting one. The resulting public and church reaction to the “immodest dancing” of Princess Salome – the period setting is 1963 – and the way that Alfie realises his own nature and his true feelings about life, sex and art are dealt with quite compassionately in both the film and its musical spin-off. The musical certainly works on several levels. It not only improves on a not-quite-believable film-script but, turning it into a musical, an artificial art form, raises it to a more acceptable level of truth. There’s even a fantasy appearance by Oscar Wilde. 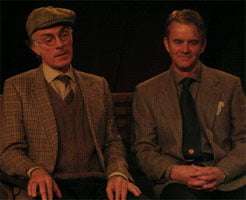 The whole thing is presented in flashback as Alfie learns that his production of “Salome” has been vetoed by the powers that be. So here we have a play within a play as Alfie goes through the motions of casting from a disparate and not very talented company of players. His Dublin housewives come up with novel ways of performing the ‘Dance of the Seven Veils’ in practical ways that involve zippers and Velcro ®. The sub-plot concerns Alfie’s secret yearning for his fellow bus-driver, Robbie, who Alfie refers to as Bosie, Oscar Wilde’s infamous companion. As it is 1963 he has to be discreet but yearns to have just a cuddle from another man. However, living a lonely life at home with his sister, innocent that he is, when he tries for a little human warmth, it only lands him in trouble.

The musical staging is, well, just grand, in Ben De Wynter’s spirited production, with some excellent Irish-inspired dancing from a talented cast of players. Paul Clarkson imbues Alfie with a poignant sadness in a reminder of just how closeted gay people led their lives over forty years ago. He is never camp, even though he is moderately outrageous in his reading of Oscar Wilde’s poetry and prose to his bus passengers every morning, all in the name of art. Patrick Kelliher is a handsome Robbie/Bosie who cannot share Alfie’s sexual interest but who likes his workmate anyway. Róisin Sullivan is Adele, a new girl on the bus who, despite protestations, gets roped in to play Salome. The supporting cast double up in some well-drawn characters of local people, churchmen and shopkeepers. Paul Monaghan has a strong part as Carney, the local butcher who is walking out with Alfie’s sister Lily, a complex character who doesn’t really understand her brother but is always on the lookout for just the right girl for him.

The transfer to the Arts Theatre seems to have been without problems. James Turner’s designs of the St Imelda’s church hall have been adapted for the proscenium stage to advantage, while Chris Peake’s band, which includes mostly actors in the piece, plays Stephen Flaherty’s music with great brio. The songs fit well into Terrence McNally’s seamless and often very witty book. The company songs such as ‘Going Up’, ‘First Rehearsal’, ‘The Streets of Dublin’, ‘Art’ and the title number are all strong, well executed, while ‘Love Who You Love’, ‘Confusing Times’, ‘The Cuddles Mary Gave’ and ‘Welcome to the World’ would bring a tear to any eye. It’s such an entertaining and moving show that one wonders why nobody has brought it to London before the enterprising Union Theatre stepped in with what now should be a deserved West End hit for it.