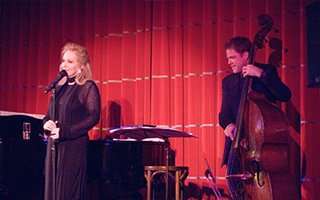 It is fitting that Stacy Sullivan starts her tribute to Peggy Lee (1920-2002) with a number, ‘I don’t know enough about you,’ that she wrote with her first husband, Dave Barbour, for it not only displays Lee’s dexterity as a songwriter but also demonstrates that Sullivan has a similarly persuasive way with a tune and captures the sly humour that Lee displayed in her lighter numbers. She could also be heartbreaking with a slow ballad. Though there is a touch of the huskiness that Lee possessed, Sullivan does not try to imitate her. She displays splendidly individual musicianship that makes her jazz-tinged renditions a total joy. There is enough of Lee, though, both physically and vocally, to remind us of the show’s theme. Lee’s idols were Maxine Sullivan, Ella Fitzgerald and Billie Holiday, each a superlative vocalist, and Lee also achieved a similar stature over four decades – in the early days of LPs, Fitzgerald, Frank Sinatra and Lee were the three most-revered singers of popular songs. 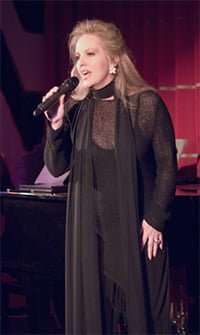 Lee lived for music and continued performing even when confined to a wheelchair. Born the seventh of eight children (“I got that from Wikipedia”, Sullivan tells us, “so it might not be true!”), Lee loved singing from when very young. As soon as she finished high school she bravely fled an unhappy home life to pursue a career as a vocalist. In 1941 she replaced a departing Helen Forrest as singer for Benny Goodman, but fell in love with the band’s guitarist. Goodman had a rule that there should be no romancing within the unit, so he fired Barbour. Lee followed him and retired after their marriage to raise their daughter. She returned to singing with recordings for Capitol and Decca, up to 1969, when she introduced ‘Is that all there is?’, which Sullivan does not sing – she considers it too similar to ‘Where did they go?’, a poignant number I had not heard since Diana Dors sang it in her cabaret act.

In her long career, Peggy Lee featured hundreds of great songs, allowing Sullivan a rich catalogue from which to choose. She gives due tribute to Lee’s secondary vocation as a creator. ‘You was right, baby’ was written with Barbour, who also co-wrote two of her biggest hits, ‘It’s a good day’ and ‘Mañana (is good enough for me)’, though we hear only a few bars of the latter song banned for a while in Mexico until the authorities conceded that it had been written with goodwill. Other Lee compositions which Sullivan successfully revives include ‘I love being here with you’, ‘Folks back home’ and ‘He’s a tramp’, part of her and Sonny Burke’s engaging score for Disney’s Lady and the Tramp. Sullivan tells an amusing tale of Lee’s battle in the courts to get a fair return for her contribution to the movie (she won) and also mentions, though the marriage of Lee and Barbour was stormy, that he was her true love, and suggests that when Lee wrote with Victor Young the title song for the 1954 Joan Crawford western, Johnny Guitar, she was thinking of Barbour with lines such as “You can be cruel, but you can be kind, I know.”

Sullivan further tells of Richard Rodgers’s disdain for Lee’s transformation of his sprightly waltz, ‘Lover’, into a relentlessly pounding hit-parade favourite. Sullivan also interprets ‘My romance’, ‘That old black magic’, ‘Cheek to cheek’ (to an effective vamping arrangement), ‘Till there was you’ and ‘Hey, there’, given a thrillingly complex setting. Sullivan has superb musicians backing her – Jon Weber’s solos are particularly sublime. Sullivan’s account of Lee’s life and career is quite brief and concentrates on the musical aspects (there is no mention, for instance, of her Oscar nomination), but when the songs are this delightful that can only be for the best.