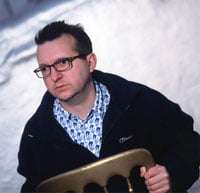 Our musical tastes are often more rational and consistent than the intuitive side of us likes to imagine. I have been a keen admirer of the work of Mark-Anthony Turnage since my very first encounter with it at the first performance of On All Fours in 1986. Twenty years later, an impulse purchase of “Walking in the Sun”, the fifth and latest of Barb Jungr’s magnificent recordings for Linn Records, made me an instant fan. A visit to her website revealed she had embarked on a collaboration with … Mark-Anthony Turnage.

Clutching two of Barb Jungr’s CDs for autographing in true fan style after a recent performance during her UK tour, I was able to ask how her and Turnage’s paths had crossed. Her answer – Richard Rodney Bennett – made immediate and perfect sense (and also attests to the latter’s largely unsung influence by example on the ‘fusion’ music of today).

“About Water” is one of the Southbank Centre’s commissions to inaugurate the reopening of the Royal Festival Hall (albeit for performance in the Queen Elizabeth), which has visibly and audibly breathed new life into the satellite venues in the area. The work is an evening-filling tapestry of songs, both original and arranged, on the theme of water, with several purely instrumental numbers interspersed. The forces comprise a jazz singer, four ‘straight’ singers, a jazz quintet and a chamber orchestra of 19 players – although the instrumental and stylistic boundaries are far more blurred than a bare itemisation suggests. The authorship – “Mark-Anthony Turnage with Barb Jungr” – is also blurred. Four of the song texts are by Jungr (another two are by Turnage), the choice of pre-existing songs appears to have been collaborative and I suspect that Jungr had a fair degree of input into the arrangements for the jazz quintet. Equally blurred is the boundary between notation and improvisation, a Turnage hallmark. Without a score it was impossible to tell whether some extended passages involving the quintet were one or the other or indeed an admixture of the two. The aural effect was a relaxed fluidity entirely appropriate to the subject of the work.

An opening instrumental number, ‘River Processional’, nailed the stylistic colours to the mast in an instant – an irresistible ‘swing’ bass overlaid with astringent lines in the orchestra. The first vocal setting hit home early – a limpid, entranced setting of the traditional shanty ‘Gray Funnel Line’ with the sparest of accompaniments featuring the Armenian duduk, an instrument that is the aural equivalent of a Middle Eastern halva bathed in honey. Jungr brought a transfixing simplicity to the pentatonic melody that left no doubt about her centrality amongst the arrayed forces.

The duduk returned hauntingly in one of the last songs, ‘Antelope Canyon’, a setting of great subtlety to an inspired text by Jungr. Other highlights included a wonderfully counter-intuitive arrangement of Otis Redding’s “Sitting on the Dock of the Bay” (probably the best-known of the imported numbers) which ends as a veritable knees-up and a blast of an arrangement of Al Green’s “Take Me To the River”. All the forces came together to heart-stopping effect in the final number, an ecstatic rendition of Nick Drake’s “River Man”, the beautiful melody passing back and forth between Jungr and unison lines in the orchestra.

The original Turnage compositions were vintage too, the numerous surface influences – Britten, Copland, Henze and (so I thought) Joni Mitchell’s epic “Paprika Plains” – by now effortlessly absorbed into the readily discernible Turnage manner.

The work was borne aloft by its inspired performers. The jazz quintet was a truly virtuoso team underpinned by the wondrous fluidity of John Patitucci’s bass and the rapturous piano-playing of Gwilym Simcock. The vocal quartet was timbrally well-matched in three ‘madrigal-chorales’. Stefan Asbury directed the whole evening with quiet authority.

But Barb Jungr was the star of the show. Performing a challenging vocal part more or less from memory, she was at once perfectly meshed into the musical fabric around her whilst creating the illusion that it was meshed around her voice. Her exceptional range, both in terms of tessitura and characterisation, was everywhere apparent. Amazingly she still had some stamina in reserve for an encore of “Take Me to the River” to which a white flag seemed a more appropriate response than applause.

The CD-friendly length of “About Water” encourages the hope that a recording will follow. The work is a triumph for all concerned.