Choir of the AAM
AAMplify Choir 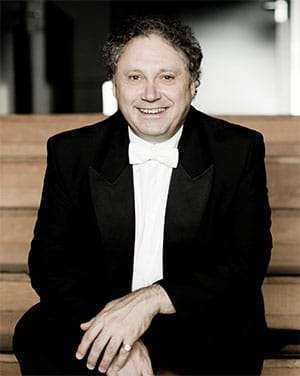 This feast of final Symphonies, a potentially very long evening, required pre-arrival sustenance and interval refreshment, twice. The enticement was to have these three great works juxtaposed, and such a Triple-X won’t happen often in a concert! Starting a little earlier than the norm, at 7 p.m., as to when we might get away, well, tempos and repeats would play a part in determining this. I’m not totally sold on ‘authentic’ stratagems. I lean more to using a goodly number of strings, with vibrato, and adopting spacious speeds, such as an aged Karl Böhm, say, would have put his name to. And certain exposition repeats can be considered mandatory (at least by your correspondent) – for example, both of them in the finale of the ‘Jupiter’ and all in the scherzo of Beethoven 9. Not that these are always observed, certainly not by Böhm (1894-1981) and numerous fellow-conductors of his generation … but in a ‘period’ performance?

The ‘Jupiter’ kicked things off, the first movement martial and lyrical by turns, horns, trumpets and hard-stick timpani to the fore. Richard Egarr, eschewing a baton and a podium, conjured an energetic and eager conception, the small forces (from six first fiddles down to two double basses) not backward in producing a hall-filling sound, even if a few interpretative mannerisms – the odd lingering, the occasional over-emphasis – felt conspicuous. The Andante cantabile second-movement flowed along expressively – anguished and consolatory – and the Minuet was very lively, the Trio continuing in a similar vein if with some exaggerated characterisation. Then it went wrong. Having observed every repeat thus far, Egarr ignored the finale’s two. If the fugal coda was exhilarating, with a resounding flourish to round things off, those ‘cuts’ ensured that this miraculous movement was diminished in itself and also overshadowed by what had gone before. The programme went to the trouble to suggest that the rendition would last 38 minutes. It took 33.

Strictly speaking, all of Haydn’s last twelve Symphonies (93-104) are of the ‘London’ variety but only No.104 has claimed that nickname. The AAM remained as before in terms of personnel, if adding a pair of clarinettists. Egarr ensured that the Adagio introduction was of majestic expectancy and the Allegro sprightly, exuberant and vividly detailed. But it was also treated parsimoniously, the exposition repeat going for the chop, so too the one in the finale, which was taken so fast, the players’ only concern being to get the notes in place; harried as they were, they more or less managed it. There can be a powerful sense of valediction to this last movement (particularly so in Hans Rosbaud’s decades-old Berlin recording for Deutsche Grammophon), but nothing like it emerged here, the music curtly dismissed. The second movement had enjoyed a certain elegance and flexibility – Egarr is neither pedantic nor earnest – but the Minuet was a blur and with the contented sentiment of the Trio then squeezed into place with tell-tale retards to the tempo suggesting that things had been misjudged. Frankly, Haydn was sold down the Thames here – and in a mere 22 minutes; the programme went for 26. The first interval had been made to seem superfluous.

Such swings and roundabouts would also identify this outing for Beethoven 9. With a larger AAM than hitherto, the conductor now utilising a podium, and all performers on the platform from the off, the vocal soloists stationed between orchestra and chorus, the conductor’s interpretation was generally positive. Leaving aside what might now be termed Egarr-isms, such as halting the current with over-generous punctuation, the first movement was bracing and boundary-breaking, taking symphonic music further than it had ever gone before, the opening Allegro mostly an unstoppable maelstrom. The scherzo was athletically considered and – hurrah! – all repeats were observed (and, indeed, with an extra one taken – the first section of the scherzo when it returns after the trio, although Riccardo Chailly, Colin Davis and Michael Gielen have done similarly), the trio itself bubbling along vivaciously yet curvaceously. Nevertheless, for all the unflagging impetus, Egarr a hands-on dynamo, and however brilliantly Benedict Hoffnung played, the timpani could be overly dominant.

Let’s not worry about the alleged slow movement, here unsettled and hasty – not so much Adagio with Andante contrasts but Andante being wrestled by its con moto sibling – for the Schiller-inspired finale was a triumph, opening in suitably chaotic terms, then with the ‘Ode to Joy’ theme given simply if with largesse. When conflict returns, it was wonderfully tempered by Andrew Foster-Williams’s benevolent “not these tones” speech, but heaven knows what his bizarre embellishing was about, apart from raising a quizzical eyebrow. After this, all was stirring and satisfying, whether an enjoyably easygoing ‘Turkish March’, Benjamin Hulett an heroic tenor, and featuring a very tall rather than a curved contrabassoon, some noble and fraternal singing from the AAM Choir and AAMplify (the latter consisting of students from Guildhall School, RNCM, and Emmanuel College), and also the first-rate lady vocal soloists – this was a really impressive quartet – and all was sailed along with propulsion to a festive conclusion.

The ‘ancient’ instruments (recorder-like flutes, reedy oboes and unbuttoned horns) hadn’t always been obedient to their masters, but there was a generosity of spirit from all concerned, and Egarr doesn’t allow rudderless. That said, even a smidgen of Furtwängler’s spiritual divination in the third movement would have been welcome, and Klemperer had a particularly comprehensive view of this work (try Testament SBT1177 for a stunning live performance conducted by him), yet what Richard Egarr and his company produced here had, for the most part, a drive, commitment and life-enhancing glow that lit up the room for 63 minutes: the programme said 65! The concert finished at 9.55. Beginning on 4 October with Monteverdi, the AAM has nine Barbican Hall/Milton Court concerts next season.