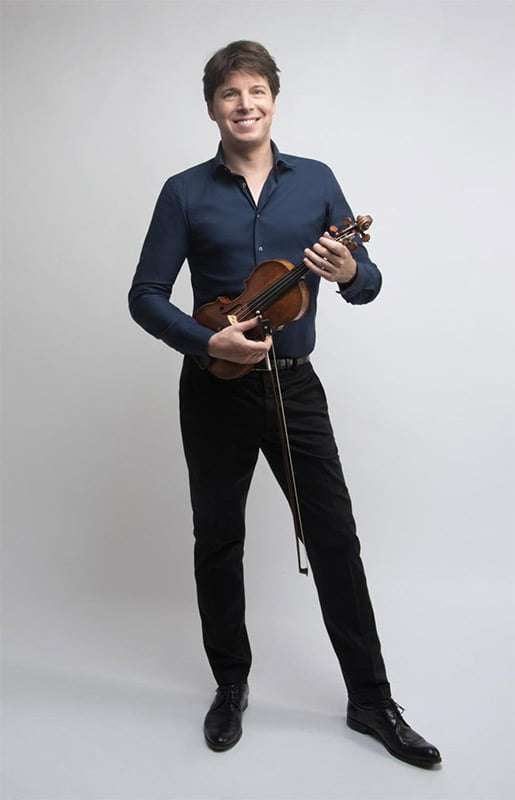 Tchaikovsky’s Violin Concerto provided an engrossing central feature for this concert. The rapport between Joshua Bell and the Academy of St Martin in the Fields – of which he has been Music Director since 2011 – was obvious and the exactness with which the accompaniment matched the soloist’s phrasing suggested very thorough rehearsal. This was a solo performance of considerable grace in a demanding work. With Bell it is the musicality that shone through, and he used his skills to portray a true romanticism.

There was an unhurried richness from the outset, spiced by slight emphasis on significant phrases featuring a touch of rubato that was matched by the orchestra. Bell’s reading of the cadenza was an expansion of the music, with none of the agonised forcefulness which some performers impose. In the lovely ‘Canzonetta’ Bell enhanced the warmth of his playing with delicate use of portamento, and in the Finale he was daring; many changes of tempo are required and the frequent passages where slow accelerates into fast are difficult enough, even with a conductor, but with Bell carefulness was not an option and the ASMF was able to stay with him on (almost) every occasion. Tchaikovsky’s Concerto seemed nobler here, being much enhanced by Bell’s beauty of tone.

In his direction of the two Symphonies, there was clarity, an unwillingness to let any chord exceed its designated length and incisive emphases at ends of phrases. This made for a spick and span reading of Prokofiev’s ‘Classical’ Symphony. Detail was admirable; timpani, struck with harder sticks than usual, were excitingly accurate, and the bassoon line was clearer than usual. I was quite taken with Bell’s slight wilfulness in the ‘Gavotte’ where he exaggerated and delayed the upbeats to the main melody.

Mozart’s G-minor Symphony included a number of interesting interpretational ideas but did not entirely convince. The revised score was used. Mozart added clarinets in this version and also re-wrote the flute and oboe parts – a pity – it means we lose the lovely oboe solo in the Finale, for the clarinet is far less effective. As for the slow movement: in the revision it sounds like Mozart was simply trying to find something useful for the clarinets to do. The lightness and clarity of the woodwind section here avoided the mellowing effect of the clarinets, and the omission of the second repeat was advantageous to match the shape of the first movement, Bell’s fast tempo ideal though some may question the arching of the opening brief phrases where he used crescendo/diminuendo effects.

The Minuet disappointed – the rapid speed made it far from dance-like and the seriousness of the music was brushed over. Inevitably the tempo failed to be sustained throughout and even the otherwise immaculate horns had a ‘moment’. Rapidity in the Finale was far more appropriate but, again, the tempo was not consistently retained.

Regarding overall ensemble during the evening there was no more than a slightly questionable moment or two to suggest that the director, seated at the head of first violins in the Symphonies, might not have been in the ideal place – it must have been difficult for second violins and oboes to see him. However, the ASMF was on top form.