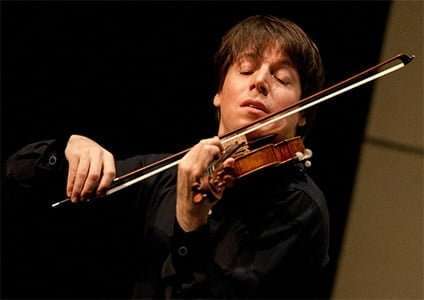 At first glance this seemed an interesting concept – a piece for solo violin, followed by a violin concerto involving chamber forces and finally a full-blown symphony. But this wasn’t the plan, for the ‘Chaconne’ was performed in a version for solo violin (unaltered) accompanied by strings playing an arrangement by Julian Milone of Mendelssohn’s added piano part written in the 1840s. This arrangement, receiving its first London performance, made the piece sound entirely different in character. Gone was the experience of hearing a lone musician tackle a formidable technical and interpretative challenge, with all the tensions involved. There was no doubt that Joshua Bell surmounted all the problems with great aplomb, but his achievement was immersed in a wash of smooth, bland writing. It almost sounded like one of those regrettable nineteenth-century pastiches that mercifully we no longer hear.

It was good to move on to unadulterated J. S. Bach in the shape of his E major Violin Concerto. Here we heard Bell’s glorious tone quality and immaculate technique to much better effect. If he didn’t quite plumb the emotional and musical depths of the first movement, taken at a brisk tempo, he found a much more inward quality in a beautifully shaped Adagio, and the infectious rhythms of the finale were a delight.

In the ‘Eroica’ Symphony Bell directed the work while seated at the leader’s desk, sometimes playing the violin, sometimes giving indications with his bow. In a pre-concert discussion the ASMF’s newly appointed principal clarinet, James Burke, had commented that the absence of a conductor places more responsibility on the players, who particularly in solo passages have the chance to make more individual contributions. Of course, such a leader-directed performance requires musicians of high musicianship, such as the ASMF members undoubtedly possess, and the ‘Eroica’ had already been played several times in a recent European tour by Bell and the orchestra.

The security brought about by performance experience, and the edge to the playing, brought about by individual spontaneity resulted in a fresh, exhilarating account. Some of Bell’s bow-led indications seemed superfluous, but no matter, it was his guiding spirit that undoubtedly produced the overall vitality. No doubt it is best for a conductor-less orchestra to move the music on, rather than take a more spacious approach that could lead to loss of tension in the absence of a controlling hand. Thus the first movement, with the exposition repeat taken, was notable for a fast tempo and incisive attack, underpinned, as throughout, by excitingly prominent timpani. There was no lingering, either, in the ‘Funeral March’, though space was created for some eloquent solos. The rapid scherzo was distinguished by an imposingly brilliant contribution from the horn section in the trio, and these players came to the fore excitingly again towards the end of a strongly projected finale.

I wouldn’t always wish to hear the ‘Eroica’ played without a conductor but this was a stimulating and entirely valid experience.