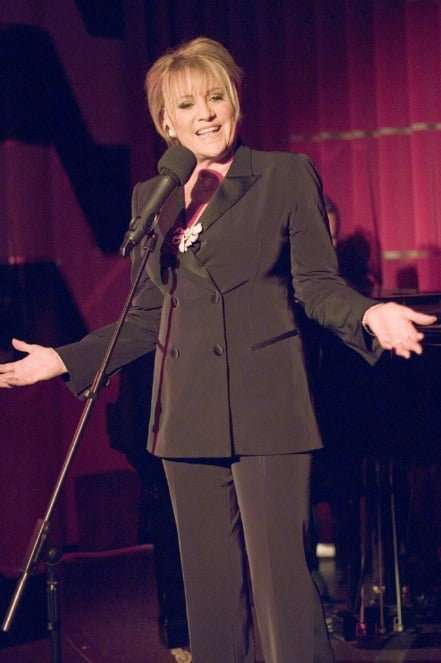 Lorna Luft returns to the Crazy Coqs cabaret room for a welcome third visit, with an act which is half new and also a reprise of popular items, including the always exhilarating medley of film songs. Luft brings the selections to life with her husky voice and her bravura, which compensate for the prominent vibrato and tendency to over-favour the ‘big finish’.

Her show is aptly titled Accentuate the Positive, for Luft surely does just that, but the song with that title is also included alongside a bunch of timeless classics with words by Johnny Mercer. A heartfelt ‘Any place I hang my hat is home’, a gem by Mercer and Harold Arlen, precedes ‘Come rain or come shine’, ‘Blues in the night’ (Arlen again), ‘Something’s gotta give’ (music by Mercer too) and ‘The Atchison, Topeka and the Santa Fe’, the great railroad number from the film The Harvey Girls, music by Harry Warren.

The song was introduced by Judy Garland, which prompts Luft to talk about the love-affair that Garland, her mother, had with Mercer (“He was married at the time and she was about to marry David Rose”). This cues one of the evening’s highlights, for down comes a screen and on it we watch Garland in an extract from one of her television shows singing, to Lorna, a number written by Mercer especially for her. Titled – what else? – ‘Lorna’, it is sung by Garland to her daughter (aged about 11) and is a very moving few minutes.

The following section of Luft’s evening is devoted to great songs from flop shows. Luft concentrates on the musical On a Clear Day You Can See Forever, and on pondering the reasons why a musical with such a distinguished score (by Burton Lane and Alan Jay Lerner) could fail, she gives a rundown of the plot which is hilarious, as well as making it quite clear why it failed. (A revival at the Union Theatre last year revealed that it doesn’t even have a valid ending.) Luft does full justice to a quartet of numbers that include the title song plus ‘Hurry, it’s lovely up here’, ‘Come back to me’ and ‘What did I have that I don’t have?’ Then comes the ever-popular selection of songs that failed to be nominated for Academy Awards. Luft still does not reveal that the rules allowed only one song from a film to be considered, thus ‘Have yourself a merry little Christmas’ made way for ‘The trolley song’, and the many hits that filled Swing Time had to stand aside for ‘The way you look tonight.’ It is still a fun idea, though, and in that era of great songwriting the list is an awesome reminder of the wealth of melody that issued from the screen compared to more recent times.

Luft returns to Mercer for one of her favourite songs, the gorgeous ‘My shining hour’, written with Arlen for the film The Sky’s the Limit and given a beautifully plaintive rendition. It was, incidentally, nominated for an Oscar, in place of another of the film’s songs, ‘One for my baby’. Throughout her programme Luft has superb rapport with the audience, and at the end we were all happily clapping along to her beguiling rendition of ‘White Christmas’.