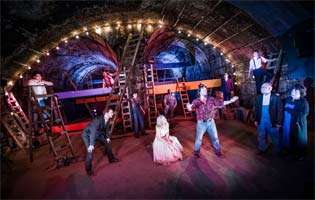 William Floyd Collins (1887-1925) was a famous pioneer cave-explorer. He lived and worked in Kentucky where there are hundreds of miles of interconnected caves. In 1925, whilst on a recce to try and discover a new entrance to the Mammoth Cave National Park, he became trapped in a narrow passage some fifty-five feet below the surface yet only 150 from the cave entrance. His foot was lodged under a rock. Due to the confined space it was impossible to free him, even though food and a light were passed to him through a narrow gap. He was able to talk to his would-be liberators, but his fate was sealed. Eventually a new shaft was dug in an effort to reach him, but was three days too late.

Although Collins was never rescued, a huge media circus sprang up around the accident and he became the unwitting tourist attraction he had hoped to develop for his family’s Crystal Cave. Much of the hype surrounding the incident was due to an ambitious young reporter and radio journalist, William Burke ‘Skeets’ Miller, of the Louisville Courier-Journal, who was small enough to crawl along the underground passage, speak to Collins, and report back to his paper and the newly formed radio network. For his work on reporting the story, and for endeavouring to help rescue Collins, Miller was awarded a Pulitzer Prize. 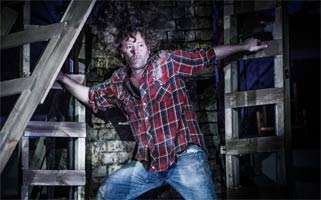 With the media on board, Crystal Cave attracted immense publicity that drew visitors in their thousands, with stalls selling food and souvenirs in a carnival atmosphere and showed America at its venal worst. In 1951 Billy Wilder made a film (Ace in the Hole, with Kirk Douglas and Jan Sterling) that was inspired by this event, along with another incident of a girl who died after being trapped down a well. Both tragedies attracted thousands of gawping bystanders and, although Wilder’s story was fictional, it reflected the same attitudes to both incidents, which the US cinemagoing public and most reviewers couldn’t take. The film (which Paramount Pictures renamed The Big Carnival before its release) was Wilder’s first commercial and critical flop. However, the film, in its original title, is now recognised as one of the great dramas of the 1950s; and in today’s world of journalistic sleaze is as relevant as ever.

In writing a musical based on the Collins tragedy, Adam Guettel chose some strong material that is hardly the stuff of your average Broadway musical. Perhaps only Stephen Sondheim can get away with putting a mirror up to the American way and show the negative side of things and still hit Broadway. Maybe this is why, although it has played all over the US, Adam Guettel’s Floyd Collins never reached Broadway. In Floyd Collins we are down in the depths with a man destined to die. 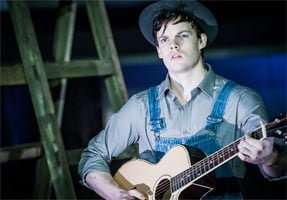 The piece is about Collins but it is also about America. Guettel draws on many genres of US music to tell the story, so that we get songs reminiscent of the Civil War, Kentucky bluegrass music, plus country and folk influences alongside Guettel’s own admitted inspirations of Stravinsky, Britten, Samuel Barber, Ravel, and Gesualdo. Others have detected Bartók and Janáček and possibly there’s something inherited from Guettel’s mother Mary Rodgers and his grandfather Richard Rodgers. From Broadway he confesses to admiring, yes, Sondheim, Jule Styne, Frank Loesser, Leonard Bernstein, Jerone Kern and, above all, George Gershwin. However, Guettel has managed to make his own distinctive music.

The Vault venue at Southwark Playhouse is an all-too-relevant space in which to place Floyd Collins. It has a subterranean, cave-like atmosphere with an attendant acoustic that is not always kind to the performers’ voices. James Perkins’s designs are simple, with much use being made of ladders to evoke climbing and depth. Glenn Carter as Floyd, is for the most part confined to singing while lying down and, for the sake of verisimilitude, never leaves the stage, not even during the interval. He gives a strong, heartfelt performance that is both beautiful and chilling.

Ryan Sampson as ‘Skeets’ Miller demonstrates a credible dichotomy in his character as someone who, although desperate to help Floyd escape, also has his mind on furthering his own career. Gareth Chart also impresses as Homer, Floyd’s brother, particularly in a duet with Floyd in the finale to Act One, ‘The riddle song’, a showstopper. Robyn North as Nellie, Floyd’s sister, also shines in ‘Through the mountain’. Good support comes from Morgan Deare as Lee Collins, Floyd’s father, who is bewildered by the whole event, and Kit Benjamin as H. T. Carmichael, who wants to cash in on the media hype.

This magnificent cast brings the tragedy to searing life through Tina Landau’s excoriating book that peels away the layers of human dignity to find repellently inhuman attitudes beneath. Most of all, though, it is Guettel’s music that rises to the occasion. The eight-piece band does wonders under Tim Jackson’s fluid direction. Floyd Collins is a serious and mature work that deserves a wider showing. Maybe one day it will reach Broadway.