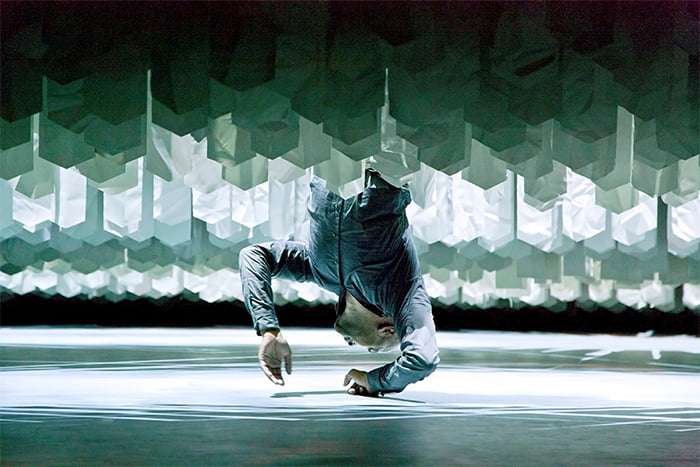 It is over six years since Akram Khan created his highly successful one-man evening DESH, during which time he has toured it to great acclaim across the world. It is easy to see the reasons for its popularity: a spectacularly designed and lit eighty minutes of often sheer theatricality with the thread of Khan himself running through it. It is difficult to resist Khan, a highly accomplished kathak-trained dancer who has fused his Bangladeshi artistic inheritance with contemporary Western dance, into which already fascinating mix he adds his own mercurial personality, dry-humoured wit, self-deprecation and an an engaging directness.

DESH, or ‘homeland’, indicates the underlying theme (or themes) in this evening of seemingly unrelated episodes or vignettes which display a dizzying heterogeneity, the disparate parts ultimately adding up to the whole. Khan, through his dancing and his stagecraft, explores himself, a Wimbledon-born Bangladeshi with all the questions of identity that throws up within him. A core element is his relationship with his now-dead father, a cook from Bangladesh who, as we discover obliquely, came to the U.K. to escape the horrors of absolute ideals imposed by an emerging country and national identity after the armed conflict of 1971. Khan’s father’s homeland when he left the sub-continent was not the homeland of his birth, his life in the U.K. was in part in a new homeland, and yet, as Khan suggests, there always remained a disjunct. For Kahn junior, born in the British capital, his Bangladeshi heritage jostles with his existence as a British man and father – he is, after all, a noted kathak dancer who has fused this side with other influences and traditions. 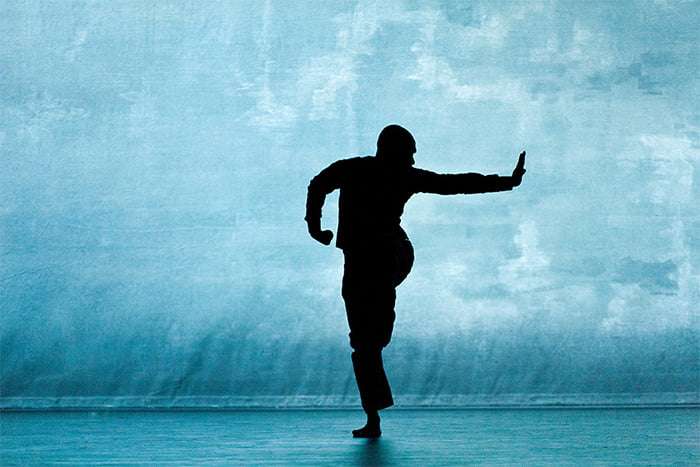 All this comes across in a myriad of mediums: from mime and puppet show, to children’s story and circus, from expressionist movement to kathak, all delivered by Khan who barely leaves the stage throughout 80 minutes of magic-realism. He is aided by superb designs, lighting and projections which create whole visual worlds for each episode: travelling bars of light and the sounds of a busy Dakkar street see Khan dodge traffic and street people, extraordinary children’s book moving video projections of the forest, its animals, even the billowing waters of the river, allow Khan to interact with what we see in a delightful flight of fancy, eliciting coos from the audience.

The stagecraft becomes increasingly ambitious and adventurous as the evening develops, culminating in the huge lighting bars of the theatre hung with countless strips of material descending and rising, lit with undeniable brilliance by Michael Hulls, through which Khan passes and, at one moment, from which he hangs. If there is any caveat, the ever-increasing scale of the stage effects begins to diminish Khan, whose early scenes are shot through with an intimacy and an almost delicate artistry. Using the top of his own shaved head marked with rudimentary eyes, nose and mouth, Khan becomes his own father, body transformed into the hunch of old age, voice altered, as father and son converse. It is a brilliant concept, as, for Khan, his father is within him, is integral to him and, in this creation, rightly emerges and disappears from the artist himself.

80 minutes is a long time to sustain and Khan gets away with it… just. To do that, he uses the extraordinary creativity of his design team to showcase his own artistry which starts with his superb dance talent but also includes an ability to peel layers from his own persona and make something of each and every one without even a hint of self-indulgence. Few artists could have contemplated, let alone achieved, the same.