In June, in England, there is so much going on. The Aldeburgh Festival takes priority because there’s always something very special you don’t get elsewhere. The Aldeburgh ambience is unique. With Pierre-Laurent Aimard as director, Aldeburgh is now, even more than ever, an important part of the European music year.

Aldeburgh has, of course, been a cradle for British composers, but, as Benjamin Britten intended, it is not insular. So this concert placed the UK premiere of George Benjamin’s Duet for piano and Orchestra (2008), with the composer’s spiritual forbears, Debussy, Ravel and Elliott Carter, the latter, aged 100½, in attendance. Being present on this occasion felt like being part of a family, of a creative community such as Britten and Peter Pears envisioned when they started the Aldeburgh Festival 62 years ago. The programme also included Julian Anderson’s “Shir Hashirim” for soprano and orchestra.

Benjamin’s piece was written specially for Aimard, and premiered last summer at Lucerne. It’s a new departure for Benjamin, his first piece for piano and orchestra. His written description of it describes it succinctly. “The piano has an enormous pitch compass and is capable of accumulating complex resonating harmonies, but each note begins to decay as soon as it is sounded. On the other hand, stringed and wind instruments can sustain and mould their notes after the initial attack”. Thus Benjamin tries to find common ground restricting the pitch range of the piano, avoiding the higher registers where decay occurs quickly. Percussion, harp and pizzicatos create attenuated sounds that meet the piano on its own ground.

The piano part is spare, single notes occurring in series, like flurries. It evoked the movement of birds – short, quick jerks expanding into flourish as they take flight. This concert may not have included Messiaen, but he was there, in spirit. In Duet for Piano and Orchestra the soloist and the orchestra do not interact in the usual way, but observe each other. Then, with a punchy crescendo, it’s over. Benjamin’s music often sounds pointillist, like detailed embroidery, but here there is incisive design, and clarity of direction. 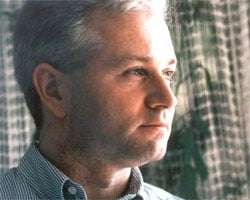 Hearing Benjamin in the context of Debussy, Ravel and Elliott Carter demonstrated his roots in the French tradition. Benjamin conducted Debussy’s Prélude à l’après-midi d’un faune with a feel for the purity beneath the languorous sensuality.

Elliott Carter, too, has roots in the French tradition. His father had business connections in France, so Carter grew up bilingual, spending long periods in Paris. The first of his Three Occasions celebrates the 150th-anniversary of the state of Texas; it’s exuberantly lively. If Benjamin’s approach wasn’t quite as free as the spirit of the piece, he more than compensated in the way he conducted the other two Occasions, ‘Remembrance’ and ‘Anniversary’. Hearing the latter was particularly moving as it was written to celebrate Carter’s 50th-wedding anniversary. Carter and his wife Helen were extremely close: when she passed away, those who knew the coupled worried, as one does when partnerships that close end. Benjamin brought out the tenderness of the piece beautifully. When Carter stood up, unaided, to acknowledge the applause at the end it was intensely poignant.

Yet Aimard’s performance of Ravel’s Piano Concerto for the Left Hand was by far the musical highlight of the evening. This also brought out the best in Benjamin and the BBC Symphony Orchestra, the slow lugubrious sections full of portent, the contrabassoon solo especially well played, its sonorities evoking inchoate emotions. Aimard’s intense, uncompromising fervour made the feel almost shockingly fresh and vivid. The piece was written for Paul Wittgenstein who lost his right-hand in the First World War; hence the manic ‘military’ overtones, here deftly executed. Passion doesn’t have to mean sentimental excess. Aimard played with dignity and strength of attack.