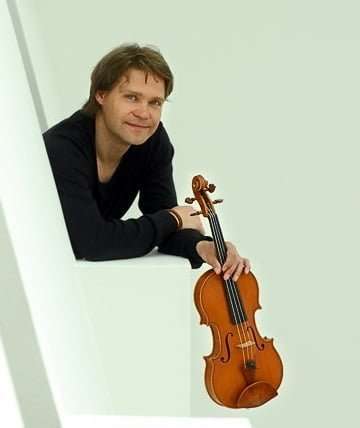 I won’t mention the incident with the umbrella – that is between me and a lady from BBC Radio 3 – but I will heap praise on this band of strolling players who bought some string-orchestra classics down from Aldeburgh, and were returning there for a Good Friday second showing. Under the auspices of the year-round Aldeburgh Music (related to the Festival but not in itself the same) and the Britten-Pears Young Artist Programme, here were 22 “Young Artists” (of 11 nationalities), the five Principals bringing them together, being bridged “between conservatoires and professional life.” Those principal players (as listed) doubling as tutors (from Berliner Philharmoniker, Leipzig Gewandhaus and Mahler Chamber Orchestra) had led a week’s course at Aldeburgh, which went beyond rehearsing the music, as discussed before the concert between Roger Wright (Aldeburgh Music) and Markus Däunert, the latter wishing to share his many experiences with the younger musicians and to emphasise that in an orchestra everybody is important. Certainly true here. Däunert expressed his delight with the facilities and the time afforded him at Aldeburgh to explore fully a variety of details.

For the audience in Milton Court (a new wing of the Guildhall School, just near the Barbican Centre), the week’s studies were fulfilled with this concert, opening with the string-sextet Prelude to Richard Strauss’s final opera Capriccio (1942), given a wistful and cherished outing, ensuing agitation intensively developing the communication while also keeping the six lines clarified and integrated.

The Milton Court Concert Hall, while ostensibly attractive in design and acoustic, favours immediacy and (less attractive) over-colouration, something touched upon in the discussion in terms of adjusting from the Snape Maltings (mellower and more ambient) to the London venue and therefore challenging the players’ quick-wittedness with regards to sound, dynamics, tempo and interaction, safely negotiated in the sextet.

At the end of the evening, Strauss’s Metamorphosen (1945) was a bigger test of changing the prepared approach for the new venue. It went very well. Indeed Strauss’s lament for the destruction of German art (not least the bombing of Munich and its opera house during World War Two) was given a very affecting reading, one that also reminded that whatever the genesis of the piece it is also a masterpiece of elaborate and noble music. The 23 players captured well Metamorphosen’s sadness and rapture, expanding and contracting naturally. Such an organic approach had the work magnetically moving towards the few bars of the ‘Funeral March’ from Beethoven’s ‘Eroica’ Symphony that are quoted near the end, heard in the bass (“In Memoriam” written into the score at this point). In this performance one sensed the character of 23 soloists coming together in a shared act of eloquent music-making.

As for the Apollo-related works, Britten’s Young version for piano, string quartet and string orchestra (1939) is one that he withdrew after only the second performance and it languished for forty-odd years before being heard again, after the composer’s death. In Young Apollo, based on Keats’s poem Hyperion, Britten fashioned a glowing and dancing piece to represent “the new, dazzling Sun-god, quivering with radiant vitality”. For all its imaginative touches, with gestures that suggest fallout from the slightly earlier Variations on a Theme of Frank Bridge, Britten’s invention relies on repetition and too many effects during the ‘introduction and allegro design. You can understand why he forbade further presentations although there is a guilty pleasure in tasting forbidden fruit, especially in this vibrant account, Lorenzo Soulès having fun with the glittering piano part (originally Britten’s domain until he thought better of it).

Alongside Metamorphosen, the other sizeable work was Stravinsky’s Apollon musagète (1928/47). It’s a black and white piece yet it ravishes the senses, and its amalgam of neo-baroque, neoclassical and an affectionate nod to Tchaikovsky is typical Stravinsky: it could only be by him and it all belongs. Just occasionally there was a lack of impetus, yet with numerous eyes on Däunert (his ripe solos impressive, the violinists and violists standing, by the way, as throughout) the plusses were many: a gentle sway here, a syncopation there, a wide dynamic range and an impressive amplitude to the most seductive moments (generously phrased) to contrast with those intimate ones that are just as much central to the spirit of this ballet score. The sporadic use of non-vibrato made for pertinent decoration.

Music for the gods, then, and for all the course-work involved in the preparations this concert was not about how to play this music but why this music should be played.