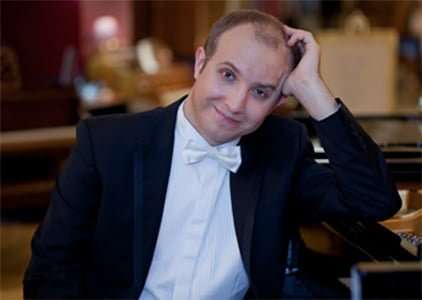 When Alexander Gavrylyuk began this BBC Radio 3 Lunchtime Concert at Wigmore Hall there was little clue to the way in which he would end it. His softly voiced account of Mozart’s D major Rondo was genial and lucid, the right-hand phrasing varying a little in dynamics but with a nice sense of overall line and structure. Some serious Rachmaninov followed, with a stony-faced rendition of the G sharp minor Prelude, and a powerfully organic account of the G minor, growing to an impressive peroration. These fires were quelled somewhat by a sensitive account of Zoltán Kocsis’s arrangement of the Vocalise, with a slower return to the main theme that was nicely done.

Little of this, however, prepared us for Pictures at an Exhibition. Gavrylyuk’s interpretation of Mussorgsky’s ubiquitous showpiece was not for the faint-hearted, revealing in startling Technicolor the forward-looking aspects of the musical language. Although it was a performance of extremes, Gavrylyuk’s choices of dynamics and tempo were properly informed and stunningly delivered, sometimes erratic and unpredictable but with a strongly artistic viewpoint. It was clear from his body-language that he was living every note, with many shapes and expressions born from total involvement in the music.

What Gavrylyuk brought to this piece were premonitions of Shostakovich in the slower bits of an otherwise unhinged ‘Gnomus’, and in ‘Samuel Goldenberg and Schmuyle’. Stravinsky, too, could be glimpsed, with strong hints of Petrushka in the quickest account of ‘Limoges, the market place’ you could ever expect to hear, the quickness of the right-hand repetitions deceiving the eye. Not everything was turbo-charged, however, and in some of the quieter ‘Promenades’ and ‘Catacombae’ there was time for reflection and deep thought. ‘Bydlo’ could scarcely have been louder, though, the old cart lumbering into action with a terrible groan as if Gavrylyuk himself was dragging the apparatus, with discords actively encouraged. At times here the sustaining pedal was depressed, so that phrases ran in to each other, but these moments were well chosen and strangely disconcerting. ‘Baba-Yaga’ got a performance of outright savagery, so demented that even the occasional wrong-note blemish was appropriate. Gavrylyuk’s view of Pictures was a combination of the nightmarish and the macabre. The culminating ‘Great Gate of Kiev’ varied greatly in tempo choices and the end with stunning.

As an encore Gavrylyuk offered Liszt’s Concert Paraphrase on Mendelssohn’s Wedding March, further elaborated by Vladimir Horowitz, which is full of virtuoso clichés and displays of technique, and was incredibly well played.