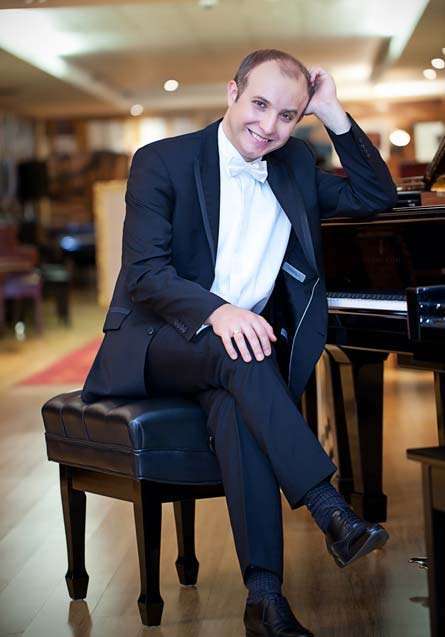 With the softer side of Schumann and the boldest features of Brahms, the programme for Alexander Gavrylyuk’s BBC Radio 3 Lunchtime Concert at Wigmore Hall had a satisfying balance. He began with Kinderszenen, perhaps Schumann’s best-loved collection of piano pieces, one that continues to appeal to young and old alike through its depiction and refraction of childhood memories.

Some of those memories were rather stretched out in Gavrylyuk’s interpretation, particularly those employing a slow tempo. ‘Von fremden Ländern und Menschen’ (Of foreign lands and people), ‘Träumerei’ (Dreaming) and ‘Der Dichter spricht’(The poet speaks) were all given copious rubato – not an invalid approach by any means, but one that pulled the phrasing around at times. The faster movements were steady and well-defined, however. ‘Wichtige Begebenheit’ (Important event) was a stately progression with an appealingly gruff left-hand tone, while ‘Hasche-Mann’ (Catch me) ran amok, a brilliant dash. Throughout Gavrylyuk played with great affection, as though evoking his own memories of infancy.

The Brahms is one of the composer’s biggest utterances for the piano, in terms of dynamics, outright virtuosity and big structure – a total of twenty-eight Variations on the usual Paganini Theme spread over two Books. Gavrylyuk chose not to re-state the Theme at the beginning of the Second Book, so there was a slightly jarring transfer between two pieces of loud music, but given the compelling technical command he had, this was a small price to pay.

Some sections were too loud, but just as one feared for the safety of the front row the pianist instinctively brought the music back within his control, showing sensitivity in the quieter moments. Gavrylyuk was particularly impressive in his dissection of the syncopations Brahms employs in Book Two in particular, with triplet figures clearly wrought. When introducing the Theme at the start of Book One Gavrylyuk made sure the octaves chimed, as though saying we had reached the top of the hour. Elsewhere his octaves were much more aggressive, becoming clangourous in places. Gavrylyuk somehow made light of the fiendishly challenging Variation XI in Book Two, but employed a beautifully judged pause at this point, introducing the tender XII as an opportunity for reflection – before an appropriately seismic conclusion that, while very loud again, was notable once more for his ability to keep dynamics just within reach.

Having whipped through the two Books in just over twenty-five minutes, Gavrylyuk had time for a compelling encore, Rachmaninov’s Prelude in B minor, Opus 32/10, which was dark and craggy, infused with Slavic passion.