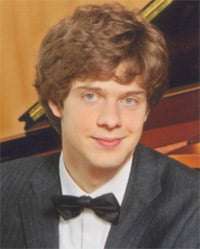 Alexej Gorlatch is the 23-year old Ukrainian winner of the 2009 Dublin International Piano Competition. He opened his Wigmore Hall recital with a very serious performance of Beethoven’s early F minor Sonata. In the first movement there were tempo variations, slight pauses and minimal use of the pedals. The Adagio was marginally too slow, the second subject earthbound and the later decoration and embellishment of the line became disjointed. Gorlatch was similarly measured in the Minuet, in which he tried to sound quixotic, but in the process lost the dance rhythm. The finale is marked Prestissimo and playing it as an allegro can work, but here the second theme was too slow and the phrasing rather foursquare. Nonetheless the sound Gorlatch produced and his overall approach were very distinctive and in a few years time he may have the concentration to sustain moderate tempos.

Chopin’s Polonaise-Fantasie is a work of incredible complexity and mastery and finding the correct underlying pulse to unify its sections is never easy. Gorlatch’s opening motto theme and his impressionistic voicing of the ensuing arpeggios were very stately. His phrasing tended to become too angular, he often seemed to be trying to clarify overlapping rhythmic and melodic lines at the expense of unity and in the central section all of this – combined with the very slow tempo – seriously impaired the flow. In the Bartók, ideally one would liked Gorlatch’s tonal palette to have been more varied and the dynamic contrasts needed to be greater. But the ‘Barcarolla’ and ‘The Night’s Music’ were tonally beautifully, if rather lacking in atmosphere. And yet, as before, there was a very powerful and individual intellect at work here and Gorlatch is a world-away from the soulless pyro-technicians that the last forty years have spawned.

After the interval Gorlatch launched into a superb account of Chopin’s Opus 10 Etudes. Here he seemed far more relaxed and the music this time flowed quite effortlessly. In the opening C major Study, the right-hand was very even at a fast tempo, but the left-hand needed to be slightly more emphatic. The A minor was well-nigh perfect; there was elfin grace, a dancing left-hand and old-world ritardandos. Gorlatch gave the ubiquitous E major Lento piece the full romantic treatment, with a slow (but marginally varied) tempo, swaying line and marvellously controlled dynamic variation – and so it went on. Not everything was perfect. The arioso element of the Sixth was under-played; in number Seven the phrasing needed more shading to highlight the underlying melody, and the brief coda of the ‘Revolutionary’ Study wasn’t quite explosive enough. With greater experience Gorlatch will master having just a bit more to give, even when appearing to be already going flat-out. By any standards though, this was great Chopin-playing.

There were three encores, by Chopin and Debussy, the highlight of which was the former’s A flat Polonaise (Opus 53). Ideally the theme would have danced slightly more, but in the central section the tempo variations and very soft staccato left-hand were exceptional. The overriding impression was of a young guy enjoying himself, without ever becoming over-assertive or crude. One hopes that Gorlatch will go on to become one of the great pianists.