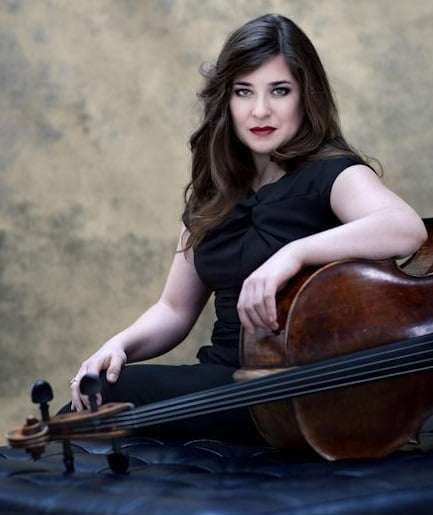 Alisa Weilerstein began this BBC Radio 3 Lunchtime Concert at Wigmore Hall with the darkest of the six Cello Suites by J. S. Bach, which gives the option for the cellist to tune down the top string from an ‘A’ to an ‘A flat’. Weilerstein chose this option, bringing out the stark nature of the ‘Prelude’ with a particularly spacious tempo and almost complete lack of vibrato. From the barest of essentials she led into the fugue, which asserted itself gradually before working through to a convincing conclusion.

After a little more lightness in the ‘Allemande’, where she was lost in thought, Weilerstein applied admirable brio to the ‘Courante’ before reverting to a bare texture for the remarkable ‘Sarabande’. Here time seemed to stop still, the principal motif taking on the air of slowly falling tears. The tempo, again unhurried, made one forget that this is a dance movement – but these qualities were emphatically restored by the pair of ‘Gavottes’, the first dancing enthusiastically while the triplets of the second ran into each other, blurring the rhythm a little but forming a whirlpool of energy. At times Weilerstein’s tuning went awry – at the start of the ‘Gigue’ in particular – but this was nonetheless a convincing and individual account of one of the most technically difficult of Bach’s Suites, justifying her extremes of tempo and expression.

Weilerstein has already recorded Kodály’s Sonata (1915) for Decca, and her familiarity with the work was clear in the convincing technical control she exerted over the piece. This was an incredibly gutsy performance, notable for the strength of its lyrical expression, particularly in the second theme of the first movement, which was beautifully intoned. All too often cellists start off this movement with too much emphasis on bravura, but Weilerstein was keen to express the music’s deeply set feelings, and did so most effectively.

With a rich legato tone contrasting with the scratched tremolandos for which Kodály often asks, Weilerstein delivered a reading of dynamic extremes. The ear was drawn to the quieter music, such as that accompanying the principal theme of the Adagio. Here she was alive to the folksy inflections of the melody, with tasteful ornamentation. The finale was also appropriately rustic, a set of dances carefully characterised and using the many colours the cello has to offer, arranging the music for several different-sounding instruments. Weilerstein’s double-stopping and intonation were superb, and once again the emphasis was on expression rather than technical prowess. A smile here and there also showed her pure enjoyment of the music.

An already generous recital was complemented by a softly voiced encore, a nicely rendered account of the ‘Sarabande’ from Bach’s Suite, BWV1009.