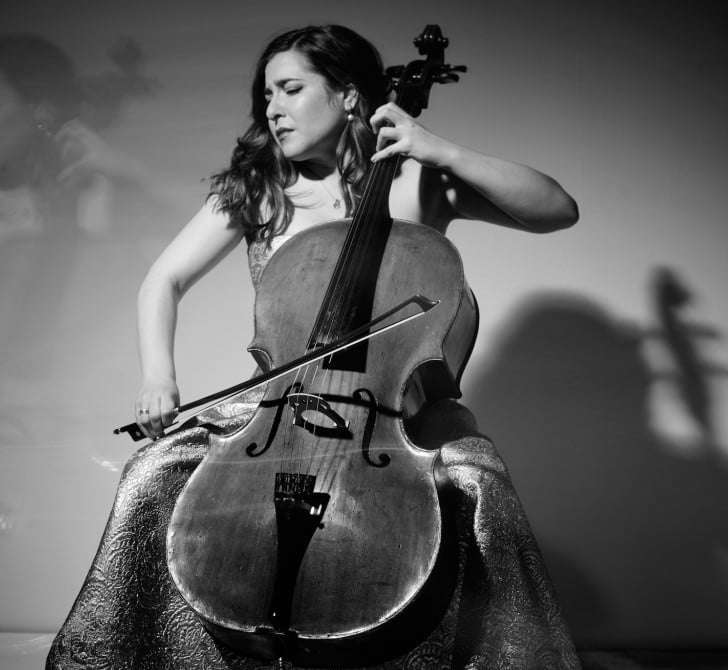 Six Preludes, thirty dances, one-hundred-and-sixty minutes of music, J. S. Bach’s Cello Suites, published posthumously in Vienna in 1825, date from the period of the composer’s employment as Kapellmeister to the viola da gamba-playing Calvinist Prince Leopold of Anhalt-Cöthen – a connoisseur of talent, we are told, “who both loved and knew music.” Every cellist, sooner or later, must journey their road. There is no greater rite of passage.

Formidable in all departments, Alisa Weilerstein is an undemonstrative player, her bowing arm naturally extended, her fingerwork quietly fearless. Analytically communicative without being pedantic, she places a premium on tone and phrasing, colouring the music at every turn. Her tuning and intonation, worth emphasising, is impeccable; unusually so. One rarely hears lines, chords or counterpoints quite so purely voiced, nor so finely placed, the bow disciplined at all levels of attack and dynamic, the gravity of sound rich and aromatic. Her finishes, the root-notes bloomed and grounded, resist flamboyant excess.

Interpretatively, the notational ‘whiteness’ of these Suites, the infinite options they pose, renders them an open-ended minefield. “In many ways”, Weilerstein argues, “the musician and the audience are given a blank canvas, so every performer and every listener brings their own vision to the music.”

The ‘Prelude to the First Suite, with a variety of bow strokes catching the attention – long, short, sustained, detached – set the mood. Every note carried meaning, each phrase was breathed, shaped and tailed off. With the slower numbers of the Second Suite came a sense of almost jazz-like improvisation, the pulse free, scarcely discernible even, the note-values in a state of flux. Now and again the occasional ruminative passage served to remind (like Claude Lorrain’s canvasses fifty years earlier) that nuanced sunsets and musings at dusk were as much Baroque property as Romantic/Impressionist prerogative.

Crowning the marathon were the ‘Sarabandes’ from the Fourth and Fifth Suites, remarkable in their pathos and poise, the single notes of the latter a time-suspended, achingly fathomless fusion of lament and soliloquy, the audience – a full-house – stilled before the seemingly impossible. The proliferation of (written-out) ornamentation in the Sixth’s ‘Allemande’ took us into a sphere of bards and legends. The stopped and open-string Ds at the Sixth’s start witnessed an accuracy and atmosphere, a meeting of pitch and timbre, of high order, technically and programmatically.

Not everything convinced. Hastily dispatched, the dance movements – ‘Minuets’ and ‘Courantes’ especially, but also several of the ‘Gigues’ – needed improved grace and step. For Casals and Bylsma, Weilerstein’s acknowledged early models, speed was a lesser criterion. That the Minuet was the elegant measured social dance of Louis XIV’s court mattered. Weilerstein’s robustness (and passing rough edges), intentionally or otherwise, seemed to veer more towards the earthy scherzo manner of Haydn or Weiss. The frantic, even savage, ‘Courante’ of the Second Suite will not have been to everyone’s taste. At the opposite extreme, her ‘Allemandes’ (Sixth aside, necessarily so) favoured a mixture of meditated tempos in which the accent on “order and calm” (Mattheson’s 1739 reference) somewhat occluded the complementary notion of “satisfaction or amusement”. That of the Fourth was an uneasy ride. Fluctuating see-saw speeds tended to rattle the Third Suite. Yes, the ‘Bourrées’ worked, the ‘Sarabande’ spoke with eloquence. But the ‘Courante’ was capricious, needing air and time. Neither the ‘Prelude’ nor ‘Gigue’ quite stabilised, and phrases hurrying towards their climaxes, then holding back, bordered on mannerism. Not all repeats appeared purposeful.

Primarily, Weilerstein’s Bach is about fantasy and imagination. Wandering a gallery of jewelled miniatures intensely framed yet dreamingly liberated is what she does best. The directness and simplicity, the organically grand, carved approach of the old masters may not yet be entirely hers – but by the end of the evening, from the innocence of the First Suite’s opening to the haunting second ‘Gavotte’ and grittily triumphant close of the Sixth, her determination was not to be doubted. She wove some wondrous spells.

One marvelled at the banquet of musical invention, the capacity of human mind and physical co-ordination, the prodigious feat of sustained detailed memory. On this cold night by the river, within call of Parliament and a troubled Brexit vote, she opened the window on a world of solace and beauty, lighting a candle for hope.