When choosing lines by Joseph von Eichendorff, Hugo Wolf was careful to avoid anything already set by his contemporary Robert Schumann. It was therefore interesting to juxtapose four of his settings of the poet with the latter’s (second) “Liederkreis”, both sung in fresh and unaffected interpretations by BBC Radio 3 New Generation Artist Allan Clayton in this BBC Lunchtime Concert.

The quartet of Wolf Lieder made for a light selection. ‘Der Musikant’ (The Minstrel) was particularly so whilst ‘Der Scholar’ was fleet of foot, Baillieu portraying rain falling on leaves. Only the most Romantic setting, ‘Verschwiegene Liebe’ (Silent Love) was more restrained, Clayton sensitive in his use of vibrato.

Finding unity between the songs in Schumann’s Opus 39 set is something of an interpretative challenge, yet one that Clayton rose to with a great sense of purpose and care. What was most impressive was his ability to project without resorting to volume. In accompaniment James Baillieu was responsive to Clayton’s inflections and changes of tone.

These qualities were particularly evident in the conversational ‘Waldgespräch’, a night-time encounter with the Lorelei in which Clayton chose two very different vocal sounds to characterise the protagonists. Schumann’s wonderful setting of ‘Mondnacht’ cast its irresistible spell, beautifully introduced by Baillieu before the tenor’s soft tone entered with a pleasing lack of urgency.

Clayton was a little breathless as he sang on the idea of pure happiness in ‘Die Stille’, or radiated a rosy-cheeked contentment during ‘Intermezzo’. These passages contrasted with the emptiness of ‘Auf eine Burg’, where he used less vibrato, or the slightly puzzling ‘Im Walde’, its ceremonial air quickly dissipated. Both sides of Schumann’s writing found a real sense of victory in the closing ‘Frühlingsnacht’, as if the darker fears consciously explored by the composer on the approach to his marriage with Clara had been fully exorcised. 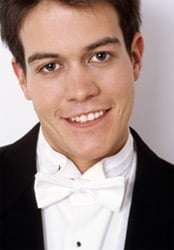 Sir Michael Tippett’s “The Heart’s Assurance” received its first performance at Wigmore Hall on 7 May 1951, performed by Peter Pears and Benjamin Britten. Despite his relatively youthful years Allan Clayton brought an impressive depth of emotion to the poetry of Alun Lewis and Sidney Keyes. In choosing words by these two poets Tippett added further tragedy to his song-cycle – both died in their twenties, while the work’s dedicatee, the composer’s close friend Francesca Allinson, committed suicide as the Second World War was ending.

There was, however, a real freshness in Lewis’s ‘Oh journeyman’, partly due to Baillieu’s successful evocation of the “cruel revolutions” of the “endless belt” in tumbling scales and arpeggios. Clayton sang with a real forcefulness as he scaled the high B with which ‘Compassion’ ends.

The contrast between the restless and the still in the title poem was pointedly marked, while Baillieu’s right-hand was tripping over itself to evoke ‘The dancer’. The apex of the cycle, and the recital, was ‘Remember your lovers’, its refrain an adaptation of “The Last Post”, given by Clayton with impressive power, incision and poignancy.