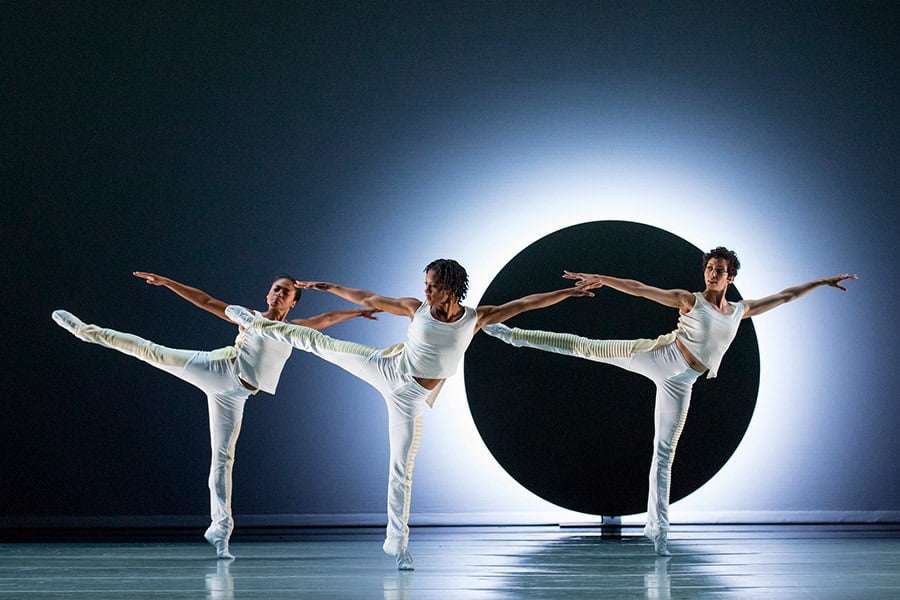 ‘A black man in a white man’s world’, the title of one of the songs in Lazarus, a new work for Alvin Ailey American Dance Theater, just about sums up the company itself, a doughty ensemble which has brought black American dance and dancers to the fore for the past sixty years. Lazarus opened AAADT’s two-week Sadler’s Wells season, a two-act work from hip-hop choreographer Rennie Harris exploring the black American experience through the life of company founder Alvin Ailey. It is, therefore, a work which looks back over the majority of the twentieth century and into our own with a collage of images and evocations set to a patchwork soundscape of undeniable power and interest. It is, however, ultimately unsatisfying, given its disparate nature and fractured semi-narrative combined with its limited and undemanding physicality. A central figure, the expressive Daniel Harder, seems to represent Ailey himself, or at least his spirit or, indeed, the spirit of the black man in America. He, like Lazarus, is resurrected (in this dance piece again and again) to experience another slice of life while the large cast evoke the American world from the 1930s to today with oblique allusions and references to folk and contemporary dance moves. The whole work is dramatically lit, part one in moody pools of light, part two brightening as the ‘freedom’ of the Civil Rights Movement liberates the American black man and woman. There are striking images throughout, none more powerful than the sight of eight of the cast slowly swaying, heads lolling to the side, a lynching evoked with telling simplicity. But all too often, the fate of the black population is conveyed by the wringing of hands, by gestures of supplication, silent screams and fearful falls to the floor. This is unsubtle stuff, emotive and manipulative and does nothing for the work as a whole. Equally, the extended contemporary ‘party’ section (for want of a better term) in the second act is more Latino carnival than anything else, and does not address the malaise of self-inflicted violence that afflicts a tranche of today’s American black urban population. Lazarus cleverly combines hip-hop movement vocabulary with modern and contemporary dance, but it is a distant experience for a British audience who have no direct link (direct or cultural) of slavery, lynchings or segregation – it can only be for us a second-hand work. ★★★ 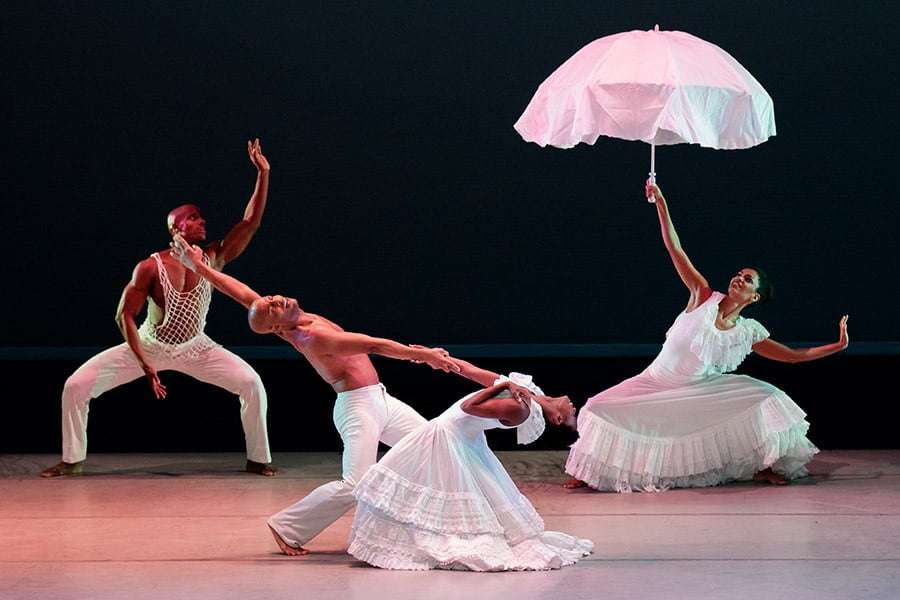 Ailey’s own Revelations from 1960 which closes every performance by AAADT, remains a powerful and engaging distillation of his memories of life as a child in pre-war Texas. It is both life-affirming and entertaining, a set of spirituals and gospel rock songs brought to life through the choreographer’s own fluid movement style, his training under and performing for Lester Horton, and, more distantly Graham technique. It is now a period work, but, as an evocation of black American spirituality from a certain period, it still works magnificently. The first night’s performance was more polite than inspired, at least until the final section ‘Rocka My Soul in the Bosom of Abraham’ when the smiles broke out and the fun began. Stand-out performances, though, from Chalvar Moneiro as one of the three men in ‘Sinner Man’ with astounding quicksilver fleetness of foot and the immensely characterful Hope Boykin. ★★★★

The company’s Programme B the next night was less well-judged. Jessica Lang has been creating dance works for some time now, and with EN breaks the 100 mark, as if that means anything in the arts. It is an un-engaging piece purporting to be about the cyclical nature of existence, and the interactions we have along the way, but then almost anything can be said to be about that. It is a distant work, fluent enough in its handling of thirteen dancers clad in white with the pale primrose highlights, but never getting beneath the surface of anything, certainly not emotion or, indeed, the essence of human interactions. Predictably constructed concerto-like with three sections including a stronger central slow movement, it makes its way along with much semaphoric arm placements and worryingly little movement on anything more than a pedestrian level. There are some expertly constructed group tableaux but AAADT’s dancers are nothing other than blandly efficient in EN, dancing away to Jakub Ciupinski’s eminently forgettable score. ★★★ 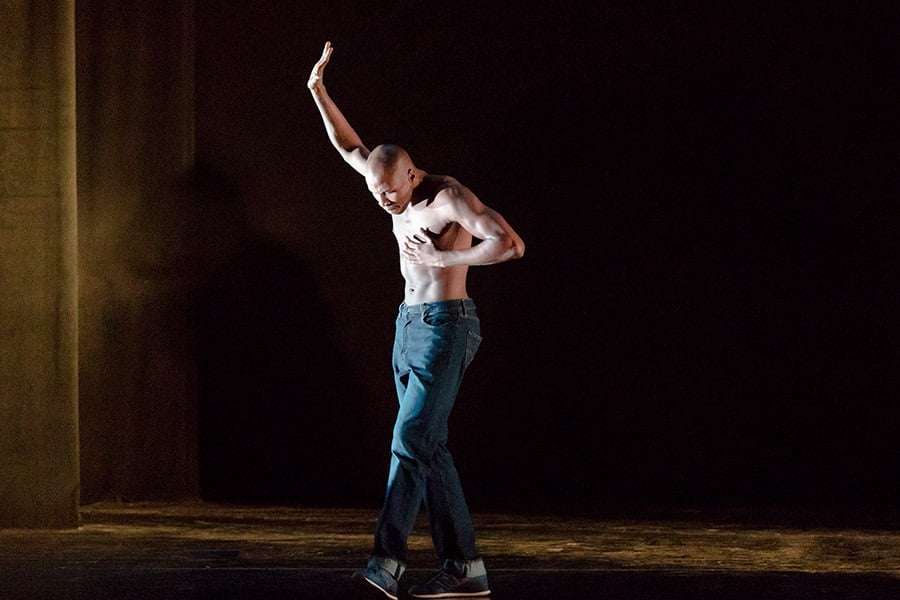 Ronald K. Brown’s The Call does at least benefit from some good musical choices, starting with Bach and moving through jazz from Mary Lou Williams to the West African-Latin rhythms of Yao Ababio and Kofi Osei Williams. Brown matches this musical variety with his choreography, passing from cool abstraction through dance hall-infused partnering to the charming and infectious snake hips and undulating torsos of the final section. Costumes for the women are single-coloured satin dresses of a distinctly latino cut while the men begin perplexingly in boxy zoot suits and finish bare-chested. They are deeply unflattering to the powerful body shape of the majority company’s dancers. Yannick Lebrun brought an extra ounce of flair to his dancing. ★★★

On the evidence of Juba, it must be hoped that the choreographer, AAADT’s director Robert Battle, does a significantly better job at running the company than creating dance for it, so encyclopaedic is its awfulness. The cacophonous onslaught of John Mackey’s score, the sound of a string quartet ritually slaughtered, is fully matched by furious, violent and utterly futile movements which combine an astounding naïvety about what constitutes choreography with a perverse desire to make his dancers and what they dance as unattractive as possible. Four victims from the company perform this St Vitus dance, their sins unknown, kitted out in a bathtub vodka-addled take on Russian peasant garb. Ugly. Fifteen minutes stretch to eons. To be avoided at all costs. [zero stars]