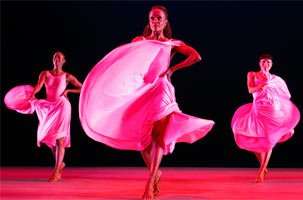 There really isn’t a British equivalent to AAADT: this essentially black dance company (although dancers from other races are represented) is mainstream in the USA in a way that is not replicated this side of the Atlantic. The company’s dance style is also ‘mainstream’ in a way that seems alien to us, weaned as we are in the UK on a diet of either classical ballet or resolutely modern dance. This means that the UK eyes at least, AAADT can seem a trifle old-fashioned, a little ‘behind the times’, even if the dancers almost always convince by their unbridled enthusiasm and engagement (a far cry from the slightly distant and reserved quality so often seen in UK dance troupes).

AAADT is, however, at a real crossroads, and displays not a little nervousness in what the future will hold for it. Founded in 1958 by Alvin Ailey, a dynamic and magnetic black dancer and choreographer, who drew on his own ‘blood memories’ of black life in Texas for his own creations, it has been led by Judith Jameson since Ailey’s death in 1989. This remarkable, charismatic great lady of dance is now about to pass the mantle on to Robert Battle (he takes up his post in July 2011).

But Battle did not know Ailey, and has grown up in a radically different world, both politically and artistically, from that of his two predecessors. He will take the company in a new direction – he cannot do otherwise – but fears exist as to what will be left behind. Two of his creations were on show in this present two-programme season at Sadler’s Wells Theatre, and give some indications of where it is all going. 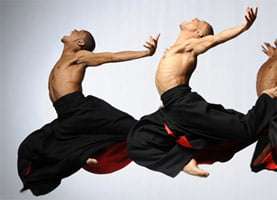 Interestingly, both were men-only pieces. The Hunt uses six bare-chested, long-skirted men who engage in aggressive-lite male posturing and bonding, with a lot of slapping and foot-stamping, all of them arranged during the central section in a sort of butch pat-a-cake set-up. A tsunami of sound accompanies it all, the very loud bangings of Les Tambours du Bronx, impressive at first, soon wearisome and, frankly, faintly derivative of Hofesh Shechter and his percussive style.

Battle redeems himself with In/Side, a deeply disturbing solo for the remarkable Samuel Lee Roberts, set to Nina Simone’s recording of Wild is the Wind. Roberts literally throws himself into ever more wild contortions, mouth agape in silent screams, body spinning and crashing to the ground. This is a remarkable performance of a physically reckless work which, nevertheless, expresses the lacerating pain of failed love. 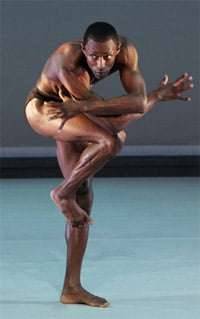 In its quality and intensity In/Side is something of an exception in the repertoire presented in London by AAADT; most of the works are, in essence, quite mediocre (despite being presented with unfailing commitment and gusto), displaying a samey quality, and often suffering from a curious disjointed nature. Suite Otis, a 1971 trifle by George W Faison is a period piece from the Huggy Bear period of American black culture, dancers clad in different shades of candy pink. It is fun, not least in the deliciously comic duet from the characterful Guillermo Asca and Tina Monica Williams, and benefits from the hugely enjoyable set of songs recorded by Otis Reading, the highlight of which is his wonderful rendition of I can’t get no satisfaction. As a work it tails off, and I secretly, naughtily, wished that the men had been given Afro wigs to complete the period feel of it all.

Suite Otis, however stands as a masterpiece in comparison with Judith Jameson’s messy Hymn, a sentimental tribute to Ailey, beginning with a spot-lit empty chair and Ailey’s own voice talking about his work. The over-long Hymn is, essentially, recorded commentary (using the words of ex-Ailey dancers), accompanied by Robert Ruggeri’s instantly forgettable music, with the dance limping behind in third place. It is all prosaic stuff, instantly veering off into the cul-de sac of sentimentality when Ailey’s own work was characterised by the spiritual.

This is a company still very much in the thrall of its now long-dead creator, somehow desperate to cling on to him and what he stood for. That, in itself, does not surprise, for the world of American black culture on which the company now has to draw for its creations is limited; Ailey’s memories of Texas in the 1930s are now shared by very few, and the cotton-picking, hand-to-mouth farmstead existence of those times is no longer known. There is now the urban ghetto world of drugs and violence, already artistically expressed in street dance, hip-hop and the like, and, ultimately, Africa.

Battle’s The Hunt, hints at African rhythms and dance and, indeed, Christopher L. Huggins’ Anointed, uses African dance with not a little success, combining it with the AAADT trademark split legs, high lifts and deep arabesques penchées and, in its final, third movement with sub-Forsythean partnering . Alas, the work suffers from the poor, dated soundscape by Moby and Sean Clements, all moody chords and frantic rhythms.

Dancing Spirit is one of those works which slew off the consciousness the instant after you see them. A mellow, undemanding yet over-long work, it fuses jazz and ballet styles in vaguely cruise-liner entertainment style, although it was graced with the luminous Renee Robinson at its centre, a now veteran artist (I hope she forgives the term) who succeeds in making the banal seem meaningful. 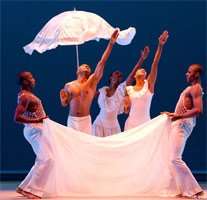 Finally comes Ailey’s own Revelations, his 1960 work which closes every performance by AAADT (will Battle be the director to decide to discontinue that particular tradition?), and all is well. Revelations is, quite simply, irresistible, and stands as a piece of living history – a series of dances to traditional spirituals and religiously inspired music, it distils the black cultural experience of the choreographer’s childhood, the roots of all African-Americans.

It is joyous, uplifting, and delights constantly with its individual reaction to each piece, a running, jumping athletic trio to Sinner Man, a deep-South baptismal procession to the river (two shimmering bands of silk) where they dance to Wade in the Water, a glorious pas de deux to Fix Me, Jesus, and a simple white-clad solo to I Wanna be Ready. The finale, Rocka My Soul in the Bosom of Abraham, women in Sunday-best hats, long dresses, and hilariously expressive fans, men in black trousers and waistcoats, literally has the audience dancing in the aisles…every night. It is glorious, it is beautiful and it is true – true to the American black experience, true to the deep spirituality and faith of a long-oppressed race, true to bubbling joyousness that even the most back-breaking work could not suppress. Long may it close every performance of AAADT, for it is one of the works in world dance which captures the essence of what it portrays. As long as a thread of Ailey’s influence is preserved, AAADT will continue to prosper.