Dancers:
Caroline, the Bride-to-be – Xiomara Reyes
Her Lover – Grant DeLong
The Man She Must Marry – Roddy Doble
An Episode in His Past – Leann Underwood 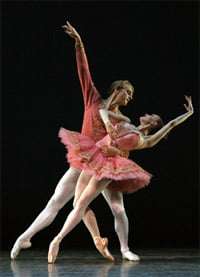 This second programme by the American Ballet Theatre was a carefully and satisfying mixed bill, showcasing ‘jewels’ from the company’s repertoire. Balanchine created his Theme and Variations for the company in 1947, with the star dancers Alicia Alonso and Igor Youskevitch. It takes the eponymous section from Tchaikovsky’s Suite No. 3 (he went on to set the rest of the suite at a later date, but the full work has never found favour). It is very much a homage to his St Petersburg, Imperial ballet roots, a divertissement in the grand manner, but with Balanchine’s trademark twists on the classical style.

ABT have performed the work since its creation, so expectations were running high, although they were in reality only partly satisfied. Part of the problem is that the American dancers are simply not ‘classical’ enough. Men are big and burly, often with over-developed leg muscles, which give a somewhat ‘lumpy’ appearance when clad in white tights. Their dancing is also characterised by a certain muscularity, which robs ballet movement of much of its grace, as these built-up hunks hurl themselves around the stage. Equally, many of the female dancers are very tall and, shall we say, healthy-looking women – nowhere was this more apparent than in the line-up of the four supporting women in which ex-Royal Ballet dancer Gemma Bond stood out as both petite and slight in comparison with the others; when the four linked arms in the second section, the height discrepancy was all that one could see, thereby detracting from their dancing.

Costumes are on the colourful side, perhaps too much so for UK eyes used to pastels and off-whites – the lead couple were in rose cream, while the four supporting couples in violet cream, a veritable bonbon counter. I liked Ormsby Wilkins’ spirited account of the score, but find the addition of a section from the finale as an overture inexplicable – the curtain usually rises to silence, and the ‘theme’ is expounded immediately. In the lead roles, both Yuriko Kajiya and Danil Simkin showed immense promise. She already phrases her movement with delicacy and musicality, clearly relishes rubato, and is both technically accomplished and scenically engaging. Simkin is a great hope and is still very young, so that he does not yet convince fully as the danseur noble – his partnering still needs some work, but his elevation, the softness of his landings, the precision of his feet and his aristocratic bearing all mark him out as a dancer of immense talent. Slightly built, he stands in contrast to the other men of the company, and shows that there is much value in purity of line and smoothness of execution. 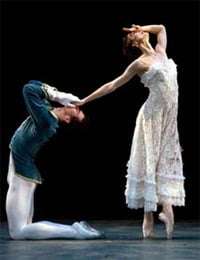 A thoroughly successful performance of Jardin aux Lilas, Antony Tudor’s 1936 masterpiece for Ballet Rambert followed. This work too has a long history with the company, as Tudor mounted it for them in 1940 and they have performed it ever since. I am willing to forget that the garden in Peter Cazalet’s designs does not feature any lilacs in favour of recalling the sensitive portrayals in this notoriously subtle and difficult-to-perform ballet. Xiomara Reyes conveyed all the anguish of Caroline, who must renounce her lover in favour of a man she does not desire. She demonstrably understands the role, and brings much understated pathos to her performance. Equally impressive was Leann Underwood as her husband-to-be’s old flame: Underwood impressed in the first programme and here brought glamour to the part and clear depiction of a woman still rather desperately in love. Slightly less impressive was Grant DeLong’s slightly vacant Lover, but he in no way detracted from a notable performance overall, ably aided by Ronald Oakland’s superlative violin playing in the pit. Jardin aux Lilas is a superb work, one of the first ‘psychological’ ballets, and a huge influence on future choreographers. ABT continue to do it proud.

Ratmansky featured again in this programme with a performance of the Act II Pas de deux from his version of The Nutcracker which ABT premiered late last year. Despite the presence of the voluptuous Veronika Part (looking disconcertingly like Esther Williams in her 1940s-style make-up), and the endearing if impossibly muscle-bound Marcelo Gomes, this is a dog’s dinner of a duet, more ice-dance than classical ballet, kooky rather than classy, deeply unmusical in its wilful lack of response to the music’s rhythm and high-points, ugly in some of its movements, dull in others. A tactful veil needs to be drawn over it, the full-length ballet mercifully far away across the Pond. 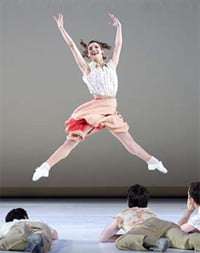 Paul Taylor is a master of modern dance and ABT are to be congratulated in their 2008 acquisition of his Company B – Taylor’s airy, open dance style suits the company well. It is a cheery setting of a selection of Andrews Sisters hits, all jitterbug and jive, but shot through with just the exact measure of melancholy – hints at army conscription, painful separations and wartime deaths are expertly given without detracting from the general joy of the dancing. It is an incredibly fine balance to make, and Taylor judges it perfectly. The dancers clearly enjoy the whole experience, not least Carlos Lopez’s bespectacled “Oh Johnny, Oh Johnny”, relishing in being pursued by seven women, his character first cousin to the hilarious Husband in Jerome Robbins’ The Concert, and Gillian Anderson, yearning in “I Can Dream, Can’t I?” for the man she can never have. Taylor uses the back of the stage for unlit dancers to pass across in silhouette, now two male lovers (that’s why Anderson will never get her guy), now marching soldiers, now dead comrades. It is simple, clever and effective; would that more choreographers understand that less is almost invariably more.