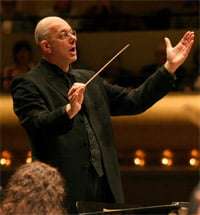 Leon Botstein has been at the helm of the American Symphony Orchestra for more than twenty years, and has been on a mission to bring obscure operatic and symphonic works to our attention. This concert featured the First Symphony of Austrian Heinrich von Herzogenberg (1843-1900), a friend of Brahms’s. Influenced at first by Wagner and later by J. S. Bach, although much of Herzogenberg’s compositional efforts were devoted to church music, he also wrote eight symphonies, three concertos and numerous chamber works, all of which fell into obscurity.

First on the program was Dvořák’s Fourth Symphony, written when the composer was in his mid-thirties and beginning to infuse his music with Slavonic elements, apparent here in the dotted rhythms that dominate the dance-music in the first and third movements, although more than a hint of Wagner’s idiom remains. The Andante second movement begins with a theme that is similar to the ‘Pilgrim’s Chorus’ from Tannhäuser, but sounding as if had been written by Brahms. The scherzo’s principal theme is based upon a seventeenth century Hussite hymn forced to step vigorously, the trio similarly, thus providing little contrast. Heroic march music dominates the finale, akin to Wagner and juxtaposed against a lyrical theme. The outer movements are lacking in artful development, repetition and an overdose of figurative passagework becoming tiresome in the finale. The ASO under Botstein gave an adequate if not particularly interesting reading of this transitional work, their energetic treatment of the scherzo making the strongest impression.

Next was the Herzogenberg, lasting about 45 minutes, a similar length to the other works on the program, if the longest. Unfortunately its material proved inadequate for its length, and the ASO’s performance failed to overcome its many deficiencies. Botstein did not make much of a case for this work, which suffers from all the defects typical of an ‘academic’ composer – undistinguished and threadbare ideas, the lack of an individual voice, frequent padding, and much recurrence. Botstein generated little spirit or nuance, which might have made the music more palatable. Occasional glimpses of Brahmsian charm were promising in the first movement, but were dispelled in what followed. If the Adagio is any indication, Herzogenberg was not a gifted melodist, and Botstein’s rather mild rendition of the scherzo, marked Allegro agitato, was anything but restless, The finale, following without pause, tried one’s patience, the accelerando at the close coming too late to compensate for the uneventful churning.

After intermission came Brahms’s Fourth Symphony, composed some twelve years after the Dvořák’s and in the same year as the Herzogenberg, and presumably intended to demonstrate “what makes a masterpiece”, but did more to accomplish the opposite. Botstein’s reading was arrow-straight, devoid of the characteristics that make it a work of genius. The performance lacked the captivating charisma of Brahms’s particular brand of romanticism and failed to bring out the music’s lyricism, bold dramatic flair, subtle nuances and inventive development. The ASO brass was harsh and ragged from the very beginning of the blandly realized opening movement, after which the too-brisk Andante moderato was robbed of its poetic beauty, its warmth of expression coming through only briefly before the close. Neither the scherzo nor the finale came to the rescue.

Pitting symphonies by a future great (Dvořák) still developing his art, then an educator who also wrote music, against one written by Brahms at the height of his powers, was an ill-conceived exercise made even more pointless by a dull performance of the latter work.