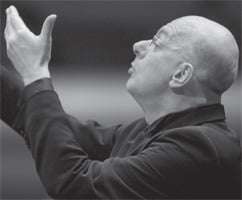 Hartmann (1905-63) is one of the most masterful and profound symphonists (there are eight such works) born in the twentieth-century. Gesangsszene is a synthesis of his oeuvre, expressionistic music conveying anguish at the brutality of tyrants, this, Hartmann’s final work, portraying a prophetic vision that the end is near. The text of Gesangsszene, from Sodom and Gomorrah by Jean Giraudoux, pronounces the doom of humanity through an allegory of the destruction of the sinful twin cities of biblical lore that amassed wealth and power to attain world domination, but caused great suffering in the process.

Lester Lynch, clad in a red jacket with black shirt and trousers, seemed an incarnation of Loge foreseeing the end of the gods in Wagner’s Das Rheingold. He sang with intensity and dramatic flair in a valiant attempt to convey the devastating power of the text against an orchestra that seemed more focused on accuracy than on conveying the score’s heartbreaking despair or its passionate outbursts of rage. Botstein conducted a temperate reading that rose to the occasion only in moments of outrage. The orchestra lacked color, nuance and character, leaving Lynch to express the painful prophesies of the text, which he did convincingly in a strong-willed and forceful performance, then falling to a whisper to speak the last two lines – “It is the end of the world! The saddest thing of all!” – left without accompaniment when Hartmann died.

After “truth” came “truffles”, Strauss’s light-hearted Schlagobers (Whipped Cream), completed in 1922. This “Merry Viennese Ballet in Two Acts” only occasionally offers hints of earlier Strauss masterpieces, and generally lacks variety of coloration, textural complexion, lilting lyricism and vibrant spirit, The story, a children’s tale, is based upon a Viennese post-confirmation custom. After the rite, the youngsters are chauffeured around the Prater, Vienna’s amusement park, and then taken to a pastry shop to indulge themselves. Here the tale begins, sweets coming alive to a fantastic march and mock battle. Princess Teablossom and Princes Cocoa and Coffee arrive and perform various dances. An unidentified young lady floats diaphanously to a dreamy tune featuring a violin solo, and an automated chef whips cream in a swimming-pool-sized bowl to the ‘Schlagobers Waltz’. Act Two depicts the dreams of one of the lads who became ill after gorging himself. They begin with fantasies in the confectionery shop, featuring Princess Praline, a liquor store, and then in a local bakery where a revolt is organized against the proprietor. Numerous cakes and pastries join with marzipan and sugarplum soldiers to besiege the owner. Princess Praline makes a grand entrance and restores peace, and the ballet concludes in a tumultuous celebration.

This seems like a perfect alternative to Tchaikovsky’s The Nutcracker for Christmas entertainment, but playing the ninety-minute score without the visual delights simply did not work. Strauss’s own Suite of eight of the twenty-two sections would have sufficed and performance was pale, lackluster, and generally lifeless, with neither orchestra nor conductor appearing interested in making a case for this work: there was no sense of fun or playfulness.