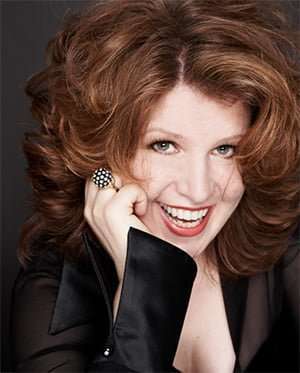 In London and New York, and many other cities, Klea Blackhurst has triumphed with a one-woman show entitled “Everything the Traffic Will Allow”, a phrase from Irving Berlin’s anthem to the performing arts, ‘There’s no business like show business’, introduced by Ethel Merman, and it fits perfectly the immensely talented Blackhurst. Close your eyes when she is singing and believe you are listening to the young Ethel. Blackhurst does not impersonate her; rather she has a clarion-clear, bell-like, perfectly enunciated style that evokes everything that made Merman so special. Blackhurst has played in Gypsy and Call Me Madam, and is shortly to star in a revival of one of Merman’s few misfires, Happy Hunting. After seeing her at the Crazy Coqs, one is now eager to see her in a ‘book’ show. With a Nancy Walker-like air of self-deprecation, she confides, “I don’t want to peak too soon.”

Surprisingly, perhaps, there are not many Merman numbers in Blackhurst’s cabaret act, but it’s a classily assembled programme of superior show tunes, some not performed that often, such as the Happy Hunting ballad, ‘The game of love’. Blackhurst starts the evening (throughout which she has the splendid piano accompaniment of Leigh Thompson) with a few bars of one of Merman’s trademark numbers, ‘The hostess with the mostes’ on the ball’, before launching into the song Jerry Herman wrote as Barbra Streisand’s opening song in the film of Hello, Dolly!, ‘Just leave everything to me’. Blackhurst’s refreshing attention to lyrics is immediately apparent as she delivers this whirlwind of a number with refreshing clarity. She then launches into the surging declaration of new-found love, ‘This is it’, from the Merman show, Stars in Your Eyes. Despite having been recorded by Judy Garland as well as Merman, this great Arthur Schwartz-Dorothy Fields number is not as well known as it should be and it’s good to hear Blackwell giving it its due.

She does not forget that other luminary of Broadway’s golden age, Mary Martin, singing ‘A cockeyed optimist’ (given a new slant by having a waltz arrangement) and ‘Dancing in the streets’, the title tune from a legendary flop, which Martin chose to appear in rather than another show she was offered, Away We Go, which became Oklahoma!. Blackhurst does not relate this anecdote and her patter was fairly minimal, with some relevant facts overlooked. Not many in the audience will have known, for example, that ‘The game of love’ had been introduced by Merman, though Blackhurst does tell us why the lovely ‘Moonshine lullaby’ is less well-known than most of the other Annie Get Your Gun songs – it was banned on radio because it glorified illegal distilleries!

Another song that is given a back story is prompted by Blackhurst’s touching tribute to the late Marvin Hamlisch. When he died last year, Blackhurst was appearing in Nashville in a workshop of The Nutty Professor, a musical version of the Jerry Lewis film comedy (being directed by Lewis himself) with a score by Hamlisch and Rupert Holmes. Only a few days earlier, Hamlisch had written with Holmes a ballad for the show titled, ‘While I still have the time’, its message to make the most of every moment. It is a theme detected in much of Blackhurst’s material (songs such as ‘Taking a chance on love’, ‘A dream is a wish your heart makes’, ‘It’s not where you start, it’s where you finish’) and she finishes her all-too-short performance with one of the classic songs of defiance, ‘Before the parade passes by’.