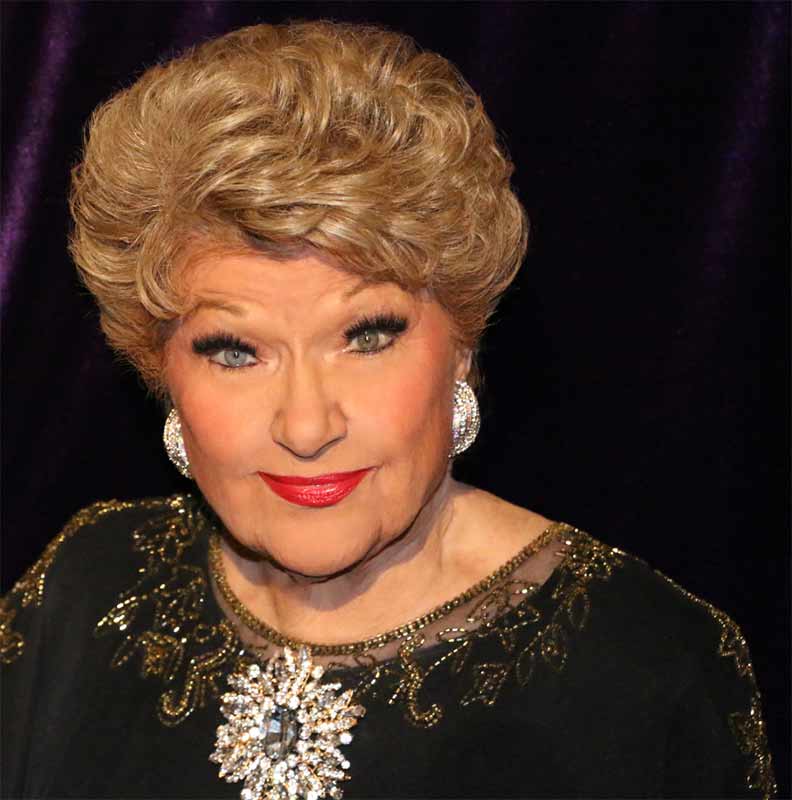 There are joyful sounds coming from the Crazy Coqs cabaret room this week, as the celebrated jazz stylist Marilyn Maye performs a set of classy songs with fine musicians in a superbly fashioned programme. It is one of the longest (around 90 minutes) to have been given here, though it seems like one of the shortest. Maye, who last appeared in London at a venue called The Canteen many years ago, is less well known in the UK than she should be – Ella Fitzgerald called her “the greatest white female singer in the world”. She may evoke memories of Sylvia Syms (Frank Sinatra’s favourite vocalist), Barbara Lea and Margaret Whiting, but she has her own style and establishes an uncommon rapport with her audience within minutes.

Opening with Jerry Herman’s paean to living life to the full, ‘It’s today’, Maye segues into Stephen Sondheim’s ‘Old friend’, and easily persuades us to join in answering the query, “Here’s to us, who’s like us?”, with a roared “Damn few!”. The positive mood is sustained with her witty repartee that draws laughs and empathy, and such numbers as Peggy Lee & Bill Schluger’s ‘I love being here with you’, James Taylor’s ‘Your smiling face’ and Randy Newman’s ‘I love to see you smile’, the latter two among several reminders from Maye that there were good songs being written after 1950! A songwriter she champions is Steve Allen, very influential – he spotted her performing in Kansas City and put her in his television series, which led to a record-breaking number of appearances on The Tonight Show. Allen wrote 8,000 songs, and in 1963 he composed a musical, Sophie, based on the life of Sophie Tucker. Maye takes two songs from it that makes one eager to hear more. The show starred Libi Steiger, who had been seen in London as Cleo in Frank Loesser’s The Most Happy Fella, but Maye would have been apposite casting.

She and her group have fun with another Allen number, ‘This could be the start of something big’, which turns into a rousing jam session. From My Fair Lady, a nicely subdued ‘I’ve grown accustomed to her face’ prefaces ‘On the street where you live’, given a surprising toe-tapping tempo as the musicians cut loose in infectious free-wheeling form. The musical’s lyricist, Alan Jay Lerner, is also represented by the lovely ballad he wrote with Burton Lane, ‘Too late now’, which Maye caresses. In the 1960s, Maye was under contract to RCA Records, and recalls being given tunes to record – regarded as potential hits before the shows opened on Broadway. These included ‘Cabaret’, ‘Sherry’ (surprisingly omitted from her programme) and her biggest hit, ‘Step to the rear’, the showstopper from the unsuccessful How Now Dow Jones, with songs by Elmer Bernstein & Carolyn Leigh.

In 1965 Maye won a Grammy as best newcomer, the first of many awards. Some of her repertoire at The Crazy Coqs is grouped into effective medleys on such subjects as happiness, rainbows and good looks (the last including ‘Can’t take my eyes off you’ and ‘That face’) and though most of numbers are optimistic and life-affirming, she notes that cabaret audiences often request sad songs (“I guess they like to sit, drink and cry”), which cues the classic Murray Grand and Elisse Boyd’s ‘Guess who I saw today?’, first heard on Broadway in New Faces of 1952. Among other featured composers are Harold Arlen, Vincent Youmans and, from the catalogue of Kander & Ebb, the little heard ‘A certain girl’ from The Happy Time.

Billy Stritch, no mean entertainer himself, provides grand work on the piano, plus a little vocalising, and the line-up is completed with sterling contributions from Joe Pettit and Eliot Henshaw. Marilyn Maye’s sublime talent and her palpable delight in communicating make the evening like a party to which one has been privileged to be invited.