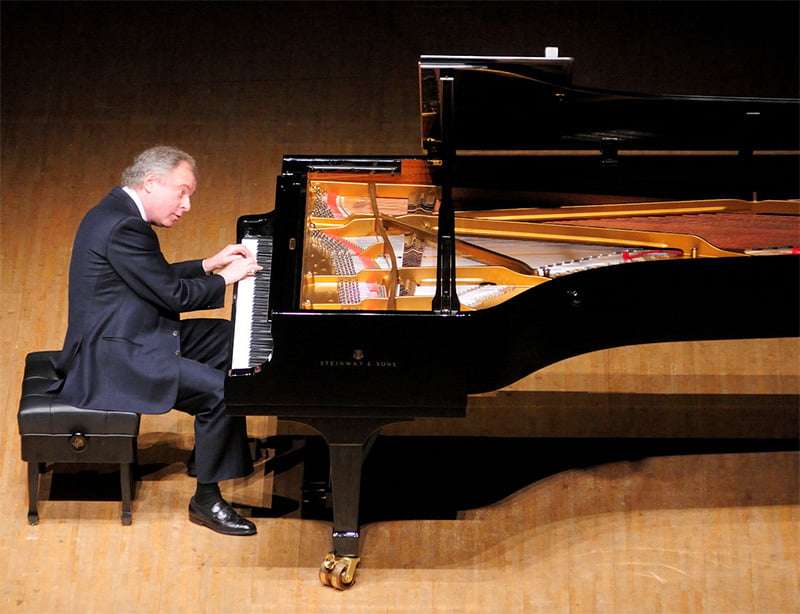 Of all the composers András Schiff has championed – Bach, Bartók, Beethoven, Schubert, for starters – it’s the latter that seems to engage him the most. Perhaps it is because Schubert’s music positively resists a grandstanding approach – although some of it can be very grand – but Schiff’s directness in Schubert and his ability to shade mood and meaning without overplaying his hand continue to take you by surprise with their freshness, inventiveness and profound understanding. And, maddeningly, Schiff makes it all sound so natural and easy. If all that amounts to prejudice, the prejudice was reconfirmed by this recital – all three large-scale works that were the only Sonatas to be published during his lifetime, and the evening steering clear (well, almost) of the more frequently programmed final three.

Wigmore Hall was sold out, and the audience was notably quiet and attentive throughout – the first half lasted an hour and twenty minutes, with D850 following D845 without Schiff taking a pause, and all the repeats observed – the event ending just before 10 p.m., late enough for Radio 3 to pass on Schiff’s substantial encore. (Something made all the more regrettable listening at home when the abrupt curtailment of applause signalled that Schiff had returned to his seat for an extra item, a second before we were whisked back to Broadcasting House, feeling deprived. Sure, the next programme was nearly due, but R3 has a glorious history of being able to run late – Ed.) You could have heard the proverbial pin drop, and there were times when his fortepiano stretched audibility. Schiff owns this elegant 1820s Biedermeyer instrument by the Viennese maker Franz Brodmann, and it once belonged to Karl I, the last Habsburg emperor and King of Hungary. It is both beautiful to look at and to hear, and no tuning or technical gremlins crept in. I did wonder whether the sound is big enough even for the intimate Wigmore, but it proved again that it is the quiet man people listen to.

For all the thematic clarity of the first movement of the A-minor Sonata, its shape is evasive, and however deliberately Schiff played it, the more veiled it became, and, paradoxically, the fortepiano sound, in which the bass doesn’t have the force to swamp the silvery top register, leaves all the detail with nowhere to hide. Schiff was at his most visionary in the passages where the music plunges into huge harmonic vistas, and he went on the catch the shadowy romanticism in the slow movement, a set of variations that could stand alone as a new Impromptu.

Schiff was on equally romantic form in the Con moto second movement of the Sonata in D, for my money one of the loveliest things Schubert wrote, and he turned the moments of direction-seeking stasis to maximum poetic advantage. This was after a first movement of towering energy – I heard someone in the interval refer to it as Schubert’s ‘Hammerklavier’ – in which Schiff sustained a fierce, almost frictionless momentum. Anyone who has heard him in Bartók will know how easily Schiff slides into the most complex dance rhythms, and he bound the Scherzo together with infectiously accented bounce. And again, anyone who has heard Schiff play Haydn will know how deftly the former parries the latter’s artless wit, and Schiff not only registered Schubert’s tick-tock joke in the Finale but also perfectly judged its scale to show off the greater ambition of the first two movements.

In the first movement of the so-called ‘Fantasy’ Sonata in G, the second theme expands into a skein of semiquavers, which has one, just one, tiny mordant decoration that is omitted in the reprise. It’s one of those moments that momentarily articulates the overall serenity of the music, and you know that Schiff knows how important it is, but he doesn’t highlight it with significance. Such a detail goes a long way to informing Schiff’s far-sighted, strongly told interpretation of this compelling work, and resistance to his guidance is futile. His Wigmore Hall-only encore was the anguished slow movement of the A-major Sonata (D959), which sounds even more on the edge when played on a fortepiano.