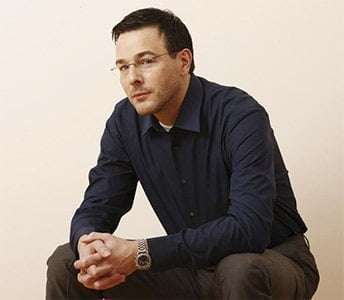 For many the prospect of Andreas Scholl singing in two affecting Baroque religious works will have been eagerly anticipated. Although there was much to enjoy, probably only diehard fans would have been completely enticed by them. Certainly Scholl’s usual seamless tone was everywhere in evidence, with its darker, rounder body rather than icy purity. Although the generally quiet, devotional manner adopted was suited to the subdued and decorous style of the respective settings of the Stabat Mater text by Pergolesi and Vivaldi, these performances tended to be routine rather than showing any great insight into the music or inflecting any striking or stark emotional contrasts. Greater intensity is evinced in Scholl’s recordings of these works.

Pavlo Beznosiuk led the Academy of Ancient Music in an aggressive attack on the opening of the Vivaldi (1712), but this quickly subsided into the generalised character of the overall performance. Scholl expressed some languishing pathos in ‘Quis non posset’, asking “Who could refrain from grieving with that mother?”. And he slightly pointed up the melismas ‘Pro peccatis’ (referring to Christ’s sufferings and death) but there was little disturbance to the atmosphere of private grief. Vivaldi’s setting of Salve Regina (date unknown) is more operatic in style. Klara Ek conveyed this with a reasonably full vibrato and sparkling tone, particularly in the opening section. The final intercessions on “O clemens, O pia: O dulcis Virgo Maria” were more sweetly imploring, but again a mood of contemplative serenity prevailed.

This was the case too in the chosen-from Concerti Armonici (a set of six written between 1725 and 1740) by Count Unico Wilhelm van Wassenaer. To the extent that he is known at all is largely due to Stravinsky drawing upon this music for Pulcinella. Even so, Wassenaer’s cause has had to contend with the double indignity of posthumous neglect and the erroneous attribution of these Concertos to Pergolesi (as Stravinsky believed) a situation only corrected in the 1980s. In the Second, over the gentle pulse given by the continuo, the streamlined concertino (four violinists and a violist) wove their contrapuntal lines like silken threads. The glossy texture remained unruffled despite the occasional diversion to the minor mode, the boisterous writing in the second movement, the potentially rocky dotted rhythms following this, and the moto perpetuo finale (the latter serving Stravinsky). At times the ensemble sounded rather like a consort of viols at higher pitch, and justified the composer’s appellation of ‘Armonico’. Likewise in No.3, the same line-up retained clarity through some dense counterpoint in the opening Grave sostenuto, though in the finale it seemed to become a little tangled and lacked direction. The AAM gave the minor-key second movement a suitably morose character, recalling ‘Erbarme dich’ from the St Matthew Passion.

Lucidity and moderation also informed Pergolesi’s Stabat Mater (1736), not least by hardly rising above forte in volume, even where some fury is expressed ‘Pro peccatis’. The famous suspensions of the opening movement were not milked and the augmented-6th chords in the verse starting “Fac me vere” were like dull throbs of discomfort rather than stabs of pain. Similarly there was no lingering over the appoggiaturas during the instrumental phrases at the opening of ‘Fac, ut portem Christi mortem’. Scholl maintained a quietly focused tone in much of the long sequence of verses, whereas Ek used a wider, fuller vibrato for more operatic sections, and a direct expression for muted moments such as the pointed question “Is there any who would not weep, with the Mother of Christ?”. However, her use of a broad vibrato in the hushed, fervent intensity of the final prayer ‘Quando corpus morietur’ was misjudged.

Overall these presentations would have been ideal in a liturgical context, but one would probably look for more passion and emotion in the concert hall.