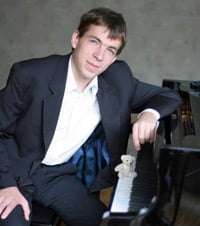 Andrei Korobeinikov is only 21 and yet he has won prizes in over 20 competitions. Which does lead one to wonder whether he actually performs outside of the competitive arena. In fact his website shows that during 2007 he has given over 30 concerts and that he combines this with a Postgraduate Diploma at the Royal Concert of Music. This Wigmore Hall recital was certainly heavyweight and the piano he used – a Fazioli T278 – a powerhouse of an instrument.

In the Beethoven Bagatelles there were a series of question marks. The First piece was marginally too slow to convey the dance rhythms. Number Two needed more humour and the tolling melancholy of the contrasting slow sections of the Sixth were not fully realised. Yet there was also a sense of deep thoughtfulness in the First. The hymn-like section prior to the trills in the Third was exquisitely Chopinesque and in every piece there was a highly individual command of rhythm, which highlighted sections in an unexpected way.

Scriabin’s tremendous Etudes received very powerful performances. Every melodic line was delineated, there was wit and humour and, as in the Beethoven, a conscious highlighting of usually unheard rhythmic patterns. However in the Second, Fourth and Sixth studies the melodies weren’t sufficiently ‘breathed’. Here, the use of that terribly old-fashioned expressive device, rubato, would have paid enormous dividends. But one rather doubts in this antiseptic age, if anything so self-indulgent, is encouraged, or even taught. The Fifth Sonata was enormously strong and the fingers of the pianist’s left-hand were often icily steely. All that was missing in the final pages, was that sense of devilry that Sofronitzky and Horowitz brought to this composer’s music. Korobeinikov, at this stage of his career, cannot give the impression of losing control, while actually being in total command.

For Schubert’s B flat Sonata, Korobeinikov wrote his own programme notes, but was rather OTT in his description of it, which was full of purple passages about life, destiny and humanity. Could the music-making live up to this prose? The opening theme was slow and controlled, the trill emotionally non-descript, while the second subject was marginally too loud and literal and there was no tonal variation. In compensation, the long passage, which presages the player’s opting between the development or the exposition repeat, was superbly moulded at a slow tempo. Thankfully, he chose the repeat and, second time round, both themes were slightly more soulful. In the development itself, there was power and once again attention to rhythmic detail was exceptional and often revelatory. But the movement’s codetta was emotionally ambiguous. Korobeinikov didn’t seem able to decide what the movement was really about, what its emotional core was.

A similar problem affected the slow movement. Both the first and second subjects were slightly too loud and the second – as in the opening movement – brought no tonal contrast. The emotional content was too generalised. And yet the contrasting central section was exceptional. There was no tempo change, the left hand brought a hypnotic, almost nagging, rhythmic base to the rolling melody and the transition to the recapitulation was distinctively voiced with an almost-staccato left-hand. However this rhythmic emphasis was continued in the closing pages and if the artist isn’t careful, it could become a mannerism.

Korobeinikov approach to the last two movements was very individual. The scherzo was fast and the trio sounded improvisatory, while the last movement was launched with a relaxed statement of both themes, which included small ebbs and flow of tempo. This approach, combined with a limited dynamic range, made the movement suggest an Impromptu.

There were three encores. The first of which, a Russian dance, ended with some truly jaw-dropping slow-tolling bass chords. It certainly requires quite a player and quite a piano to produce such sounds, which still resound in my head!

Korobeinikov is the real thing. For all of his occasional lack of spirituality, and limited tonal variation, there is a real intellect at work here. Of all the young pianists I have heard in the last twelve months, he is the one I would most like to hear again.