Aspects of Love
Musical based on the novel by David Garnett, with music by Andrew Lloyd Webber, lyrics by Don Black & Charles Hart, book by Lloyd Webber, Black & Hart 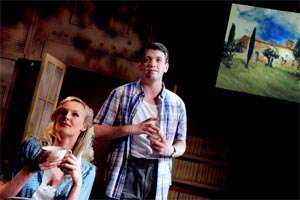 The Menier Chocolate Factory has a habit of taking musicals, scaling them down to fit the relatively small space this Southwark fringe-theatre affords, re-inventing them and then sending them back to the West End with a new lease of life that sometimes also extends to Broadway. Sondheim’s “Sunday in the Park with George” at the Chocolate Factory was a better bet than the original National Theatre production; Jerry Herman’s “La Cage aux Folles” was also an improvement on the London Palladium’s efforts, and is currently a big hit in New York. So too was Sondheim’s “A Little Night Music”; while “Little Shop of Horrors” found a new life in Southwark and the West End and, currently Cy Coleman and Dorothy Fields’s “Sweet Charity” is a hot ticket that transferred from the Menier to the Theatre Royal, Haymarket. 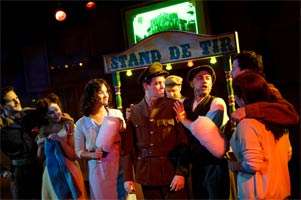 Can Trevor Nunn’s new production of “Aspects of Love” repeat the same success as his staging of “A Little Night Music”? The answer seems to be “yes”. But, then, “Aspects of Love” was originally a favourite with London audiences. From its first staging, again by Nunn, in 1989 it ran for over three years, whereas on Broadway it lasted less than one year. It toured Canada and Australia in 1991 and went on to Japan, the Philippines, Hungary, Denmark and Finland. Another production with David Essex toured the UK in 2007 and the production also went to South Africa. This is the first major London revival and seems to have the legs to go further, but not necessarily to the US, although, New York may now be ready for another go, just as the new London production of “La Bête” is headed for Broadway despite it originally bombing in New York in the 1990s. 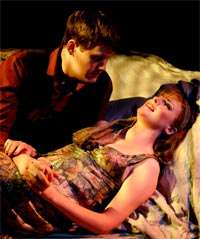 “Aspects of Love” is set in Europe over a period of seventeen years from 1947. It concerns the relationships of a group of people surrounding Sir George Dillingham, an English painter. His nineteen-year-old nephew Alex is besotted with an older French actress, Rose Vibert. Alex makes contact with her when she is in Montpelier and invites her to his uncle’s house. Installed there Rose develops a love for Dillingham senior who already has a mistress, Giulietta, an Italian sculptress. There are further complications when, twelve years later, George and Rose’s daughter Jenny becomes romantically attached to Alex, while a further aspect is hinted at in a possible relationship between Rose and Giulietta. 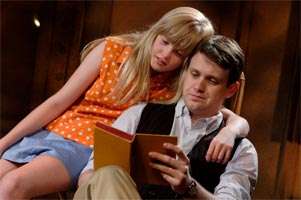 So far, so acceptable, except that the piece is through-sung with the most banal of dialogue being set to music. A suitable comparison would be Sondheim’s “A Little Night Music”, a similar tale of characters trying to organise their relationships in a satisfactory way, in which the songs are conversational but they tell the story in Sondheim’s felicitous turns of phrase. Just look at ‘You Must Meet My Wife’, a scene between the heroine, Desiree, also an actress, and a former partner, Fredrik; or ‘Every Day a Little Death’, in which two women swap experiences of love; or ‘A Weekend in the Country’, the finale to Act One which sets the scene for everybody in Act Two. In “Aspects of Love” everything is on such a mundane level, that you are not drawn-in to care about any of these people and their witless shenanigans.

Musically the score keeps returning to the main theme, ‘Love Changes Everything’, the hit-song that would also be a better title for the piece. Here the score is arranged for seven players to give it a chamber-music ambience which is not unappealing. But it is the words and not the musical element that let the side down. Michael Arden as Alex has a good high voice in the manner of Michael Ball although with more light and shade, bel canto rather than ‘can belto’. Katherine Kingsley as Rose demonstrates why she appeals to men of all ages, presenting a really charismatic personality. Dave Willetts as George makes the older man credible enough, and Rosalie Craig pouts to good effect as George’s sexy mistress.

The ensemble works hard as various peripheral characters who also deliver some of the musical dialogue in passably good French. Lynne Page’s choreography has all the right moves including a jolly knees-up in the style of “West Side Story”. David Farley’s simple but effective designs use a photograph album to provide a charming background for the settings in France and Italy. This scaled-down production by Trevor Nunn may well prove to be its calling-card for the West End and beyond. Now we must wait to see if the Chocolate Factory has another hit on its small but perfectly formed hands.