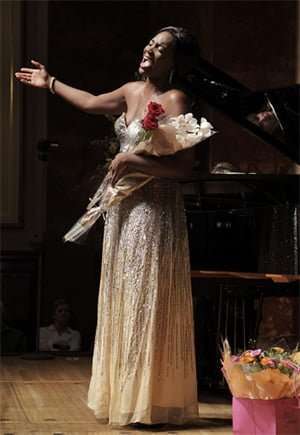 Rosenblatt Recitals are attracting a better class of name these days. After Pretty (Yende), the South African soprano last season comes an Angel from California. Blue was the winner of the Zarzuela Prize at Operalia 2009 in Budapest, where she also finished runner-up in the overall section for female voice.

The programme was more or less the normal shopping-list of styles and vocal demands identifying what the singer can do, as much intended to guide casting staff at opera houses as to entertain the public present at the recital, a sort of monster audition, hence the mixture of opera arias and song, five languages (six if you count Latin!), ending in one complete (and highly demanding) scena. Much anticipation surrounded the singer after her explosive London operatic debut as Musetta at English National Opera. Unfortunately and unexpectedly it was her accompanist Catherine Miller who set the musical agenda for much of the evening. From the very start in her over-loud and muscular introduction to Mozart’s ‘Alleluia’ she set off in front, forcing Blue to use more voice than was really appropriate, turning the piece from an expression of innocent joy into something much more forceful. The singer’s divisions were accurate, workmanlike.

On the plus side there were occasions throughout the evening when Miller revealed telling detail in the instrumental part but too often she indulged in excessive volume, fierce attack and undue prominence for her instrument. One got used to the opening piano note or chord being played one dynamic louder than it should and sometimes worse: the introduction to ‘Ne poj, krasavica, primne’ was played forte but is marked in the score at double piano! This was particularly regrettable as Blue seemed to have an affinity with Rachmaninov. In this particular song she credibly conveyed through vocal colour the cold frisson which the poet Pushkin recounts he experiences when he hears those “sad songs of Georgia”. The Vocalise which followed showed a high degree of vocal control.

The Richard Strauss group, though with rather too many of the old favourites, looked on paper to offer a balance of emotional atmosphere between exuberance, nostalgia and devotion. The interpretation of ‘Heimliche Aufforderung’ was difficult to fault. The hedonistic atmosphere of the party was created and contrasted with the promise of private tranquillity which awaits the lovers. In ‘Die Nacht’ some genuine soft singing and playing was to be heard, in contrast to ‘Wie sollten wirge heim sie halten’, which was frankly disagreeable to listen to. The theme may be sexual energy but it sounded here more like an attack by an artillery battery than an expression of human passion, and few words could be discerned.

Blue took time out before the last song of this quintet, ‘Befreit’, to explain its personal significance to her since the death of her father and to dedicate it to him in the presence of her mother. One could have inferred that this was something special for the soprano without the introduction, so explicit was the feeling she injected into her treatment of the three verses. Her tone was almost overwhelming in its warmth, intensifying even more strongly through a powerful crescendo and culminating each time in the cry of “O Glück”. Miller withdrew politely into the background with the solemn, plush chords which mainly support the voice.

Returning to the platform for the second half with her whole body now swathed in gold sequins where previously only her top half was thus attired, I wondered if Blue was trying to tell us we were now to hear the full artist in opera. If so, it was difficult to disagree. ‘Summertime’ (Porgy and Bess) was given as good a performance as I have heard this exquisite lullaby receive, with Miller this time being an equal partner in what was pretty much a duet. The operatic contingent in the audience, who had been subdued during the first half let fly after each aria. I did not find their cries of “brava” after her ‘Vissi d’arte’ (Tosca) properly justified, nor was the comparison with Leontyne Price which one heard being bandied about borne out in the event itself; the dusky timbre in the middle and lower range possessed by the great American soprano is not at this point shared by the Californian. The absence of rubato in the body of the aria and the cutting short of the final “così” left one hungry for greater attention.

Blue laid claim to the lyrical Wagner with Elisabeth’s greeting from Tannhäuser, its opening and closing phrases notable for her incisive attack, while Adriana Lecouvreur’s self-introduction showed her ability to soften and then to produce a thrilling final crescendo. By ending with the complete scena of Violetta (La traviata), Blue would have us see her as a versatile artist with at least pretensions to have what is traditionally declared to be necessary for a Violetta, namely three sopranos of different types, one for each Act. The recitative was eloquently sung, with VIoletta’s dilemma clearly felt. ‘Ah, fors’è lui’ was given in quite a fast tempo, with generous portamento and a decent cadenza. On the minus side the pianist’s emphasis on bringing out so strongly the triplet figures in the accompaniment where Alfredo can be heard singing “A quell’amor…” was absurd. The cabaletta brought several members of the audience to their feet, bewitched it would seem by the singer’s power and crackling high notes. I heard nothing more than those superficial features, hollow and bereft of characterisation or at best a crude attempt at one. Perhaps we should have known that the best performance from music-theatre in this recital had been given half-an-hour earlier in the zarzuela song, such a richly entertaining piece with such witty use of flamenco elements and so brilliantly orchestrated in the original. Singer and pianist alike seemed to delight in its ingenuity.

The two encores were the spiritual ‘Ride on, sweet Jesus’, colourfully done, and ‘I could have danced all night’ from My Fair Lady, both showing a command of the idiom and the latter ending high in the vocal stratosphere. This was, then, only a partial success for a singer who has the ability already to wow an audience. She has aroused such interest largely because she appears to have the features of a coloratura, lyric and even lyrico-spinto. One hopes that she will not make the mistake of spreading her talent too thinly.