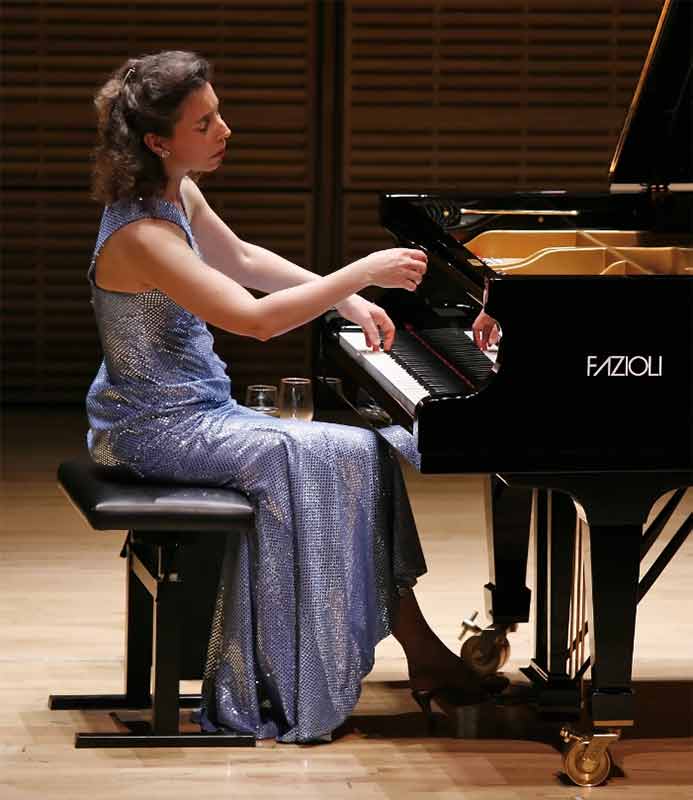 In the first recital of the Southbank Centre’s 2015-16 International Piano Series (with the Queen Elizabeth Hall programmes transferred to St John’s, Smith Square), Angela Hewitt covered both the period with which she is still most identified before moving on to classical and romantic heavyweights. It was a big recital, with a broad stylistic reach, wide spiritual and emotional horizons and demanding a tough virtuosity; and, as in all her concerts, it was clear that, despite her tireless presence in halls, recording studios and online, she hasn’t lost that knack of potent individual connection.

The sighing baroque emotion at the start of J. S. Bach’s Capriccio “on the departure of a beloved brother” reminded us of the fluid focus and momentum that defines her Bach playing, with pale echo effects, wither-wringing sobs and sighs and jolly horn calls adding to the detail of this surprisingly heart-on-sleeve work. Her Fazioli piano was fine for her range of colour and attack, although its sound was generally more clipped than resonant, with its characteristic brightness toned down.

Her group of three Domenico Scarlatti Sonatas showed off the piano at its best in terms of light and shade, and Hewitt’s technical freedom was completely inside the music’s character and on top of its fabulous flashiness. The occasional smudge indicated what a high-wire act these works are, with a blur of crossing hands, spitting repeating notes and rhythmic bounce giving the fanfares of the D-major Sonata a sparkling clarity and energy. The scope of Scarlatti’s compressed masterpieces never fails to astonish, and they sound right up this pianist’s street. Returning to her core repertoire, Hewitt enhanced Bach’s C-minor Partita with her signature limpid articulation, pedalling finesse, dance-like lightness and magical adroitness in the decorations.

Her flamboyance and sturdy technique were more obvious in Beethoven’s ‘Les adieux’ Sonata, but she retreated for a distracted song without words in the ‘Absence’ middle movement. The high spirits of the ‘Return’ Finale and the weight she brought to the famous bell motif made a fine contrast to the warmth and affection of the touching epilogue.

I am undecided whether Hewitt and Beethoven are an ideal match, but have no such reservations about her and Liszt. Hewitt’s conviction in his lofty rhetorical extremes was poetic on the grandest scale, with beautiful separation of line, attention to registration and a flowing sound at the service of Petrarch’s rapt vision of angelic grace in Sonetto 123. I was amazed, at the end of such a big recital, by the stamina she had in reserve for the ‘Dante’ Sonata, an epic display of pyrotechnics at their most infernal, her weight of tone and skillfully graded dynamics giving way to ravishing delicacy in the spectral Andante section. The lift-off of visionary power at the end was overwhelming. After such blood and thunder, Hewitt’s encore left us with the sober Protestant corrective of her own arrangement of Bach’s ‘Alle Menschen müssen sterben’ (BWV643).