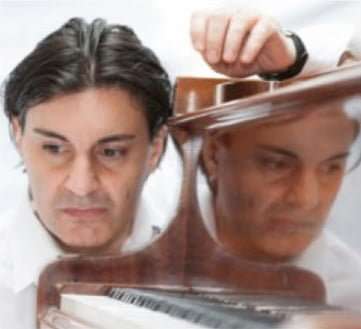 Now in his mid-forties, Australian-born, London-based Angelo Villani has been away from the concert platform for more than two decades – since 1990 when a trapped nerve in his right shoulder prevented him participating in the Tchaikovsky Competition in Moscow. In the interim a search for treatment, several years working in Tower Records, and the occasional private recital as well as teaching responsibilities have occupied his time. His return to public performance was late last year. Villani continued here at St John’s with a programme of mostly contemplative pieces, for which his tempos were unusually expansive. Such interpretation came with different degrees of persuasion.

Quite clearly, each note played has significance for Villani. That can be very positive, for music does not (should not) conform to the second-hand of a kitchen clock. Yet, each composer’s music needs to be explored for their intrinsic qualities. Villani’s subtle approach, with nothing forced, is certainly a godsend, and he seems to commune with the piano as the most expressive of instruments; like Radu Lupu, Villani does not do percussive. The first-played of the Debussy Préludes was fully mysterious, visionary even, the piano’s keys barely touched. I was reminded of the great and extraordinary conductor Sergiu Celibidache (1912-96) whose slower-than-normal tempos were controversial albeit, to those understanding why, transfixing and revelatory, and always determined from inside the music combined with rationales derived from the Cosmos and science.

Saying something is ‘slow’ in terms of musical performance is pejorative; everyone will have a different opinion as to the rightness of any tempo; and the performer’s force of personality can convince an interpretative viewpoint, however individual. Villani played with conviction, which worked well enough in the first two Debussy pieces; second up, ‘The Girl with the Flaxen Hair’ was chaste and intimate at a daringly time-taken and inward approach, but the pianist failed to persuade in ‘Minstrels’, the rhythms analysed as if this were a first read-through (which it wasn’t of course). The Chopin though was exquisitely sounded and voiced, quite secretive. But the following Tristan tipple did not live up to the expectation of its written description. Citing Hans von Bülow’s piano reduction of the entire music-drama and Villani’s own “quasi improvised metamorphosis” of the Act Two love-duet suggested something rather more than we got, which was essentially if not exclusively Liszt’s familiar transcription of Isolde’s ‘Liebestod’. Villani’s rendition had feeling and weight though, smouldering with passion, and was powerfully built and climaxed.

And so to the interval, which at thirty minutes was ten longer than usual. It was irritating to be left hanging around for seemingly no good reason, and which certainly tested the patience, as to an extent did a further selection of languorous pieces when given with this musician’s degree of expansiveness. There was no doubting Villani’s poise with the Alkan, and two of Liszt’s Petrarch Sonnets were richly expressed, although applause between them broke the mood that the pianist carefully crafted. The composer’s large-scale B minor Ballade was then a great success even with several minutes added to your averagely timed account. There was nothing ‘standard’ about Villani’s way with it, which was expectant and exploring, the work’s expanse plotted with sureness, concentration and a wide dynamic range. Two encores followed, again meditative and leisurely recreated, very beautiful … but … and if I missed the name of the second one, the first was anyway unannounced, then it’s possible that both were Grieg Lyric Pieces.

It must be always be quality before quantity. However, with ‘only’ about 70 minutes of music (even in Villani’s generous readings), a better stratagem would have been to play these pieces as an uninterrupted sequence, requesting no applause and eschewing a break, for both only emphasised the bitty and samey nature of this programme.

Of course one wishes Angelo Villani much success with his return to public performing and it would be good to hear him again if in a wider-ranging selection: for example a first half consisting of some witty and dashing Haydn, then one of the big Beethoven sonatas or Brahms’s F minor, with the second half to include some 20th-century fare – punchy Bartók or Prokofiev, which would also have enlivened the present recital.